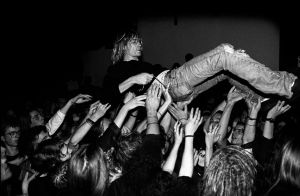 An overbearing novice director with “napoleon complex“Screaming at the top of his lungs. 500 extras out of control and provoking”a fucking chaos“. And in the middle of it all, a trio with the name of ‘fullness and inner peace’ – Nirvana – and an emblematic song: Smells like teen spirit. On August 17, 1971, Kurt Cobain, Chris Novoselic and Dave Grohl recorded a video that would change their lives forever. The images shot that strenuous day gave rise to one of the most iconic clips in rock… the one that propelled the group to stardom, the one that left them splashing around in the ‘mainstream’, the one that reflected his anarchic spirit and that of his fans.

Smells like teen spirit was the first single from never mind (1991), second long duration of the trio of Aberdeen (Washington). Although the concept of the video – Nirvana playing back in front of a young audience in what looked like an abandoned gym – it might seem like ‘more of the same’, it really wasn’t. Cobain had one goal in mind: to provoke the chaos. He wanted it to be a ‘teenagers rally in hell’. It was inspired by two of his favorite movies: the Ramones’ musical comedyrock and roll high school‘ and yet another, a 1979 cult film about teenage rebellion (which in Spain was called In the abyss):

“I saw this movie Over The Edge”, counted Cobain on Melody Maker in 1993. “I remember I left the theater and almost everyone who had been there ran out screaming, breaking windows, vandalizing and wanting to get high. It totally affected them, influenced them. That may not have been the intention of the person who made the movie, and it’s a great movie, but that’s what happened”. And that’s what Cobain intended: cause the same level of total chaos in every city in America.

A rookie director and 500 extras

He took charge of the direction Samuel Bayer, a recent graduate of the School of Visual Arts in New York. It was his first project in the music industry. The extras were recruited at a concert by the group at the Roxy in Los Angeles, handing out hundreds of flyers to attendees: ‘Nirvana needs you to appear in their next video, Smells like teen spirit. You must be between 18 and 25 years old, adapt to a high school character, be it posh, punk, nerd, jock… and be prepared to stay for several hours! Come support Nirvana and have a good time!”

Come support Nirvana and have a great time!

On August 17, 1991, At 11:30 in the morning, Kurt, Chris and Dave arrived at the GMT studios, located in Culver City, Los Angeles, California. There were also the 500 extras who had come “to support Nirvana and have a good time”. The shoot took longer than expected.. They were exhausting hours for everyone… and that the extras who played the public were true fans of Nirvanaturned out to be essential.

“He had a bit of a Napoleon complex”

Right from the start, the personality of manager Samuel Bayer infuriated the band. “He had a bit of a Napoleon complex.Cobain explained in the book Come as You Are: The Story of Nirvana. The director berated the extras and tried to control the band in an authoritarian way. “I couldn’t believe we had to go through that. It was like we were in school. He was the evil teacher.”. It was also not to the liking of drummer Dave Grohl: “He had a loud megaphone,” recalled in Newsweek in 1999. “I was trying to explain the concept to the audience, and I was like, ‘Okay, now, in the first verse you guys are supposed to look bored and unhappy. Sit in your seats and stamp your feet.’

“It was fucking chaos”

As the filming progressed, the tension increased.. Cobain, between one take and another, he had good shots of Jim Beam whiskey. His mood was getting worse by the minute. His frustration was becoming more tangible. At the end of the afternoon, when he noticed that the irritation was also reflected in the faces of the fans, he made a decision. He convinced Bayer to let young people lose their inhibitions. The video needed an anarchic ending: the students approaching the stage and freaking out. It would be the final scene. And that was how Cobain he encouraged the extras to come to the stands and do the hooligan. That everything seemed like a real punk rock show.

“… the audience started destroying the stage, it was completely out of control… it was fucking chaos,” remember Grohl in Newsweek. “The director on his loudspeaker was yelling ‘Stop! Cut!’ yelling at the top of his lungs for everyone to calm down, threatening to kick them out. It was actually quite a funny situation, seeing this man trying to control those kids who only wanted to destroy… from that moment on it was when everything started to make sense to me: this already seemed like a Nirvana concert”.

“This is the most beautiful thing I have ever seen!”

“When the kids came over and started dancing they said ‘fuck you’, because they were so tired of putting up with Bayer’s shit all day“, I note Cobain. But the director also realized then how successful that burst of energy had been. “The band was cheering them on. By the end, I was exhausted. It was like, ‘Okay, you want to destroy the set? Come on, destroy it,'” confessed in Rolling Stone. “And the guys came down from the stands, and it was like, ‘Oh my God, this is the most beautiful thing I’ve ever seen!’ He was like, ‘God is on my side.’ minute of the video“.

There are, however, some elements of the clip in which Samuel Bayer prevailed. For example, Cobain I wanted the cheerleaders shown dancing with the pom poms to be girls.”really ugly and overweight“, because “he was sick of stereotypical prom queens”. But the director wanted attractive women, recruited from local strip clubs. “Kurt hated Sam Bayer,” noted Courtney Love in New York Magazine in 2011. The leader of Nirvanameanwhile changed the ending – against the wishes of the director – and inserted a sequence of his own face leering at the camera. 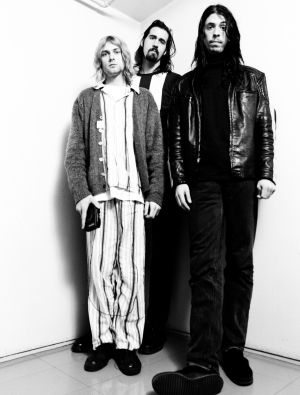 “The video was probably the key element for the song to become a hit.” remembered Dave Grohl in Louder. “People heard the song on the radio and thought ‘it’s great,’ but when they saw the video on MTV they thought, ‘That’s great. These guys are kind of awful and they’re trashing their fucking high school.’ Thanks to the video, more people came and the clubs got bigger and bigger. Finally, that unrestrained outburst of teenagers – even breaking up and taking the equipment – helped make of Smells like teen spirit the legendary video it became.

Nirvana: ‘Smells like teen spirit’, a “fucking chaos” directed by a rookie with “Napoleon complex”