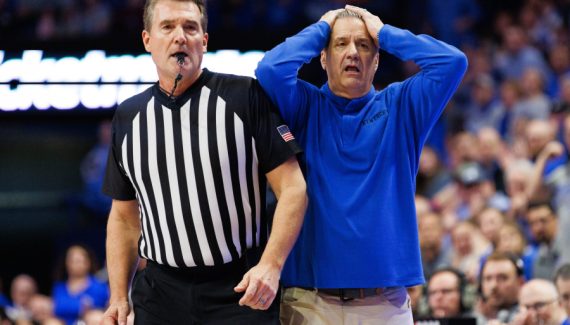 There was a time, not so long ago, when Kentucky was at the top of college basketball. The best high school students in the country followed one another, each year, in the ranks of the workforce of the Widcats. Rapper Drake, an unofficial “superfan” of the program, took part in a team warm-up in 2014, and introduced the roster to fans during the 2017 preseason, a hoodie “Kentucky Dad” on the shoulders. The magazine slam dedicated its front page to John Calipari the “Hit Maker”, when John Wall and DeMarcus Cousins ​​joined his team in 2009, before wondering if the 2014/15 version (that of Karl-Anthony Towns and Devin Booker), undefeated for 38 games before losing in the national championship semifinals to Wisconsin, was the best college team of all time.

There was a time when Kentucky was the biggest behemoth in the university landscape, both sportingly and in the media. But that time is now over. The era of Wildcats dominance is indeed a thing of the past. The epics of Kentucky until the “Final Four” of the NCAA tournament, stage of the competition reached in 2011, 2012, 2014 and 2015 for the last time, with a title in 2012, also begin to go up.

They are also far from John Wall, Anthony Davis or Karl-Anthony Towns, these “freshmen” selected in first position in their respective Drafts after a season in Lexington.

A reality now impossible to deny

In fact, for a little over five years, the John Calipari era in Kentucky has been floundering, a little more each year. And what happened this week may have embodied, for good, the beginning of the end.

While the Wildcats have generally struggled to convince and chain with regularity since the start of the season, losing places in the AP Top 25 every week, even getting out of it, these last few days have indeed accentuated the tumble of John Calipari and his men, and more broadly the lowest point of a slow and agonizing decline in the sports results of the Lexington program for several months.

First there was, this weekend, a violent slap received on the floor of Alabama, the best team in the SEC conference this season, ranked 4th in the Top 25 this season: 78-52 in favor of the Crimson Tide !

Nate Oats’ squad, led by sensational “freshman” Brandon Miller (19 points and 7 rebounds) and pair of experienced guards Mark Sears (16 points, 6 rebounds, 4 assists and 6 steals) – Jahvon Quinerly (12 points and 2 assists), giving a basketball lesson to that of John Calipari, distressing inefficiency and predictability in attack (29% on shots including 25% from behind the arc, 7 assists for 11 ball losses) .

Before hitting bottom a little more three days later, this time at home against South Carolina (68-71), a modest SEC team, which had won only 7 of its 15 games before this trip to Lexington, where she had not won since 2009. This time showing herself unable to slow down defensively a team holding the 220th best offensive rating in the country only, and who committed 15 loss of ball during the meeting…

A locker room that seems to have abandoned

While critics streamed in the direction of John Calipari after this humiliation, Oscar Tshiebwe, the pivot of Kentucky, was him more pragmatic: the defeat was above all the responsibility of the players.

The “Player Of The Year” last season notably pointing to a glaring lack of solidarity and effort on the part of his teammates on the floor, facing a team infinitely weaker than the Wildcats on paper. One more proof of a disorganized and out of sync team, perhaps even fractured, in the locker room…

” Some of us take things for granted “Plagued the Congolese pivot, in difficulty like all his team, but irreproachable in his attitude. ” I give credit to our staff, they prepared us well for the game. But they can’t play for us, like I told my teammates […] Some of us are not ready to fight, to defend this jersey. Representing Kentucky is a responsibility. If we don’t want to fight to defend this name on the front of the jersey, it will be difficult to win. »

Then the leader of the Wildcats to insinuate that the rotation, for the rest of the season, should now work on merit. ” We have to be better, that’s all. I’m just asking for anger. I was telling Coach Calipari that from now on, if a player doesn’t want to fight, he has to go out » he added. ” In my opinion, it was the worst loss in Kentucky history. We can’t lose like that, against South Carolina. It makes me mad that some of my teammates haven’t worked harder. »

If he still manages, for a little over five years, to shine in the field of recruitment and to send many players to the NBA in major roles (Tyler Herro, Tyrese Maxey, Shai Gilgeous-Alexander or Jamal Murray in recent years ), “Coach Cal” no longer gets his hands on very big fish, as he had been able to do with John Wall, Anthony Davis or Karl-Anthony Towns, but also Derrick Rose before, in Memphis.

These big fish preferring to join other “Blue Bloods” (Paolo Banchero at Duke, for example), or programs that are less sportingly ambitious, but calmer and less exposed to the media (Ja Morant at Murray State or Cade Cunningham at Oklahoma State, in particular ).

And logically, since the level of talent which arrives each year in its workforce has diminished over the years, the quality of the sports results of the program has then declined.

Proof of this: since its defeat in the Final Four in 2015, a semi-final against Wisconsin, Kentucky has not reached the final four of the “March Madness”. Worse still: from year to year, John Calipari does less well each time than the previous year. From the “Elite Eight” in 2019 (fourth round, the last step before the Final Four), to the program’s worst season (9 wins and 16 losses, no March Madness qualification) for almost 50 years in 2021 (the 2020 edition of the NCAA tournament having been canceled due to the health crisis), to a first-round elimination against the unlikely Saint Peter’s last year.

Slowly but surely, brutally but inexorably, Kentucky, under John Calipari, is thus sinking, and this week’s double debacle certainly embodies the lowest point ever reached under the leadership of the 63-year-old technician, in office since 2009 .

Next for him? Buckle up. Because the next few weeks promise to be hectic in Lexington.

John Calipari can indeed feel that he now has the pressure of the result. While the Wildcats were considered favorites for the national title this offseason, they likely wouldn’t even be selected for the NCAA Tournament if the season ended today. Fortunately for him, this is not the case, and he still has time to save what can be saved from this exercise. But above all, the name of the Kentucky coach, during the next few weeks, should be frequently associated with the position of “head coach” now vacant in Texas, after the dismissal of Chris Beard last week. According to the first rumors, the first contacts between the Austin-based program and the coach have already been made…

Thus feeding the highly credible theory of a departure next spring, in the event of failure to save this badly embarked 2022/23 season. A scenario that would relieve a huge part of the Wildcats “fanbase”, like this spectator fired from Rupp Arena, the Kentucky hall, on Tuesday evening after holding up a sign with the inscription could not be clearer, and which would perhaps -be the best outcome for both sides.