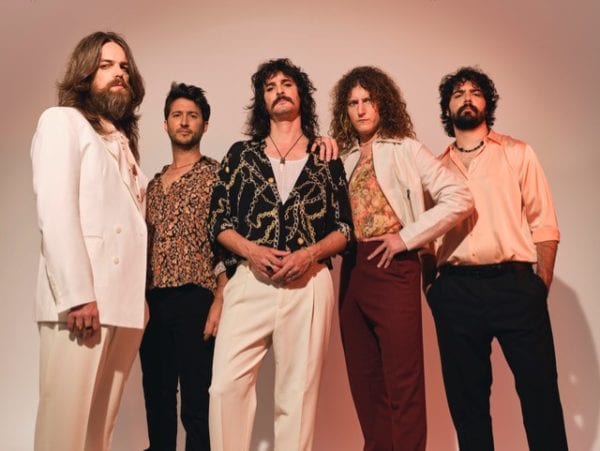 Despite turning eight decades old, rock is still alive and filling large venues. And the Zaragoza City Council has prepared a varied selection for the Pilar festivities, with Tako and La Pegatina as the biggest draws, both at the Goya Fountain in the Plaza del Pilar. But there will be room for guitars of all kinds to resound in the streets and squares of Zaragoza: From the metal of Angelus Apátrida or Darmage, to the post rock of Godspeed You! Back Emperor, going through the Andalusian rock of Derby Motoreta’s Burrito Kachimba or the author of Diario Fantasma. In total, 14 concerts that keep the flame of rock alive.

On Saturday the 8th, the stage of the Fuente de Goya will be inaugurated with the concert by La Pegatina, so the party is more than guaranteed. The Catalans, with their successful mix of ska, rock and rumba, have always been known for offering energetic and fast-paced performances. They will present their new show, “Hacia Otra parte”, with a renewed staging, more energetic than ever, at the height of what their music suggests.

The most classic rock will make an appearance in the Plaza del Pilar on Friday the 14th, with Tako, Layla Añil and Diario Fantasma. Tako’s 2022 tour is an acknowledgment to the followers of the Ejean band based on the most ambitious technical project they have undertaken to date. Two hours of show in which they will review their most acclaimed songs. Layla Añil became known just a year ago through the publication of her first solo work, “A miaround”, which sonically traverses author rock, indie-pop and folk. Diario Fantasma is the project of Malaga-born musician and cultural agitator Diego Meléndez, who has lived in Zaragoza since 2012. He recently completed his first tour of Mexico, which has taken him to 12 concerts in 5 weeks. Now, they are preparing their second album “Your magical fan”, and “La tour de la revancha” has just started, which will take them all over the Spanish geography.

Last year they swept their visit to the Winter Garden, now Derby Motoreta’s Burrito Kachimba will return to Zaragoza on Monday 10th to demonstrate that they have one of the most powerful live shows of the moment. With their first self-titled album, with its mixture of rock and Andalusian tradition, they have already positioned themselves as one of the most interesting Spanish bands to follow. Confirmation came last year with the magnificent “Black Thread”, with which they further refined their powerful proposal. Of even more recent formation are Salto. This Maño-Argentine quartet based in Barcelona, ​​part of a sound heritage halfway between indie and 90s shoegaze and evolves towards the present with precision and freshness, creating songs that, live, will reach their maximum exponent.

On Friday the 14th, Bladimir Ros, one of the most restless groups in Zaragoza, will perform. His sound is located in the coordinates of Nick Cave or Tom Waits, although with his own personality, with a more tavern point.

The Catalan singer-songwriter Joana Serrat, who could be classified as a lover of classic American sounds (with Bob Dylan in the lead), will offer one of her energetic concerts in the La Paz park on Wednesday the 12th. She will present her latest work, “ Hardcore From The Heart” (2021), in which he embraces dreamlike folk and has earned great critical acclaim.

The space, located in Parque Grande José Antonio Labordeta, will open its doors on Monday, October 10 with a luxury concert: Godspeed You! Black Emperor. Canadians, one of the great exponents of the so-called post-rock, will visit Zaragoza for the first time and admission will be free. Without a doubt, a concert called to be almost historic. The band has been making a name for itself for more than two long decades thanks to a sobriety and instrumental excellence unique in its kind. Records like “F#A#∞” and “Lift your skinny fists like antennas to heaven” are authentic classics of the genre for which time has not passed. The day will be rounded off with the renowned guitarist Tashi Dorji and the Zaragozans Les Conches Velasques, who move between Mudejar-style rock and popular music without a people, contemporary and universal.

Tuesday night, also with free admission, will feature the hardest and most restless rock of the moment: Angelus Apatrida and the Zaragozans Darmage and Nuestroctubre. Formed over 20 years ago, Angelus Apatrida have more than earned their reputation as the greats of modern thrash metal. One of the few Spanish bands to enjoy sustained international recognition, since bursting onto the scene with their debut in 2000, “Evil Unleashed”. Darmage have been one of the best exponents of Aragonese metal since 2010. “Witnesses” and “Sin cara” are their latest singles, with which they have not lowered their anger. A similar time and the same relevance have Our October. “From the glass” and “The fire” are his last very powerful songs.

Tickets for the Winter Garden concerts are now on sale at https://compraentradas.ibercaja.es/zaragozacultural/public/janto/#