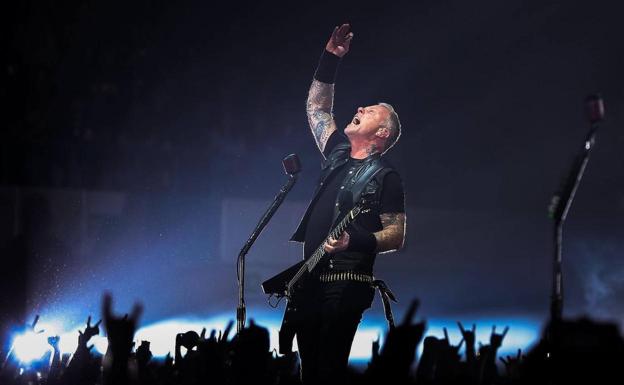 James Hetfield during a concert. / ef

The concern grows after one of the members has tested positive for Covid, although the promoter Live Nation maintains the appointment since “the group has not communicated otherwise”

Metallica has announced “with deep regret” on its social networks the cancellation of its concert tonight at the Fraunfeld Rocks festival in Switzerland after the positive in Covid of one of the members of the band. The message does not refer to the next commitments of the legendary heavy metal group from San Francisco, which plans to perform in Bilbao on Sunday as part of its tour to commemorate the 40th anniversary of the founding of the band, although the promoter Live Nation maintains the appointment since “the group has not informed us otherwise”.

The concert, which is part of Bilbao Bizkaia Rock Day and includes the participation of the Bizkaia Provincial Council and the Bilbao City Council, is scheduled for San Mamés and will also perform, starting at four in the afternoon, Weezer, The Hellacopters , Nothing But Thieves and The Regrettes. The Metallica concert is announced for ten at night. There are still seats available for this festival, whose tickets have been sold at prices ranging from the cheapest in the stands, at 89.5 euros, to seats in the Golden Vip Ring, at 277.5 euros.

The group led by James Hetfield (guitar and vocals) and Lars Ulrich (drums) was the headliner at Fraunfeld Rocks, a one-day festival held this Wednesday that includes other bands such as Five Finger Death Punch, Sabaton, Eluveitie or Fever 33. In fact, it was announced as the only performance in Switzerland by the American band.

Metallica has issued a statement in which it deeply regrets not being able to perform at the festival and apologizes to the fans who had planned to see them. “Our intention was to reschedule the concert, but after trying overnight with local promoters, we have unfortunately found that it was not possible to relocate it this or next year,” they explained.

In the announcement of the suspension, no reference is made to the following commitments of the band, which has a concert scheduled at the Belgian Rock Werchter for this Friday, before its visit to Euskadi and the concern among the fans is growing, although the promoter Live Nation maintains the appointment since “the group has not communicated otherwise.”

Precisely, the Belgian festival has published a message in the middle of the morning, given the number of people who have contacted asking about a possible suspension of the concert, in which they explain that they are in contact with the Metallica team and that the musicians remain hopeful. to be able to perform this Friday.

#Update A quick note as many of you reach out to us. We are in contact with @Metallica‘s team. They are hopeful to play at Rock Werchter this Friday.

After the concert in San Mamés, Metallica plans to perform on July 6 at Mad Cool in Madrid, with sold-out tickets.

The heavy metal group is embarking on an extensive world tour that made headlines in May after James Hetfield had a moment of weakness during a concert in Brazil. At one point in the performance, the voice of such iconic songs as ‘Nothing else matter’ or ‘Enter Sandman’ sank and broke down in tears before the thousands of fans who were stunned to see the collapse of the band’s leader, who began to address the public to be honest. «I felt that I am already old, that I cannot touch this shit. That’s what I was saying in my head, “Hetfield said, before being supported by his bandmates and the applause of the public.