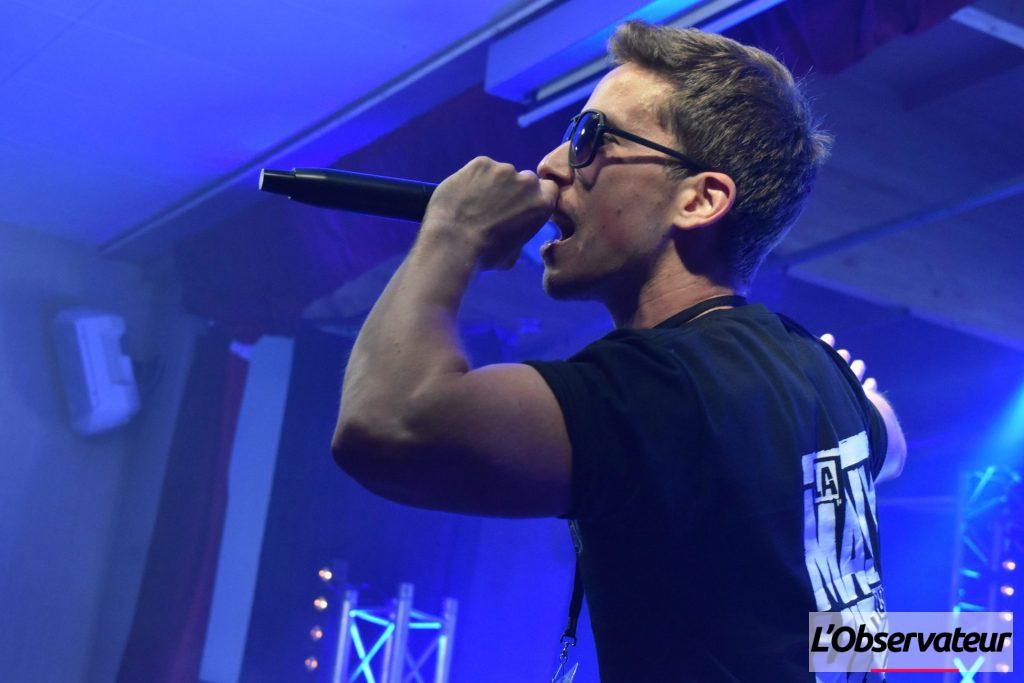 On Saturday May 21, the “La Masny du hip-hop” event made its big comeback 17 years after the last edition. Amar Bouhalfaya, mediator of the city, organized the event with his association La Mise en Scen’ in partnership with the municipality but also the Football Club of Masny, the interco Coeur d’Ostrevent…

This year, the event was part of the Tiot Batiche festivities (advanced because of the legislative elections). It was therefore after having taken a ride on the carousel or drank a cherry beer that the spectators converged around 6 p.m. in the direction of the Edith Piaf room, under the scratches of Dj Bidx. The gauge was limited to 200 seats and all had been sold out beforehand.

Local rappers Mad Zac and Najim were the first to get the ball rolling to warm up the audience before the fairly early arrival (7:30 p.m.) of the legendary Rim’k, who obviously had some imperatives afterwards. The member of the group 113 made his entrance on the famous title “Air Max” (made in collaboration with the rapper Ninho). What mood the public instantly.

The public is heterogeneous and family: children, teenagers, young adults, older people… With more than 20 years in the business, the rapper from Vitry (94) has no trouble getting everyone on board in his universe, between rather modern rap titles (Cellophané, Cosmos…) but also his old-fashioned successes with 113 or the Mafia K’1fry (Tonton du Bled, Pour ces…), all interspersed with music from the bled in good Franco-Algerian and proud of who he is.

At the end of the show, before leaving in his black van, the artist took part with pleasure in the game of photos with his fans of course, but also with the elected officials of Ostrevent: Lionel Fontaine, Frédéric Delannoy, Alain Bruneel…

It’s hot in the Edith Piaf room, some take advantage of the intermission to cool off at the bar run with good humor by FC Masny.

Difficult to pass after Rim’k. It is however the mission which is entrusted to the douaisien group Support Intellect. Jano, Noache, NK and Dj Ludo aka SLH were also making a comeback. These veterans experienced the great Masny era of hip-hop in the early 2000s and they too took a long break afterwards. Today they are fathers of families. Noache will also invite his son with them to sing on stage. A moving moment.

It is then the turn of 3ème Œil to set foot on the stage of the Edith Piaf hall. And if the mythical group from Marseilles had its hour of glory during the 90s, its titles have not necessarily crossed the ages. Boss One and Jo Popo aka Mombi had a little trouble getting the public on board. They will have at least pleased a few veterans and will manage to wake up the public at the end thanks to a mix of Cypress Hill and Kris Kross.

Many young people (15-25) are impatiently awaiting the arrival of northern rapper Bekar. It’s done around 10:30 p.m. Although few in number, his fans are pumped up and determined to sing all his songs in chorus with him. And he will need it because the Roubaisien is on the verge of losing his voice. “My heart and my head”, “Window on the Sea”…. His very requested featuring with the other Roubaixian ZKR, “59db”… Although still emerging in the French rap landscape, the artist already has big titles to his credit and is promised a very good career. That evening in Masny, he will nevertheless deliver a “minimal” show and a little shortened because of his voice, despite the support of his DJ Hagrid, his manager and especially the public.

In summary, for the great return of the Masny of hip-hop, the association La Mise en Scen’ has won its bet by offering a great evening to all generations for a moderate price. The Rim’k show alone was worth the 15 euros. And we have no doubt that the organizers will learn from this event to come back even stronger next year.