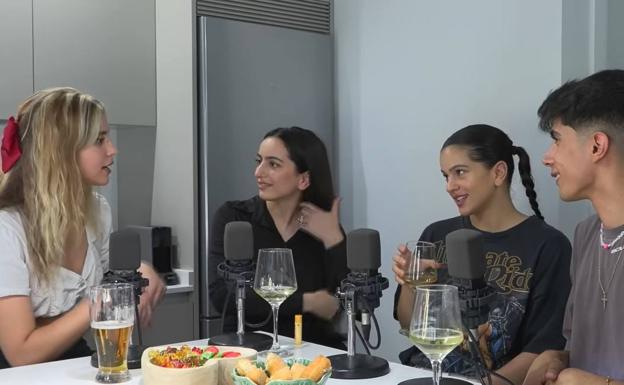 Mariang (left) and Carlos Peguer (right) with Rosalía and her sister Pilar (center) during the last program of the first season. / YOUTUBE: THE PIJA AND THE QUINQUI

In less than a year, ‘La Pija y la Quinqui’ has become one of the most listened to podcasts, which is mainly successful among generation Z

After the success of the first season, the ‘La Pija y la Quinqui’ podcast has been renewed for a second installment, which already tops the list of the most played podcasts in Spain. But now they have the support of Spotify. The streaming platform has signed Mariang and Carlos Peguer to continue giving free rein to a casual and fresh program that has conquered the Z generation. this industry that has not stopped growing in recent years.

At the beginning of 2022 they broadcast the first episode and in July, as a closing to the first season, they had Rosalía and her sister Pilar as guests. Without a company behind or a producer, Mariang and Carlos managed to get the Catalan, in the middle of her tour with the album ‘Motomami’, to come to her program. And it is that Rosalía has declared herself a fan of ‘La Pija y la Quinqui’. In this podcast it was where the artist revealed the origin of the gesture that she repeats in all her concerts when she performs “Bizcochito” and that she has become a meme all over the world. A very funny interview where the public was able to learn more about Rosalía and her sister, Pilar de Ella, who works as her stylist.

Although the interviews have not been the usual format of its first season, it is a genre that they are going to exploit now that they have more impact. The 23 and 22-year-olds premiered on YouTube without fooling anyone: “We have decided to make a podcast to earn money because we don’t have any.” Without mincing words, they give their opinion in each episode on various topics: relationships, love or mental health. Issues that deal with a lot of humor and from their own personal experience. A space that they dedicate to complain about everything that bothers them in this world, and show their addiction to romantic love and monogamy. Some reflections that have gone viral on TikTok, the social network where they gather the largest number of followers.

“People see us and say how is it possible that these two people are friends.” With this phrase, Carlos summarizes and explains where the name of the podcast comes from, which includes the figure of two characters deeply rooted in the collective imagination and that they themselves represent. Mariang, as the quinqui, and Carlos, as the pija, rescue two antagonistic characters to form a sensational tandem. A friendship relationship that emerged on the internet when they were 14 and 15 years old and continues today as a professional couple. Although before this project they had already worked together as scriptwriters for the RTVE program ‘Gen Playz’ after meeting in the capital.

Mariang was born in Cartagena and moved to Madrid to study Fine Arts in Design at the Complutense University. “I failed as a model numerous times, I don’t know how to sing, I don’t know how to act, so all I have left is this grace that I have been developing over many years of traumas,” she says. She is currently also a scriptwriter, along with Carlos, for the Europa FM radio show ‘Cuerpos Especiales’.

He recently spoke about Cartagena on the program ‘La Script’, hosted by the film journalist María Guerra. “Is your success because you are from Murcia?” Asked the presenter of the podcast. To which Mariang pointed out, laughing, that she was from Cartagena. The young woman acknowledged that part of her popularity may come from there: «I think so. Not successful as such, but there is a very large niche that I have nurtured from Cartagena ». And it is that in her social networks, mainly Twitter, she constantly brings up her hometown. «I always take Cartagena out. No matter what conversation it is, Cartagena comes out », she explained. So much so, that during Rosalía’s visit she spoke with her about FC Cartagena. In the interview she has also said that her Final Degree Project was a photobook focused on the municipality. “Oysters, what is Cartagena like, it is a land that sucks you in,” commented María Guerra, astonished.

Turned into a public figure, Mariang has been the target of criticism on Twitter on numerous occasions for her humor and the content of her tweets. In the program with Rosalía, she was reproached for saying that she had made an effort to remove her Cartagena accent. “I suppose that if the most cancelable thing I have done is make jokes about Cartagena being Cartagena, it is an indication that I can sleep peacefully at night,” she replied after the commotion over her words.

Mariang, the Cartagena that presents one of the most successful podcasts in Spain