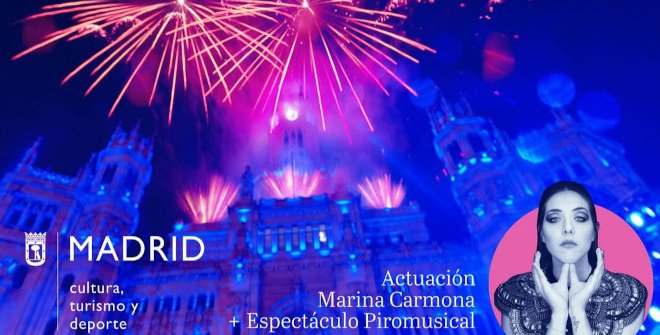 On October 12, Columbus Day is celebrated and the City Council, for the first time in history, participates in the programming of activities with a proposal that combines music and fireworks. Also, that same night, the singer Marina Carmona will perform his own songs and versions of songs composed by Antonio Carmona, leader of Ketama. It will be the night of October 12 in the Plaza de Cibeles starting at 9:00 p.m.

Milky Chance lands in Madrid as part of his European tour also on the 12th. The German folk group presents its new album ‘Synchronize’ at La Riviera starting at 9 pm. To create social awareness regarding climate change, “Milky Chance will allocate a percentage of its sales to the protection of the tropical forests of Peru, an initiative that the training has been promoting since 2019,” they explain from the Madrid Tourism area. Tickets are on sale for €36.50.

Singer Martirio and the Cadiz pianist Chano Rodríguez come together in a musical proposal that moves between jazz, flamenco, copla and Cuban music for the concert offered on October 12 in the Red Room of Teatros del Canal. It is a musical event framed within the new edition of the Villains of Jazz cycle and supposes, as highlighted in the Consistory, “one of the most fascinating alliances of current popular music”. The concert will begin at 8:30 p.m. and tickets are already on sale between 9 and 35 euros.

The international touch to the programming of October 12 comes from the prestigious mariachi band Mariachi Vargas from Teocalitlán. The group turns 125 and celebrates it in Madrid with a concert at the WiZink Center. With an extensive discography, the group is specialized in mariachi songs, rancheras, boleros, corridos, huapangos, son jarochos and Mexican waltzes. In addition, throughout his career he has accompanied and played with other authors such as Pedro Vargas, Libertad Lamarque, Álvaro Carrillo, Pedro Infante or Jorge Negrete. Tickets, on sale between 45 and 65 euros.