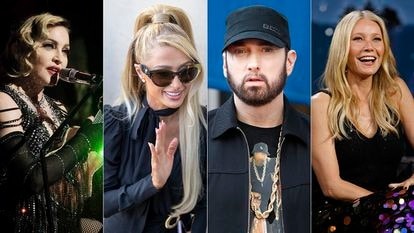 There are many questions that a journalist would want to ask Madonna. her opinion on the BAYC #3756 is not one of them. yes it was for Magazine Variety, who sat down with the singer last July and decided to ask her about this NFT. The non-fungeable tokens o NFTs are virtual images with an associated authenticity code. A JPG with a digital certificate that guarantees that the image in question is unique. These virtual drawings usually belong to collections with a common aesthetic and different variations, something like trading cards or Funkos, but in a digital version. And expensive, very expensive. The Bored Apes Yacht Club (Yacht club of the bored apes or BAYC, for its acronym in English) are one of the most popular collections of NFTs. They can cost hundreds of thousands of dollars. So much so that not even Madonna herself could buy the BAYC #3756as revealed Variety.

“I was very pissed off for not having managed to buy it,” replied the interpreter of Like a Virgin at the interview. “Once I have something in mind, I go for it. But I quickly learned that wanting 32 musicians on stage is not the same as wanting an illustration of an ape with a leather biker cap and multi-colored teeth,” she added. The conversation may sound absurd to those who are not familiar with this type of digital art. The truth is that it also sounds absurd to many experts on the subject.

For some time now, artists, athletes and celebrities in general have been showing off their NFTs. They talk about them in interviews, they put them as a profile picture on social networks, they even put them in their video clips. Snoop Dogg and Eminem have collaborated on a recent song. In the music video, the rappers give prominence to an animated version of their avatars from BAYC, something they also did when they performed live at the last installment of the MTV Awards. The reasons for doing so are not artistic but economic.

“The goal is to generate FOMO [siglas en inglés de fear of missing out, cuya traducción al español sería miedo a perderse algo] and incidentally raise the price of NFTs ”, explains Andrés Guadamuz, a researcher at the University of Sussex and an expert in this technology, by email. The price of NFTs is highly variable and depends a lot on how popular the image in question is. In this context, the fact that a celebrity shows his cartoon of a monkey on television (or laments that he has not been able to buy it) increases the value of that specific image and of the entire collection. He makes them known to the world, selling the idea that they are exclusive, rare and as famous as their owners. It’s not a video clip, it’s not an interview, it’s product placement.

At the end of 2021, the crypto asset market (which includes NFTs and cryptocurrencies like bitcoin) was reaching its boiling point. The gurus were already convinced, now they had to convince the mainstream. The challenge was to get common people on the bandwagon. That’s why actor Matt Damon started advertising cryptocurrencies. For this reason, dozens of celebrities began to talk about coins and digital art, casually slipping the idea in an interview, sharing the image on their social networks. The idea was to normalize its use, make it everyday, encourage its fans to invest.

Oscar-winning actress Gwyneth Paltrow changed her photo last January profile on the social network Twitter to put on that of a blonde and blue-eyed monkey. She thus entered the universe BYAC. A month later he exchanged it for an NFT from the collection FlowerGirls. And 30 days later for another from the collection WoWGalaxy. Jason Derulo is more consistent. And more insistent. The singer has not only changed his profile picture to put one of the famous collection CryptoPunks, but instead gives talks on how to invest in this world on the Discord platform. Other musicians like John Legend, Steve Aoki or the band Kings of Leon have decided to release their own collection of NFTs.

Everyone advertises, but the one who did it in the most shameful and embarrassing way was Jimmy Fallon, last January, when he interviewed the businesswoman and singer Paris Hilton on his show The Tonight Show. Both started the interview showing the camera their BAYC. Or rather, a printed copy of them (an idea that already destroyed the meaning of NFTs, which are supposed to be unique and impossible to replicate). The two commented in front of the camera, very proud, the peculiarities of their monetes. “I love the red heart glasses yours is wearing,” Hilton said. “Look at them together, I think they would be friends. They are colleagues,” Fallon replied. The canned laughs — and few by American standards — helped cushion the embarrassment of the moment, but they didn’t prevent criticism the next day. “Why were these celebrities talking about crypto in a late night shows?” he wondered the specialized magazine polygonal.

“The answer is money”, picks up the Guadamuz glove. “There are a number of venture capital funds that have been investing heavily in NFTs,” he notes. Of all these funds, it is worth focusing on one: Horowitz. This Silicon Valley fund played a leading role in the early days of the internet. And now he’s the biggest investor in the world crypto. The company has also sunk its roots in Hollywood, where it has found a lot of clients willing to invest.

“Horowitz has connections with several Hollywood talent agencies and they have apparently been buying the NFTs for clients as part of their promotional packages,” Guadamuz notes. Yuga Labs [empresa creadora de los BAYC] they are among those who have received the most money from these funds,” he adds. That would explain why Justin Bieber, Jimmy Fallon, Snoop Dogg, Eminem, Gwyneth Paltrow, Madonna, Neymar, Paris Hilton, Timbaland, Ellen DeGeneres, or Steve Aoki have an NFT of a monkey. And why don’t they stop talking about him?

Madonna, Gwyneth Paltrow or Eminem. Why do all celebrities have an NFT and why can’t they stop talking about it?