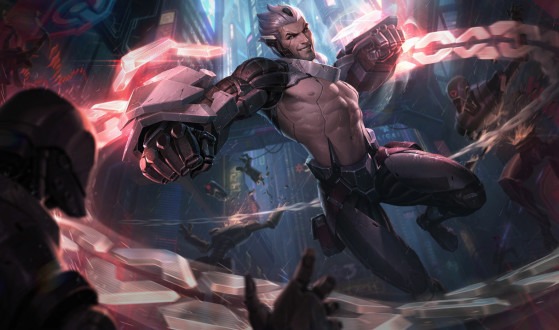 The Iron Revenant was one of the first characters to receive a complete kit overhaul. Even if some of his spells have retained traces of the original skill (this is particularly the case with his Obliteration (A) and Indestructible (W)), their functioning is still different. However, what struck Mordekaiser hands the most is the change to the R, which now drags the opponent into the Kingdom of the Dead for a merciless fight, without witnesses, without hindrances. In this realm, Mordekaiser reigns supreme. Well, until a smart guy decides to crash the party.

The crazier we are…

What is happening here is actually quite simple. The Sylas stole Mordekaiser’s ultimate, and both champions use it simultaneously on different targets. The Iron Revenant targets the opposing team’s Nunu, while Sylas prefers to try and kill the Senna. Only the four characters find themselves together in the arena thus created, transforming the duels into 2v2 worthy of Super Smash Bros. Ultimate. If this interaction is unexpected, it raises other questions.

Morde’s ultimate lasts 7 seconds, and that’s how long players take to kill the Nunu, the only victim of this action. What would have happened if Nunu had died earlier? Normally when Mordekaiser kills his opponent, he instantly returns to the normal dimension. Would he have stayed here to help Senna, or would he have been teleported anyway, leaving his mate alone with Sylas? Or would Senna and Sylas have been ejected with him, the Realm of the Dead having obtained his tribute? Since Sylas hadn’t been released at the time of the rework, it’s certain this interaction wasn’t originally planned, even though it had to be thought about during the development of Unleashed Revolutionary.

Besides an unexpected interaction, this action also gives some interesting information about how the game works. Note here that we will only talk about gameplay and not lore, since technically Sylas and Mordekaiser never crossed paths in history , and that we therefore do not know if the Revolutionary could actually fit into the dimension of the Revenant. This therefore tells us that there is only one Realm of the Dead for the game, otherwise two different arenas would have been created: one for Sylas and Senna, and one for Mordekaiser and Nunu.

It is therefore possible to interact directly with this dimension, at least for certain characters (here Sylas who is embedded). Today when a member of your team is caught, it is no longer possible to help him (and conversely, Mordekaiser’s team cannot help him either). A future champion could therefore have a skill or a passive, allowing his spells to act on all dimensions and not just Runeterra. Although this is probably not a priority at the moment, given that this mechanic is marginal, it is information that is interesting to note in the back of your head, if other skills of this genre were to see the light of day (such as a spell that makes a character pass into another dimension for X seconds, to allow him to move around without being seen/hindered by opponents).

Adam “LIDER” Ilyasov is a well-known personality in the European League of Legends scene, especially in France. Fans have had the opportunity to observe him in the LEC and the LFL, but for several months he has been inactive, stuck on the bench of Team Vitality. But the hour of release seems to have arrived!

LoL: Mordekaiser is no longer the sole ruler of the Shadow Realm!