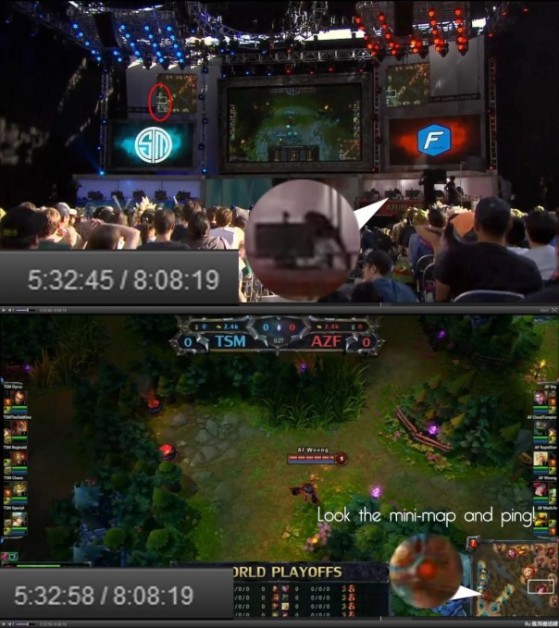 If balancing a game like League of Legends isn’t easy, managing an entire competitive system in the world is even less so. Riot Games has stumbled many times with the community due to difficult decisions the publisher had to make regarding matches or team/player attitude. This MSI’s ping related incidents aren’t the worst times competitive LoL has had to go through, when you look at some past scandals.

Svenskeren and his nickname

In 2014, SK Gaming validates its ticket for the worlds. On his training account, their jungler Svenskeren decides to name himself Taipei Ching Chong. The purpose of this maneuver was to make fun of Asian languages, which the local community took very badly (rightly). Riot Games reacted by banning the player for the first three games, which will cost the competition SK forced to play with a substitute. The sanction may seem light today, but several factors explain it. Even though 2014 isn’t far off, the community was less sensitive to anti-Asian racism, which may partly explain such a lenient punishment. But for us, it was just an event that caught Riot Games off guard. Banning a player just before the start of the competition is killing part of the interest of it by greatly weakening a team, and the publisher had to find a compromise between a fair punishment, but which does not have repercussions not too much about the competition of which the other actors and organizers were innocent. Similar behavior today would result in a much heavier penalty.

Azubu Frost is watching you!

The second scandal dates back to season 2. During the group stages of the World Cup, several teams are accused of looking at giant screens behind them, in order to obtain information they are not supposed to have, such as the position of opposing players. Several formations are warned, and the guilt of one of them, Azubu Frost, will be proven. The team will receive a fine (light today but not so anecdotal at the time) for this behavior. Still, it’s hard to totally blame the players. The screens were easily visible to them, and the Season 2 World Championships were marred by technical issues resulting in very, very long breaks (several hours). It is understandable that some players gave in to temptation given the stakes and the circumstances. Riot Games is now making sure that players cannot see giant screens, in order to avoid these kinds of incidents.

Break at my hand…

This scandal took place in LVP and did not make much noise in France. During a match against S2V, the players of the Giants Gaming team took advantage of a lag-related break, to stretch their legs and leave the stage, while their opponents remained seated. The Giants ended up winning the game, which was decisive for their qualification. Although it has never been shown that the team took advantage of these moments to do something prohibited by Riot Games, such as sharing information with each other, Spanish fans judged their attitude to be disrespectful at best. , and did not appreciate the incident at all.

Linak, the player who paid for the others

The jungler of the aAa Worlds finalist team in Season 1 was not a saint, quite the contrary. He had an easy tilt, and wouldn’t hesitate to run down SoloQ games if things didn’t go his way in the game, to the point of having a reputation as an extremely toxic person. Even if he was far from being the only pro in this case at the time (we are really talking about a significant part of the pool of Western pros at the time), Linak had the reputation of being the worst ‘between them. As Season 3 and the creation of the LCS approach, Riot Games announces that it wants to toughen its Summoner’s Code, that professional players will now have to have an irreproachable attitude during and outside of competitions.

Linak changes his behavior, and manages to qualify with aAa for the LCS. A few weeks before the start of the competition, a sanction from Riot Games falls: Linak is banned from all official competition, for a period of one year. Only this sanction is based on facts prior to the change of policy of Riot Games, and will severely penalize the French structure, which had to find a new jungler at short notice. Riot Games needed an example for their new policy, and Linak paid for his past behavior. If the sanction is not necessarily unfair on the merits, the form has left a bitter taste in the mouths of French fans, for the only structure in France to have qualified directly for the LCS.

As the end of the 2014 NA LCS Summer Split approaches, the CLG already qualified for the playoffs, decide to send their professional team to South Korea for bootcamp, and to play the last matches without stakes with substitutes. If this was not prohibited by the rules, this attitude did not please Riot Games, who refused to provide accounts to players so that they could train in South Korea (a security number is required social to create an account on the Korean server). The latter were therefore forced to share accounts with other players, and Riot Games sanctioned them for this with a fine of $ 1250 for the four players concerned, and a symbolic banishment from the OGN for 2 years (since none of the players was going to play in the Korean championship, and that international competitions are organized by Riot Games, this sanction has no real interest).

In this story we feel that Riot Games wanted to make CLG pay indirectly for wanting to play the smartest, by showing them that this little game can be played with two people. The sanction did not go over very well from the point of view of the American community, which believes that CLG should not be sanctioned, even indirectly, for having cleverly exploited a poorly written point in the rules. Especially since karma took care of catching up with them, because the team didn’t win any playoff games.

RNG, MSI, a story that repeats itself

Let’s take a quick look back at last year’s MSI scandal, which already involved RNG. Thanks to their first place in the group stage, the Damwon had to play the MAD Lions first, in order to have an extra day of preparation for the final. Only Riot Games changed the order of the matches at the last moment, citing logistical problems related to COVID-19 (the Chinese had to do a specific test 48 hours before their possible flight for the final, and no other flight could be found, which forced Riot Games to advance their match). This deeply displeased the community, because this extra day of preparation can be a decisive asset. This decision has also been condemned by the Korean branch of the publisher, which believes that Damwon has lost an advantage that they had obtained legitimately.

The latest scandal is very recent, and took place this season in the VCS B, the second Vietnamese division. Genius Esports team finishes third in their groupwhich prevents him from reaching the playoffs. The GARENA, the tournament organizer, then banishes the DNS Gaming team, second in the group, allowing the Geniuses to continue the competition. The first statements and previous cases, cast doubt in the community, which initially accused GARENA of favoring a team. After publication of more conclusive evidence, it seems that GARENA has taken a logical and legitimate decision, according to the regulations in force.

Ryze is not only the worst champion and a big problem for Riot Games. If we take a closer look at his situation, we realize that no character in the history of League of Legends has ever been so bad.

LoL: 7 scandals around the competition on League of Legends