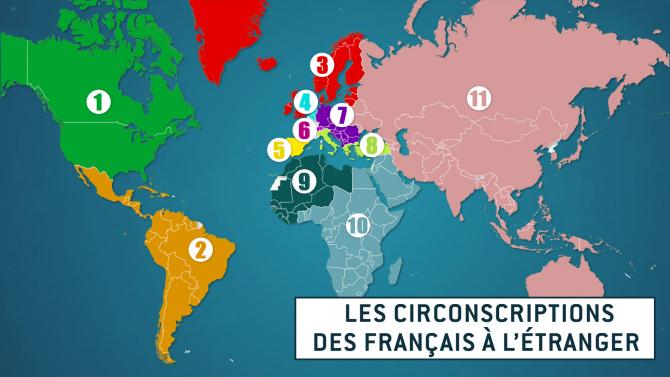 How many voters live outside France?

According to INSEE (National Institute of Statistics and Economic Studies), of the 48.7 million registered voters, 1.4 million live outside France.

Until 2012, French people living abroad were only represented in the Senate, the upper house of Parliament. The election of deputies of French people residing outside France was created in 2008 on the occasion of a reform of the constitution. Their first election took place four years later.

French people living abroad will again be represented by eleven deputies (out of the 577 in the National Assembly) representing the eleven constituencies.foreign“.

In terms of the number of registered members, the most important of these constituencies is the 1st. It has 231,328 registrants in just two countries, Canada and the United States. The one with the fewest voters (89,012) is the 2nd which is spread over 33 countries in Central America, South America and the Caribbean.

Two constituencies concern the African continent, the 9th and the 10th.
The 9th includes the Maghreb and a large part of West Africa, with the exception of Benin, Ghana, Togo and Nigeria. These last four states are on the tenth constituency with the rest of Africa and the Middle East.

The 3rd constituency represents Northern Europe. The 4th, small in size but important in terms of the number of voters covers the Benelux (Belgium, Netherlands, Luxembourg).
The 5th is that of the Iberian Peninsula, Andorra and Monaco.
Switzerland and Liechtenstein represent the 6th constituency.
Central Europe and the Balkans are on the 7th.
The 8th is that of the European countries of the Mediterranean to which are added Israel, the Palestinian Territories and Turkey.
The 11th, finally, is a juggernaut grouping together 49 countries ranging from Eastern Europe to Oceania via a large part of Asia.

Voters living abroad will vote earlier than those in metropolitan France and overseas.
► Given the time difference, the 1st constituency stands out. The first round of legislative elections will take place there on June 4, 2022 and the second on June 18. In the rest of the constituencies abroad, the first round is scheduled for June 5 and the second on June 18.
► By internet, everyone is housed in the same boat: first round on May 27 until June 1 at 10 a.m. GMT. The second round of electronic voting will take place from June 10 to 15 at 10 a.m. UT.
► For postal voting, the 1st constituency regains its small hourly specificity. Regarding the first round, the mail containing the ballot must reach the consular post on June 2 at 6 p.m. local time at the latest and, for the second round, on June 16 at 6 p.m. local time. One day later in both cases for the other constituencies.

To which address should you send your newsletter? Don’t panic, you will receive your electoral material at home with an envelope mentioning the address. On the other hand, you will have to free it! Also take into account the quality of the postal services of the country in which you live!

Voting will take place in French consulates and embassies around the world. If you have any doubts about your polling station, here is a useful link for “inquire about your electoral situation“.

Who are the candidates?

NUPES for New Popular, Ecological and Social Union. It includes in particular La France insoumise, the Greens, the Communist Party, Generation.S and the Socialist Party.
Whole is an alliance around the Republic on the march of Emmanuel Macron (outgoing majority).
reconquest is the party formed around Éric Zemmour, far-right presidential candidate.

The parties must respect the period for submitting candidacies: it opened on May 16 and closed on Friday May 20 for an official campaign start on May 30.
Next to the name of the outgoing deputy, the political label under which he was elected five years ago.

Legislative in France: elections of deputies from abroad, instructions