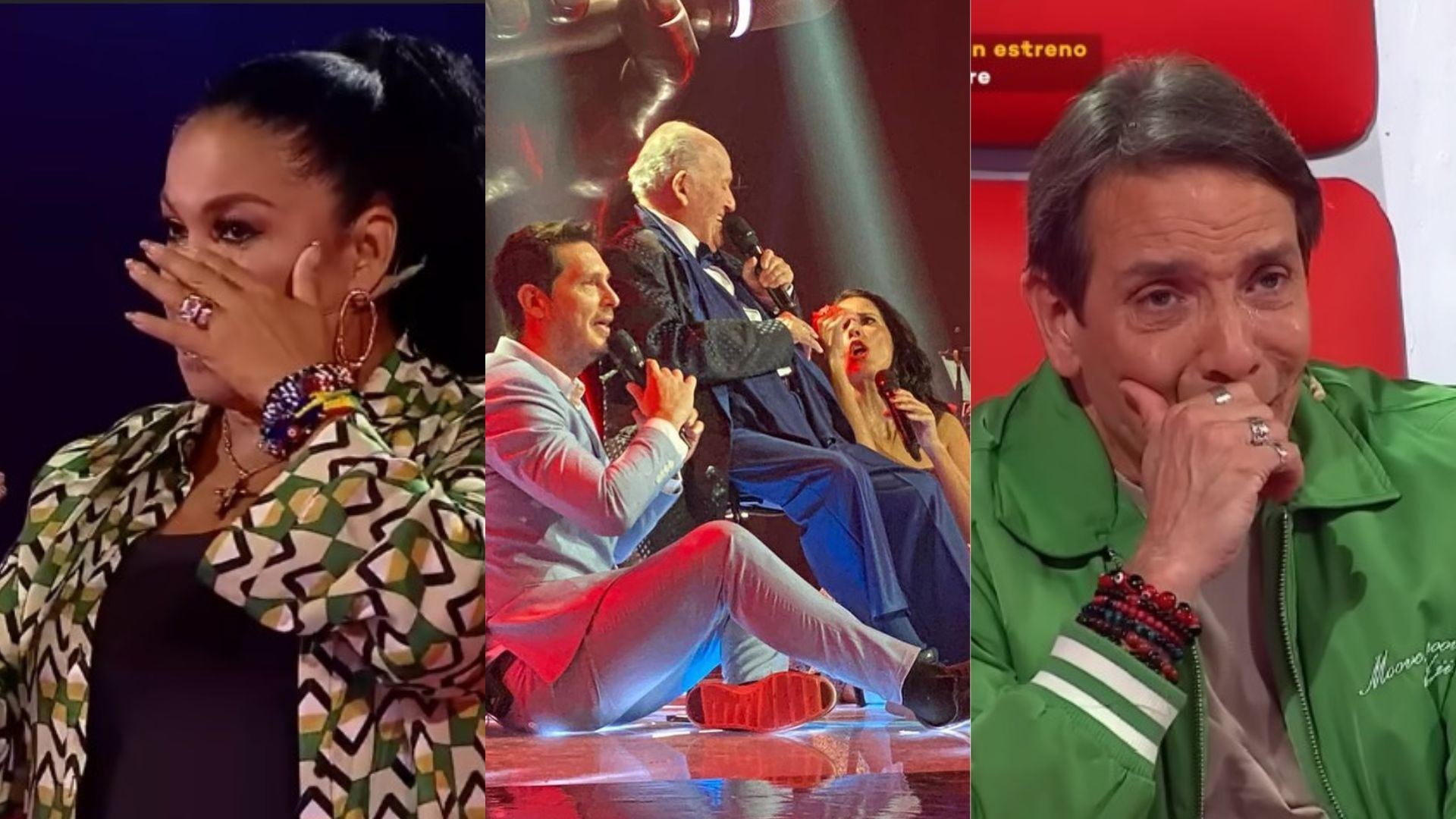 The stories of the contestants of the second season of ‘The Senior Voice‘ continue to move their audience and the more the contest progresses, a little more is known about each of the elderly men and women who dared to give the dream of being a singer a new chance.

The oldest of all the participants ‘The Senior Voice His name is Otoniel Darío, he is 96 years old and this week he won the hearts of both the jury, hosts and viewers of the singing format on Latina Television.

And it is that Don Otoniel softened Daniela Darcourt, Eva Ayllón, René Farrait and Raúl Romerowho they were surprised by the vitality, spark and spontaneity that the contestant who comes from La Punta has.

Drivers and sentimental partner Gianella Neyra and Christian Rivero They were delighted with the talkativeness of the contestant who very chivalrously praised the beauty of the actress. “I am delighted to be with you, just in case Cristian I have said that she is almost as beautiful as my wife”was one of the phrases he said.

Due to some wounds on his feet due to surgery, Don Otoniel sang sitting in a chair. He performed the tango ‘Nostalgia’, but his condition did not prevent him from captivating the entire audience with his melodious voice. 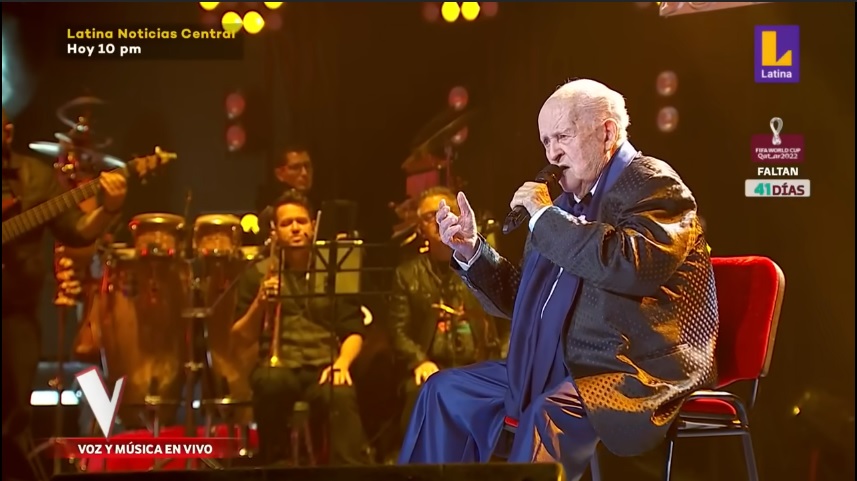 Otoniel Darío sang at the concerts of ‘La Voz Senior’.

After he finished singing, Gianella came over and was the first to congratulate him. The trainers stood up to applaud the gentleman’s performance. “He did not forget the lyrics and it has moved us all”, mentioned the actress.

On your side, Christian also approached and to make the participant feel more confident, the couple first bent down on their knees, but then sat on the floor. One from each side of the contestant.

Rene Farrait He mentioned that it was a pleasure to listen to him, he approached to hug him and congratulate him. At that time Don Otoniel told him that he had a great quality of person. 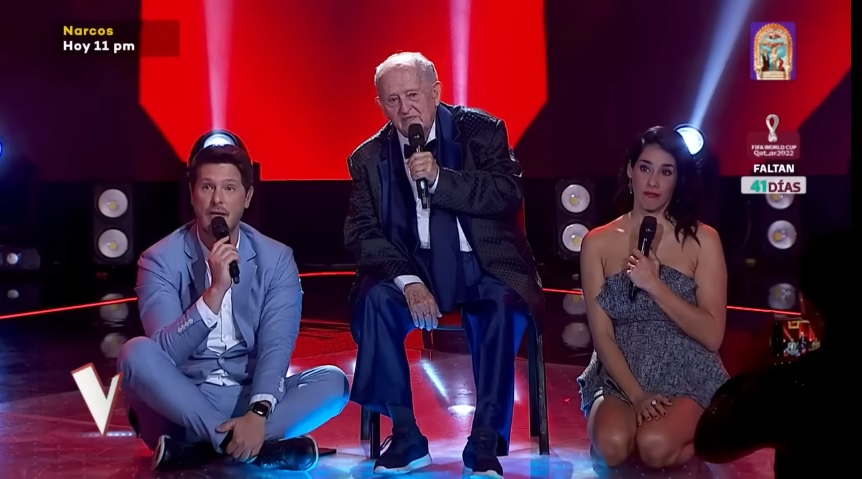 In addition, he told how he met his wife, who died at the age of 85 and gave him seven children. She went on to talk about how she had met Cristian a few years ago at a relative’s marriage. And as much as they asked him that it was time to listen to the coaches, Don Otoniel kept telling his stories and even asked the public for applause to Raul Romero.

“You are a person who carries his age with a joy, joviality. You have sung a really difficult tango, for me it has been a magical moment, you have not forgotten the lyrics, you have been to the rhythm, artistically impeccable, I congratulate you”, pointed out the rock singer.

Finally, his coach Daniela commented that she would like the men of today to speak like Don Otoniel. “Out of his talent and his history in music. I applaud giving us this dose of love for us, especially for young people, to cultivate that beautiful, pleasant, lasting love that transcends a social networkl, and that life is more beautiful when there is love, “he explained.

When choosing who goes to the next stage of the contest, the salsa singer chose Don Otoniel Dario and Don Rernán Eduardo.

So moved was Otoniel’s participation in Christian Riverothat He was encouraged to share some photos on his Instagram account of what he experienced on Tuesday, October 11, in the program of ‘The Senior Voice’.

“Masters in kindness and generosity… What an incredible version of ‘La Voz Senior'”, was what the animator wrote in his post.

The trainer Eva Ayllon was moved by the song ‘she’s asleep‘ which the contestant sang and performed Raul April. The Creole music singer confessed that the subject took her back to her memories when she received the news of her mother’s death.

“This song has brought me to a May 19 about two years ago, when I received the news of the death of my mother, I saw her with her shroud, asleep. Thank you for bringing it back to my mind, in spite of everything, thank you”, detailed the national artist and then received the warm hug of her companions.

‘La Voz Senior’: Eva Ayllón is moved by the performance of a contestant. LatinTV.

Due to the extraordinary talent and voice that he showed that night, Don Raúl went on to the next phase of the contest. But before that, his coach Raul Romero He had great words of praise for his work.

“For me his performance was perfect. It’s her kind of song, you put a force on it, your voice, impeccable acting. It has been one of those magical moments, I enjoy and I feel privileged. I have felt super connected, I know you are a leader, but when you sing strong songs like that I have felt a lot of sensitivity, ”she explained.

René Farrait is moved by the love story of a participant in ‘La Voz Senior’. LatinTV.

The former member of ‘Slight’ burst into tears after hearing how the participant Yolanda Carbajal She dedicated tender words to her husband, who was in the audience. In addition to that he also dedicated a speech full of love to her.

Rene Farrait He confessed that he was very excited to hear such a sincere love story, he also pointed out that it is very difficult to find such a pure and honest love.

René Farrait is moved by the love story of a participant in ‘La Voz Senior’.

This after Doña Yolanada singing ‘The day you Love Me’ and of course she dedicated it to her husband Juan who is 20 years older than her and suffers from Alzheimer’s. “I am pleasing the love of my loves”said the contestant.

Doña Yolanda said that it was her life partner who encouraged her to send her casting. She explained that she sings a song to her husband every day. Cristian asked this lucky man for a few words and he thanked God for having sent him a good, affectionate and beautiful woman.

“My love, I love you very much, you don’t know how much, I miss you when I’m alone because I don’t feel your hands caressing my face. Thank you sir for giving me this woman as a beautiful and precious wife,” the couple said.

These words moved Eva Ayllón, Daniela Darcourt, Raul Romero but especially the Puerto Rican singer. Romero asked the contestant if she argued with her husband and she told him no, only at the beginning. “It is that there has to be a lot of conversation, they are two worlds that come together to form a new one”, he advised.

Daniela stressed that the love between Yolanda Carbajal and her husband Juan, pointed out that she is an example for all young people who no longer want to have a pure love.

“I share what Rene says, it is more difficult for artists. Our sentimental life becomes a kind of casting to know who really suits us. I thank you Yolita for giving us this beautiful message and this beautiful love story that I hope will serve many young people and continue admiring that man and woman next to them, ”she pointed out.

‘La Voz Senior’: Contestant pays tribute to his deceased mother with his participation in a singing program

‘La Voz Senior’: Participant broke down by forgetting the lyrics of the song in a blind audition
Participant of ‘La Voz Senior’ arrived accompanied by his 88-year-old mother: “He came to see his little son”

‘La Voz Senior’: The most emotional moments left by the participants in the week’s concerts