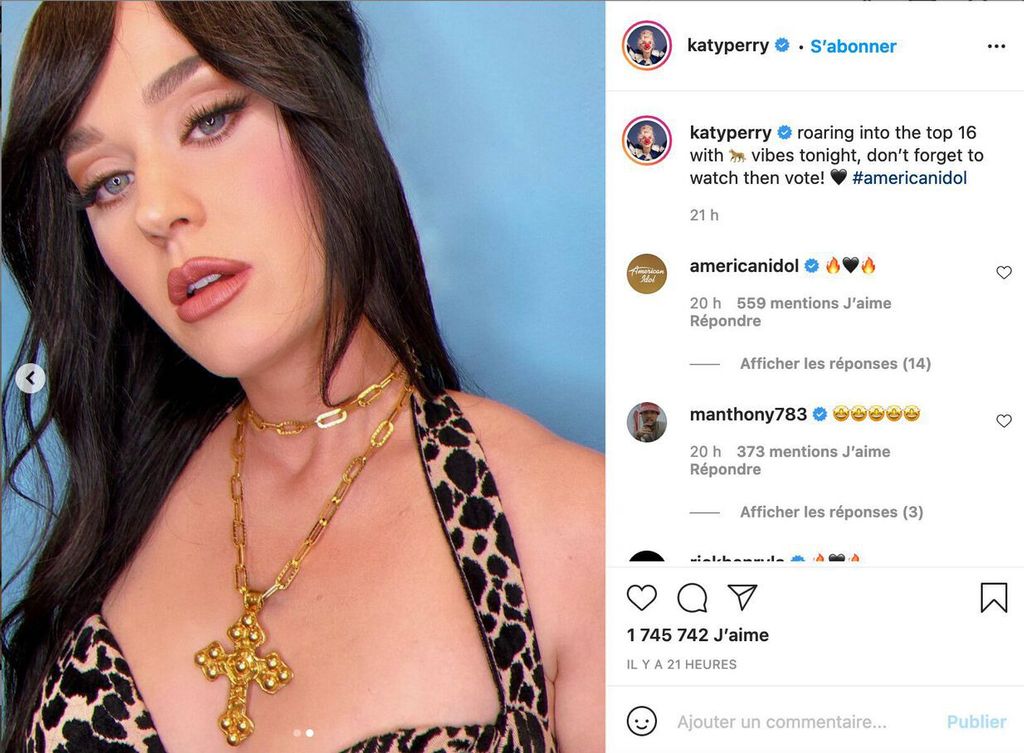 Katy Perry posted her new hairstyle on her Instagram account this Sunday, April 10. A publication that greatly inspired Orlando Bloom.

A very entertaining post. Katy Perry is an artist who, since the beginning of her career, has been very transparent with her subscribers. She does not hesitate to share her daily life on her social networks and very often confides with an open heart. She has been starring on American Idol for several weeks and posts her looks on his Instagram account every week. This Sunday, April 11, she wanted to reveal a new haircut. In the photos of the singer, we could therefore see her with long, black hair. Regarding her clothes, she was dressed in a leopard dress and a necklace in the shape of a golden cross. “I opted for a leopard look tonight; Don’t forget to watch and vote. #americanidol”, she wrote in the caption. A publication that greatly inspired Orlando Bloom since the actor did not hesitate to leave a short comment. “Baby, we’re craving oat milk,” he indicated. His message did not go unnoticed by Internet users, many of whom thanked him for this touch of humor. It would therefore seem that the couple wishes to share their happiness very openly.

Katy Perry is an artist who made the choice to be honest with her fans. The singer does not hesitate to be very transparent, even when it did not put her to her advantage. On April 4, on the set of American Idol, the jury made a small revelation about her new life as a mom. Blown away by contestant Cassandra Coleman’s performance, she said, “As a new mother, I don’t have much time, so I stopped shaving my legs. But when you sang, the hair on my legs grew an inch and a half.” A little anecdote that did not escape his comrades. “I’m telling you, Luke was checking to make sure you were telling the truth while you were talking.“, said Ryan Seacrest. Very amused by this revelation, she wanted to confirm her statements on her Twitter account by sharing a gif on which we can see hair growing on the legs in a few seconds. “A real live look at the hair on my legs as I hear Cassandra Coleman sing.” she wrote to illustrate. The sequence made Internet users laugh a lot, who appreciated the honesty of the American star.

It seems that Katy Perry and Orlando Bloom have decided to be the kind of couple who do not hesitate to confide in their private life. Indeed, on March 20, the actor gave an interview to The Guardian. During this one, he had revealed that he had “not often enough“of sexual intercourse with the mother of his daughter. Would it be a subliminal message to Katy Perry or a simple joke to make people react? He wanted to specify the reason by saying: “We just had a baby so“, he added. Katy Perry gave birth to Daisy Dove in August 2020 and the couple seem happier than ever since.

Katy Perry
She did not hesitate to post a video with a filter.

Katy Perry
His publication made Orlando Bloom laugh a lot.

Katy Perry
He didn’t hesitate to post a joke in the comments.

Katy Perry
Both are transparent with their subscribers.

Katy Perry
They chain the confidences.

Katy Perry
They are very close on social networks.

Katy Perry: Orlando Bloom’s hilarious reaction to her post about her new hairstyle