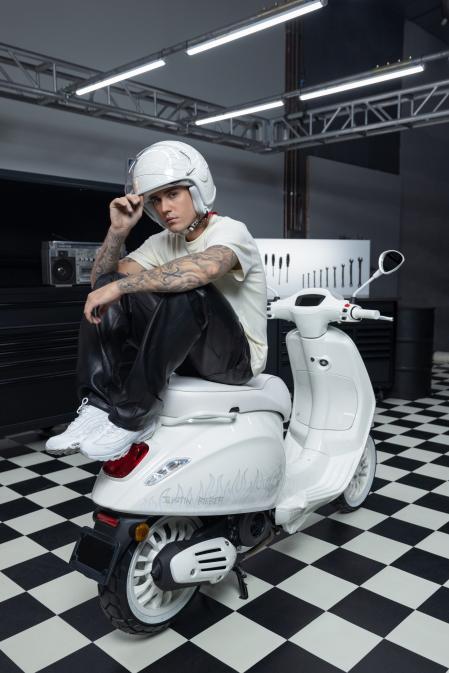 Each of the two actors involved in this story, in their own way, is a true world leader in their respective fields. Justin Bieber is one of the current main stars of the music scene, a singer who excites millions of fans spread over all corners of our planet. Vespa, for its part, is considered one of the most internationally recognized motorcycle brands, thanks to its long history, which has accumulated a multitude of unusual episodes since 1946. From the collaborative project stamped by both parties, the original Justin scooter was born. Bieber X Vespa.

To be honest, most motorcycle designers should recognize that the challenge of signing the image of a special series of Vespa was not easy, due to the complexity involved in putting distinctive stamps on a historical icon on wheels. It was even more difficult to suspect that the famous Canadian singer would be able to capture such a surprising aspect of the charismatic Italian scooter, destined to arouse the interest of a legion of fans of his musical themes.

The result of this unprecedented project is a vehicle that aims to celebrate the spirit of freedom of movement and the passion for contemporary design. An intense combination of creativity and freshness, it exudes high doses of the pop culture that characterizes both the artist and the motorcycle brand itself. Bieber accepted a complex challenge, since Vespa has always served as a source of inspiration for stylists and designers around the world. The Canadian singer has had to surf the illustrious collaborations of recent years, signed by such relevant specialists as Giorgio Armani, Christian Dior and Sean Wotherspoon.

The complicity between the Canadian artist and the Italian firm is known by all the fans who follow his career in detail. Bieber himself explains that “the first time I rode a Vespa I was somewhere in Europe, probably London or Paris. I remember seeing one pass by on the street, and I told myself I wanted to try it. I had a great time, feeling the wind caressing my hair. I was invaded by a very funny feeling of freedom”.

Through 75 years, the Vespa has undergone a constant process of improvement to maintain its youthful spirit.

The surprising Vespa signed by Justin Bieber will stand out from the rest of the range at first glance due to its unmistakable monochrome. The singer has selected the white color to impregnate all the elements of the vehicle. The truth is that we are facing a scooter that will not leave anyone indifferent, a special version that stands out for even mounting a white saddle, grips and suggestive spokes of the rims. For things like the brand logo and decorative flames, another off-white hue has also been used, creating an interesting visual contrast.

Despite being a limited special edition model, the Justin Bieber X Vespa is designed to satisfy the concerns of any fan who wants to ride a scooter. Consequently, those responsible for the Italian brand have chosen to offer this unusual decoration in three engines (50, 125 and 150 cc). In its launch phase, online reservations are accepted, although very soon it will also be available on the sales network.

Die-hard fans can get their wishes fulfilled with a bag, gloves and a white helmet decorated with flames

The most unconditional fans of the singer will be able to fulfill their wishes by also buying a collection of accessories designed to match the scooter. A bag, signature gloves and a white helmet decorated with flames complete the collaboration. Bieber acknowledges that “I love Vespa, and being associated with such a classic brand is great. Being able to express myself, whether through art, music, visual effects or aesthetics, being able to create something out of nothing, is part of me. Ultimately, the goal of creation and design is always to put a unique spin on things.”

But if the scooter designed by Justin Bieber can be considered a cult object before its launch, it is due in large part to the emblematic historical trajectory accumulated by Vespa. Born in 1946 under the visionary conception of Corradino D’Ascanio, an aeronautical engineer, she allied herself with the Fiat 500 to put Italy on wheels. Its name arose from the first impression that Enrico Piaggio had, at that time the owner of a struggling Italian motorcycle company, who, seeing the prototype, exclaimed that it looked like a wasp.

Throughout its seven and a half decades of life, the Vespa has undergone a constant process of evolution, in order to keep the youthful spirit of the original model in top form. Present in almost every country in the world, it has recently surpassed the sales milestone of 19 million units. This season, it is the turn of the original Justin Bieber X Vespa version to embody the creative impulse of such a legendary vehicle.