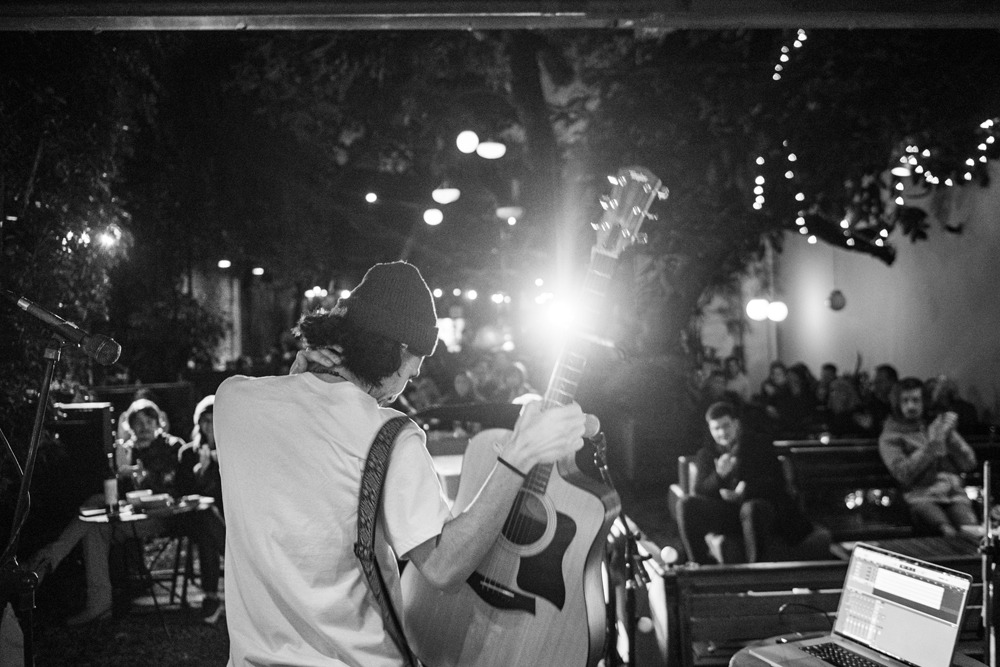 His particular style and pregnancy, the message of his songs, and the concept on stage provide Jose Soubiron a contrastable profile within the world of music. He is a multi-instrumentalist, producer and composer, he is inscribed in folk, but he lets himself be carried away by what he wants to communicate and allows himself to transgress the barriers of the genre.

In his incipient musical career, he has released two albums and several singles, mostly only instrumentalized by him.

After his tour of the Argentine coast and various Uruguayan locations, he prepares a new release and packs his bags to cross the border once again, this time to Mexico.

José Soubirón is a musician by training, but, above all, by experience and travel. In dialogue with Democracia, he spoke about his beginnings in Junín, his itinerant career, new horizons, and the future at a professional level.

“Music was always part of my life,” said José, who was raised in a home where this branch of art was never lacking. Indeed, his mother is a musician and, therefore, he has always been close to that discipline, although he warned that it is not “a virtuoso who has been playing the guitar since he was 5 years old”.

It is that his first palpable approach to music was as a result of his bass classes at the age of 12, which he now remembers and recognizes that the choice of the instrument was, to a certain extent, an “act of rebellion”. “I didn’t want to play the guitar because it was too common,” he recalled, laughing. Currently, that is precisely his main instrument, and he accompanies him at every moment of his life.

“Then I followed the self-taught path”, explained José, who considers that “music has a lot of personal learning”, but also remembers the role of his mother in his beginnings. “My mom taught me a lot of guitar, especially technique”, he added.

It should be noted that his interest in the instrument became palpable when he discovered that he could write his songs. During adolescence, he played in “Sintonía”, a band with friends, which, when its members reached the age of majority, dissolved.

“I felt the need to make music, I realized that I really loved him”, express.

Born in Córdoba, raised in Junín and educated in Rosario; From a very young age, José has been accustomed to emigrating. When he was only 6 months old, he moved from Río Cuarto to Junín, where he lived for a large part of his life, until he decided to move with his family to Rosario, to continue his studies related to music and be close to his relatives. “I wanted to train musically and start my artistic career,” said the musician, who lived in the city of Santa Fe in subsequent years.

He also stressed that it was there where he had his “more formal and academic education”, which allowed him to learn to handle more instruments. “In Rosario I began to find my style”he affirmed, and highlighted that “he has another opening and other musical opportunities”, which fit with his professional proposal, and the objectives pursued.

In this sense, he recalled that he did not find in Junín possibilities to show his artistic side. To a certain extent, he was singled out for “having longer hair, wearing other types of pants and making music”, which, without a doubt, was counterproductive. “When I arrived in Rosario I shared with musicians and had many influences, I fell in love with the city”, he added.

But life allowed him to travel more miles. “The beach always caught my attention”he stressed, regarding his current whereabouts.

José lives in Chapadmalal, south of Mar del Plata, and attributes his devotion to coastal cities to his musical idols, such as Jack Johnson and the Red Hot Chili Peppers. “I thought all of that was super far away, I didn’t think he could do it,” he said, and stated that “Chapadmalal is a paradise, with beaches, waves and a lot of cultural life.”

Currently, José surfs and is dedicated to his artistic career, which takes him on trips to different parts of the country. To a certain extent, he has fulfilled the dream of many, by doing what he likes on the road. “It’s my life story, traveling makes me very happy,” he said, and expressed that he seeks “a balance between the sea and the Federal Capital,” the places he frequents the most.

The folk: start over

“The encounter with folk was quite particular”, explained the musician. The truth is that the choice of the genre was not fortuitous, but neither was it early, and José stressed that both the encounter with other musicians and the live shows brought him closer to that style, in which his discography is inscribed.

However, prior to his full discovery as an artist, he had already taken an important step in his career, releasing his first solo album at just 21 years old. In fact, he published his first album when he was 17 years old, together with his friend Nicolás Agesta, with the money he had earmarked for his end-of-year trip to Bariloche.

As he explained, his first solo album “had overtones of folk but was more pop and funk” and required “very intense work for more than 2 years.” The album in question was titled “Release”, and precisely the author of it got rid of it shortly after publishing it. “I hid my first album,” explained José, who acknowledged that it was far from the style he was looking for, and that he reproduced it in live performances.

In this sense, the artist remembers it as “an internal struggle”, fundamentally based on the “lack of identification” with his product, and that led him to delete that first album from his platforms.

“I released the album and I felt that something was missing”, José detailed that, unlike what is customary in the world of music, after the publication he did not perform shows, but he retracted “indoors” to resolve his shortcoming. “I locked myself up to study and study myself, I wanted to find what I was missing,” he explained.

This is how, after a long road, he found his new style and identity in folk, which finally completed him. “I felt that I didn’t lack anything else musically”, he emphasized, and that turning point in his career was the new beginning that he expected. “It was starting from scratch, and finding myself in a particular musical and artistic concept,” he added. The new account after the blur came with his single “Light”.

However, the musician still remembers “Soltar” and does not rule out, in the long term, publishing it again. In particular, he highlighted two collaborations that the album contained, with the artists Silvina Moreno and Nicolás Agesta.

“I am very happy with everything that is happening,” said the musician, referring to his presentations and shows. Likewise, he highlighted the continuous work behind each date, particularly since he himself manages all aspects, such as dissemination, call, sound, production and rehearsals. “I like to be on the move all the time, but sometimes it overwhelms me,” admitted.

On the other hand, the musician was also satisfied with the possibility of making known not only his music, but also his “concept, message, musical proposal and staging”, and therefore attaches great importance to his live performances, in numerous locations.

As for his shows, weeks ago he performed in Palermo, tonight he will do it in Rosario, and next week again in the Capital. “I’m getting to very nice places”, he claimed.

In turn, beyond his presentations on the Atlantic Coast, last summer he also found him at the other end of the Río de la Plata, on a tour that had more than 20 shows in different Uruguayan cities, including Montevideo, Punta del Este, La Paloma, Punta del Diablo and José Ignacio.

Is that after the release of his single “Where are you” undertook the homonymous tour and was encouraged to the unknown. As he explained, on the Argentine coast “he had already played a lot and met many people”, and that was what motivated him to a new experience. “He wanted something else, he wanted to go to Uruguay,” said the musician who, weeks before arriving in the neighboring country, was in charge of organizing the trip and the dates.

In this regard, José explained that it was not in his plans to stay for more than a week, but the warmth of the Orientals and the opportunities that arose kept him traveling and performing for more than a month. “I would play and another show would immediately come out,” he stressed, and stated that “The experience in Uruguay was incredible.”

In parallel, José recalled the importance of dedicating himself to music on a daily basis, and explained that, beyond the shows and weekly presentations, he also reserves his time to compose and produce new songs.

Likewise, he also works as a producer for other artists, which he considers “It’s very enriching and generates feedback.”

Indeed, he recently produced the new release of the singer Soy Sofía and the publication of his album is imminent.

Regarding this facet, the musician stressed that he sees in it a job opportunity in the long term, and attributes a great entity to his personal experience. It is that the artist plays several instruments, and, without going any further, estimates that 90% of his songs were made entirely by him, which has become his own brand, and an attraction that explodes in the shows. of the. As he highlighted, in the presentations he puts together his tracks with “different instruments and totally live”, alone.