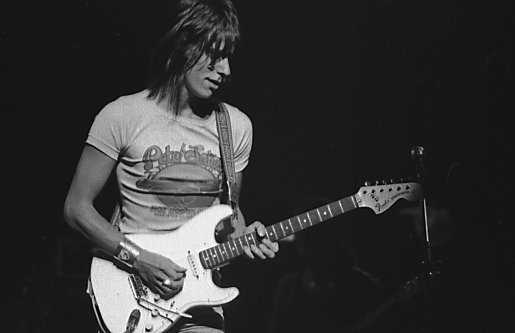 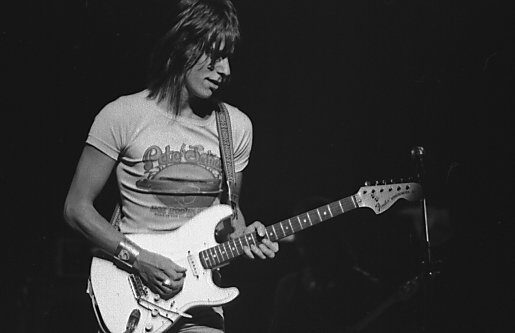 Genius guitarist, British Jeff Beck died on Tuesday, January 10, at the age of 78. Ranked fifth best guitarist of all time by the magazine Rolling Stoneshe had sailed with virtuosity between blues, hard-rock, jazz-rock, electronic and pop music.

Rock legend, who became famous with the Yardbirds group, guitarist Jeff Beck died on Tuesday January 10. ” After suddenly contracting bacterial meningitis, he passed away peacefully. his family announced in a statement. During his career, he won 8 Grammy Awards and was inducted into the Rock’n’Roll Hall of Fame twice.

Geoffrey Arnold Beck, known as Jeff Beck, was born on June 24, 1944 in Wallington, in the southern suburbs of London. As a child, he sang in a church choir, before learning the piano, then the electric guitar, whose skilful and ingenious use would establish his legend. Influenced by guitarists like Les Paul or Cliff Gallup, and blues legends like BB King, he will try several times to build his own instrument. After studying at Wimbledon College of Art and several odd jobs, he joined the formation of singer Screaming Lord Sutch in 1962, then participated in several rock and rhythm’n’blues groups.

But it is the meeting with the Yarbirds in 1965 that will make the guitarist’s career take off. Through his sister, Beck meets Jimmy Page, who will allow him to succeed Eric Clapton within the group. After experiencing initial success with the song For Your Love, the ensemble brought together two of the greatest English guitarists of the time: Jimmy Page and Jeff Beck. In the album Roger the Engineer, the latter experiments with several effects, such as distortion and the wah-wah pedal. Until Beck’s departure in 1966, the band would record most of their chart-topping hits in the UK.

In 1967, he formed the first Jeff Beck Group with vocalist Rod Stewart, guitarist Ron Wood and keyboardist Nicky Hopkins. Two albums will be produced, Truth in 1968, an album in line with those of the Yarbirds, then Beck Ola in 1969, bearer of the premises of hard-rock. The group’s programming at the Woodstock Festival will be compromised by the joint departure of Steward and Wood to form The Faces. Never mind, the second Jeff Beck Group will bring together singer and guitarist Bobby Tench, keyboardist Max Middleton, bassist Clive Chaman and drummer Cozy Powell, in April 1971.

Essentially composed by Beck, the album Rough and Ready, released in October 1971, sees the intertwining of soul, jazz and rock influences, and sometimes psychedelic atmospheres. The following, soberly titled Jeff Beck Group, will be recorded in Memphis and produced by Steve Crooper in 1972. The soul influence is more significant there, as evidenced by several covers, in particular that of I Got To Have A Song by Stevie Wonder. After an American tour the same year, the band disbanded: Tench and Middleton left the band while Beck formed a trio with bassist Tim Bogert and drummer Carmine Appice.

This “supergroup” released the album Beck, Bogert and Appice in 1973, to critical acclaim for the instrumental prowess despite poor commercial success. More rock, the album is mainly marked by covers: Sweet Sweet Surrender by Don Nix, I’m So Proud by Curtis Mayfield, and Superstition, by Stevie Wonder. Although recording sessions began for a second album, Jeff Beck decided to put an end to the collaboration of the three musicians in the spring of 1974.

The guitarist began his solo career in 1975 with the album Blow by Blow, which will remain his greatest commercial success. Produced by George Martin, this jazz-rock album features collaborations with Max Middleton, bassist Phil Chen and drummer Richard Bailey, and a composition by Stevie Wonder, Cause We’ve Ended As Lovers. The following year, the release of the album Wiredconfirms Beck’s jazz rock virtuosity, notably with the cover of the standard Goodbye Pork Pie Hat by Charles Mingus.

During 1979, Beck gradually recorded the album There and Backwhich would be moderately successful, although it featured one of his greatest hits, The Pump. The recording of Flash in 1985, including collaborations with Rod Stewart, Carmine Appice, Jan Hammer, will earn him his first Grammy Award for Song Space. For Guitar Shop, Jeff Beck forms a trio, with Tony Hymas and drummer Terry Bozzio. Released in 1989, the album won the Grammy for Best Rock Instrumental Performance.

In 2003, the album Jeff marks the anchor in the electro-guitar style, experienced in Who Else! (1999) and You Had it Coming (2000), albums tinged with techno influences. The piece Plan B will earn him his fourth Grammy Award, a second time for best rock instrumental performance. In April 2009, Jeff Beck entered the Rock and Roll Hall of Fame., before returning with the album Emotion and Concussion in 2010. Recorded with a symphonic ensemble and featuring classic themes, this ambitious album won three new Grammys.

At the end of a career at the crossroads of styles, Jeff Beck has undeniably earned his place in the pantheon of rock guitarists. Evidenced by the rain of tributes that have been addressed to him, including Mick Jagger, Paul Young or Rod Stewart. ” The Six-Stringed Warrior is no longer here for us to admire what he was able to do from our mortal emotions,” laments Jimmy Page, the guitarist of Led Zeppelin.