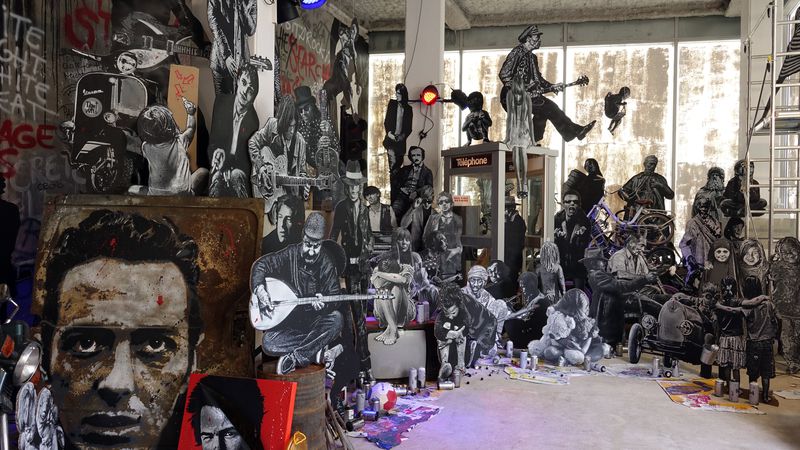 For forty years, Jef Aérosol’s stencils have been displayed on the walls of the capital. On the occasion of this anniversary, an exhibition of unpublished works is dedicated to him at the Mathgoth gallery, in the 12th arrondissement of Paris, until November 5.

It is an extraordinary exhibition. 600 m2 entirely devoted to Jef Aérosol, a key figure in street art. The artist celebrates 40 years of creation there, during which his stencils, representing faces or silhouettes in black and white and signed with a red arrow, have traveled the world.

His artistic career began in 1982, in the streets of Tours. “The stencil was a fairly practical method, to paint quickly and everywhere in the public space. Just like the aerosol can. But the fact of using the stencil by making it more realistic, starting from photos, it was something quite new at the time”, says the artist. “It seems to me that there is also an urgency in this stencil painting, as soon as we are in the street, the need to go quickly is essential. I like this urgent side which does not is reminiscent of the music I listen to, rock’n’roll, punk. And it’s also about meeting and sharing with the people you meet.”

Reflecting his passions, the Parisian exhibition, created jointly with the mathgoth gallerythus plunges visitors into the universe of the street artist, thanks to two distinct spaces which highlight the different aspects of his work with more personal and unpublished works.

On one side, the works in the public space. 200 characters are staged in an installation recreating the atmosphere of the street. Salvage elements, a telephone box, tires and old motorcycles, as well as aerosol cans surround the painted boxes to reinforce the aspect of urban jungle. A sound and musical accompaniment envelops the whole.

By discovering this large space in length, I immediately saw a street, a vacant lot, a construction site, so I had the idea of ​​this installation having this raw side and urban chaos.

“It’s a kind of impossible crowd since we have Michelangelo next to Jimi Hendrix and a little kid, celebrities, anonymous people, people from several centuries ago and people from today. hui. But this crowd finds coherence by a unit of size, they are all life-size, and a unit of treatment and color, since they are all made in stencil and in black and white”, emphasizes the artist.

On the other hand, are presented new pieces created in his studio in Lille and intended for galleries. They deal with themes dear to Jef Aerosol, childhood, music or urban landscapes. Personal photos and documents as well as self-portraits offer a more retrospective dimension to this space.

Among these paintings, stands a reproduction of one of his monumental frescoes entitled “Chuuuttt!!!”. It is one of the best known and most photographed in the capital, a self-portrait of the artist with his eyes wide open and his index finger on his mouth, echoing the tumult of the city. A work created in 2011, opposite the Pompidou Center and which, when it was designed, was to be temporary.

“This is the first large fresco I’ve done and it marks a turning point for me. I never imagined for a second that it was going to appeal to this point and mark the public so much”, he remembers. “It has made it possible to generate other projects, collaborations with foreign galleries in particular. It is one of the major stages of my forty years of stencils”

At 65, Jef Aérosol intends to stay true to his roots by continuing to paint his stencils in public spaces, in addition to his complementary work in the studio. A passion more than a search for posterity, even after 40 years of career.

“If only one thing had to be remembered from these 40 years, it would be less the images than all that it generated in terms of encounters, travels and adventures”, he concludes. “The notion of posterity does not matter to me. For frescoes, we often spend several days on scaffolding with my teams and from the first bomb hit until the inauguration, and it is always beautiful exchanges that remain.”

Free exhibition at the Mathgoth gallery until November 5.

Jef Aérosol, pioneer of street-art, at the heart of a Parisian exhibition