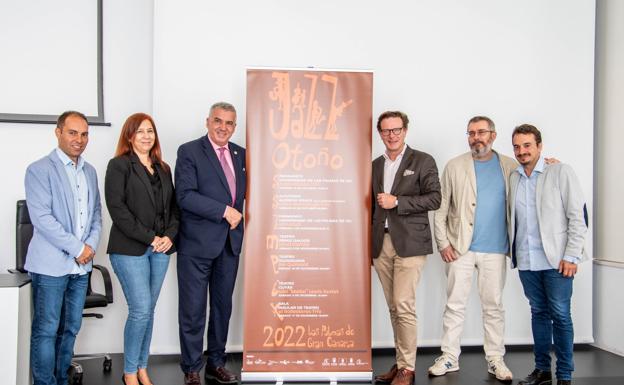 The Paraninfo of the ULPGC hosts this Friday, starting at 7:00 p.m., the first concert of the cycle, by the Sergio Alonso Trío

The initiative
born in 2010 as a jazz music bet that brings together in a single festival or season the main musical nuclei of the city of Las Palmas de Gran Canaria, to offer citizens an attractive set of performances of the highest musical level within the field of Jazz.

The Autumn Jazz cycle was
presented this Thursday in the Sala de Piedra of the institutional headquarters of the ULPGC, in an act that was attended by the Rector Lluís Serra, the Vice-rector for Culture, Sports and Social Activation of the Campuses, Cristina Roca, the director of the Jazz Classroom of the ULPGC, Óliver Curbelo, Gonzalo Ubani, artistic director of the Cuyás Theater, Tilman Kuttenkeuler, general director of the Auditorium and Theater Foundation of Las Palmas de Gran Canaria and Daniel Tapia, director of the Guiniguada Theater.

ubani, On behalf of Cuyás, he recalled the origin of the cycle as a way of coordinating to avoid, as happened once, two powerful jazz recitals overlapping in date and time in the city of Las Palmas de Gran Canaria, and brought forward the concerts of the cuban pianist
Iván ‘Melón’ Luis, at the Cuyás Theater, and Yul Ballesteros, at the Insular Theater Hall.

Daniel Tapiafor his part, highlighted the collaboration between institutions and scenic spaces in order to expand the cultural possibilities of the city, as well as the fact that the Guiniguada theater has programmed the concert of
Quimont Pinepromoting a greater presence of female artists.

Tilman Kuttenkeuler He recalled that this edition is special for the Alfredo Kraus Auditorium for the 25th anniversary of this space. As he explained, the Auditorium has El Rincón del Jazz, a genuine and different space, with which an atmosphere of a true “jazz club” is created in the Auditorium itself and in which the Icelandic concert will be held
Sunna Gunnlaugs Trio. Kuttenkeuler highlighted that the concert of
Michael Camiloa Dominican pianist with a renowned career, will take place at the Pérez Galdós Theater.

The director of the ULPGC Jazz Classroom, Óliver Curbelo, explained that the Auditorium of the institutional headquarters will host two concerts by Canarian artists, the
Sergio Alonso Trio and the Zumurrud group.

Lastly, the
rector Lluis Serra He thanked the institutions involved for their participation, underlining the wealth of talent that converges in the programming for this year 2022, which forms “an attractive group of high musical level”, and of which the ULPGC is honored to be part.

The poster for this thirteenth edition is made up of a total of seven concerts that will be held between October 14 and December 17 at the Auditorium of the University of Las Palmas de Gran Canaria, Alfredo Kraus Auditorium, Pérez Galdós Theater, Guiniguada Theater , Cuyás Theater and Insular Theater Hall.

The opening this edition will be performed by Sergio Alonso Trío, made up of Sergio Alonso (piano and artistic direction), Carlos Meneses (double bass) and Takeo Takahashi (drums). This concert takes place this Friday, starting at 7:00 p.m., in the Auditorium of the University of Las Palmas de Gran Canaria.

Sunna Gunnlaugs Trio, one of the most outstanding Icelandic jazz groups, will be presented to the public of the Alfredo Kraus Auditorium
on saturday october 22at 8:30 pm, with the new album ‘Ancestry’, based on compositions for a trio and improvisations, as well as pieces for a quartet.