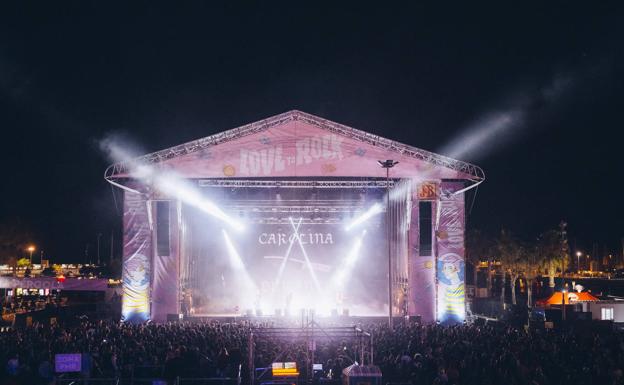 One of the editions of the ‘Love to rock’ festival. / LP

The ‘Love to Rock’ festival opens its doors to a weekend full of music, gastronomic exhibitions and activities for the whole family. More than 7,000 people will enjoy the event that is consolidated in the calendar as one of the last festivals of the season.

The chosen environment is La Marina de Valencia, a unique enclave to enjoy music with the sea in the background.

The musical program will take place on two different stages: Marina Norte and La Pérgola. State artists fully consolidated in the state pop-rock scene will pass through these spaces, such as IZAL, Elyella, Xoel López, La La Love You or Anni B Sweet with Los Estanques; emerging bands like Arde Bogotá, Karavana or Cora Yako; and Valencian performers such as La Cámara Roja and La Fúmiga. In addition, the offer is completed with DJ sessions of various styles.

Love to Rock will open its doors this Friday at 5:30 p.m. Later, at 6:00 p.m., Dj Fat Gordon will welcome attendees with a session full of rock rhythms. The performances will begin at 7:00 p.m. with the indie-rock of Karavana. The first day of the festival will feature Valencian protagonism thanks to the presence of The Red Room and La Fúmiga. The former will play at 8:30 p.m. at the launch of the album Años Luz II. In addition, they will review their extensive discography. On the other hand, starting at 9:30 p.m., La Fúmiga will make the public dance thanks to its powerful wind section, accompanied by a positive and very festive attitude. After a summer full of performances, the group from Alzira is about to close the Fotosíntesi tour with which they have presented their second full-length.

At 11:15 p.m. one of the most special concerts of Love to Rock 2022 will begin. Thus, the IZAL group will take advantage of its time at the festival to perform the last concert in the Valencian Community before its indefinite break. After more than 10 years of experience and five studio albums, the group announced last February that they will take a break when the current tour ends. At the concert in Valencia, the band will present its most recent work, Hogar, and will perform the songs that have made it one of the most successful groups in recent years.

The line-up of the first day of Love to Rock is completed with DJ Ele and Don Flúor.

The Love to Rock will resume activity on Saturday 15 from 11 in the morning. For more than 12 hours, the two stages of the festival will host 8 performances and the sessions of another 8 DJs. In this case, it will be the DJ Redmoon who plays the first songs. At 11:30 am it will be the turn of Cora Yako, a group that is beginning to stand out in state indie-rock. One hour later, at 12:30 pm, attendees will have the opportunity to taste the dry rock of the duet Niña Coyote eta Chico Tornado, who arrives with a new album under his arm.

The concerts will resume at 5:00 p.m. with the psychedelic collaboration of Anni B Sweet and Los Estanques, who have just released the album Comfortable Bubble and Unexpected Elephant. At 6:30 p.m., Galician Xoel López will celebrate the tenth anniversary of the first album he released under his name, Atlántico. One of last year’s revelations, Arde Bogotá, will take the stage at Marina Norte at 8:15 p.m.

The Andalusian artist Zahara will be one of the great protagonists of the day. At 10:30 p.m., the vocalist will stage La Puta Rave, a show where she performs songs from the album Puta and classics from her repertoire with an electronic package. On the other hand, the duet Elyella will be in charge of closing Love to Rock from 00:00 and will make the public dance with their fusion of indie, pop, rock and electronic music.

During the celebration of the festival, La Marina de Valencia will also host a wide range of cuisine and sports and active leisure activities for the family audience. In this sense, Love Food Experience will be a unique gastronomy space with the presence of chefs from some of the best places in Valencia. Thus, the chefs Germán Carrizo, from the Fierro restaurant; Alejandro Platero, Top Chef 3 finalist who is in charge of Platero Utopic Food; Vicente Patiño, head of Siati; and Sergio Giraldo, from the Señuelo restaurant, will present exclusive dishes for those attending the festival. Thus, top-level culinary proposals will be developed in a dynamic format during the two days.

On the other hand, this year the festival will set up a special area for fathers, mothers and children: the Love Kids Space. There, families can relax and have fun with games and fun activities under the supervision of a team of monitors. In this way, the festival responds to the extensive participation of the family audience in previous editions.

The latest tickets available for Love to Rock can be purchased on the festival website: Currently, tickets are available for the general public (60 euros), VIP (90 euros) and children under 13 (15 or 30 euros) . Likewise, seats can be purchased for each of the days of the festival: general tickets for Friday 14 (€40), VIP (€65) and minors (€15) and for Saturday 15 (35 euros, 60 euros and 15 euros). In all cases, the corresponding management fees will apply.

Izal, Xoel López, Zahara and La Cámara Roja among the artists of the ‘Love to rock’ festival in Valencia