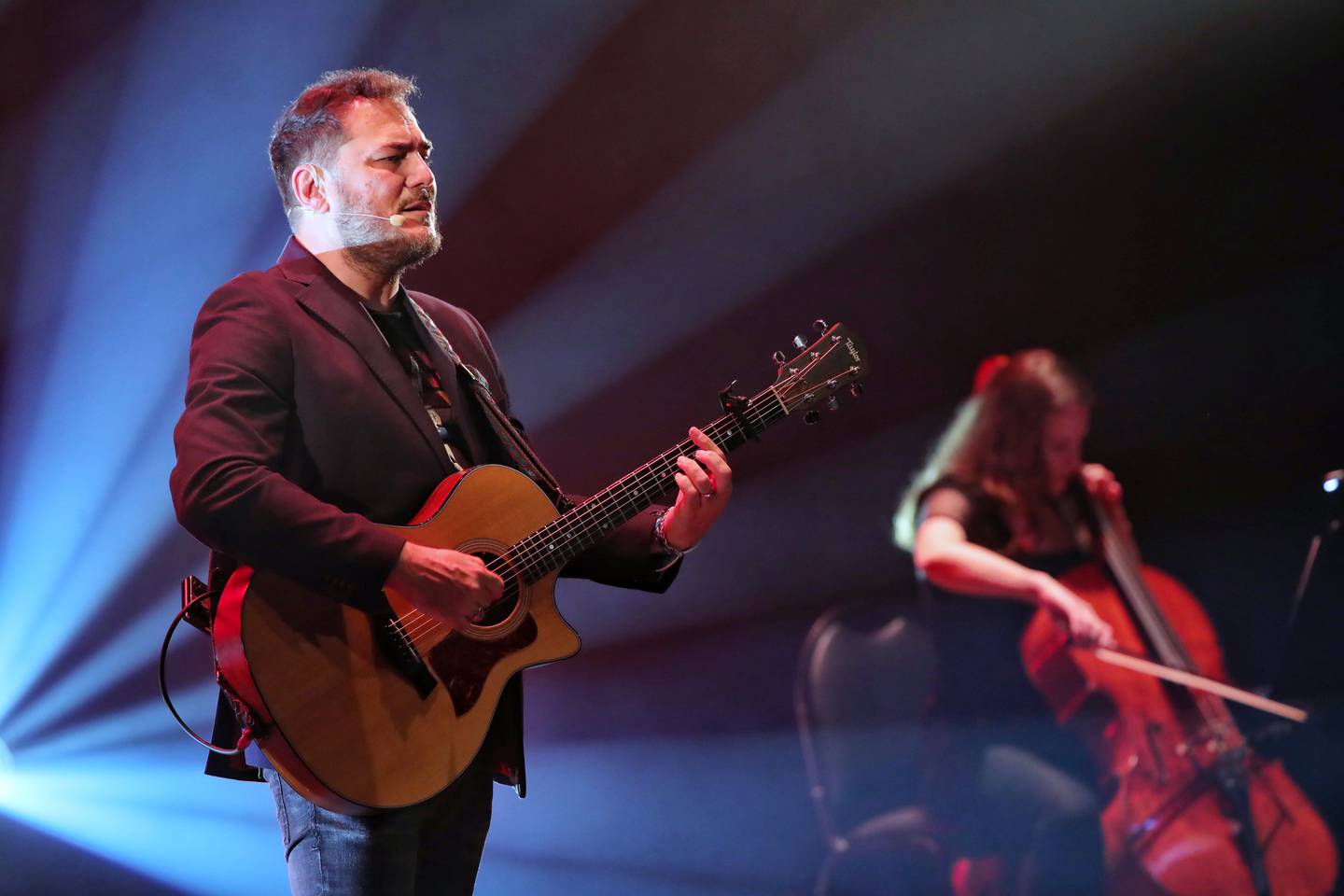 Ismael Serrano gave terrible news: he is going to retire from music… finally he couldn’t change the world with his songs. The information was given exclusively to Sandra, a journalist who interviewed him on the radio program the given word. The bomb dropped her precisely in the space where she came to talk about her new album we will be. From his part there will be no more music, no tours, no concerts.

The fictitious conversation, but with hints of reality, between Ismael and Sandra took place in a performance two and a half hours. At that time, the singer-songwriter from Madrid combined the theater with his new songs and the most endearing songs of a 25-year career. This is how he celebrated in concert on the night of Friday, October 14, at the Melico Salazar theater with his faithful followers, who remained calm, and dedicated themselves to savoring the evening, understanding that the “news” was one more part of that walk. for the emotions.

Tears, sweat and salt water, in general, are healing. Therapeutic, Ismael highlighted, and all of them he lived and enjoyed with Sandra, who in addition to being his interviewer was his ex-partner. And it is that throughout his show, Ismael subtly led his audience from one surprise to another.

The singer-songwriter has everything to envelop and fascinate his audience: whether he speaks or sings, his voice is heard as a pleasant whisper. Also, the show we will be has the power to interest the audience in the story it is telling, one that is becoming more and more personal and whose purpose is to review the 25-year career of one of the most important author voices in Spain.

Ismael Serrano: “I vindicate the sad songs in the face of the tyranny of not being able to feel bad”

Ismael appeared on stage after 8 pm The sweet melodies of a piano welcomed him but were silenced by the clapping ovation of an excited audience that was reunited with their artist after four years of absence and a pandemic in between. He kept the same outfit throughout the night, in which he combined denim pants, a Stars Wars t-shirt, a blazer and white high-top tennis shoes.

Speaking of the pandemic, Ismael used the covid-19 resource in his show. It was the virus that meant that after finishing the interview with Sandra he had to stay confined in the studio while they analyze a new variant. Although the disease stopped and hurt the world, the artist does not hold a grudge against him.

I am not, Because we were, Vertigo, It happens that sometimes and Let go were the initial songs, interspersed between dialogues of the protagonist and Sandra. In the conversation there were confessions, laughter and questions. The public got into the story and was then rewarded with a melody.

Serrano, as Sandra called him, even sang some verses of Take On Mefrom A-ha, to remember old times with her, whom we never saw, and surprise everyone else.

The musician continued speaking of hope, of that value that human beings cling to because of the need for things to make sense and that is precisely why songs are written, hoping that this world “makes a little sense”.

Alfonsina and the sea, Little creature and If the noise would shut up were also part of the repertoire. While, I came from the North He recalled the joy of the Spanish when the doors of Latin America were opened to him to present his art.

Shut up and dance, Meanwhile, The first one to wake up, Without you by my side, The call, Come and What will you be doing now They were chanted and applauded. Suddenly, emotions ran high when Serrano mentioned Dad, tell me again, a classic that he told Sandra who now does not sing out of reproach or resentment. She now sees the events from another place and she concentrates on trying to be that father who tells a story to her children.

This song was modified by the artist to reflect today’s themes. Some people couldn’t hold back their tears when he sang: “Now those who died in Vietnam are dying in the Ukraine.”

The show by Ismael Serrano featured a splendid set list of 22 songs. After piece 18, the Spaniard left the stage but he understood the language of his audience and there was no need for “another, another”: the applause made him return.

It was time to sing what has been listed as one of the saddest songs in the world: Memory. To this were added Lately and Ana. From the list of must-sees, only the endearing Impossible loves, although it would be a lie to say that someone was upset by that absence after a recital in which Serrano reviewed his musical history.

“I want to thank everyone, everyone for joining us tonight. Thank you for assuming the challenge that we proposed, thank you for participating in some way in the game that the show proposes and that consists of going through these 25 years of career that we have traveled. We thank you for being there. One feels accompanied.

“The songs have a therapeutic effect, they are a balm in difficult times, they help you to know that there is someone like you who questions the world, who feels attacked by it and finds accompaniment through the song to cope with adversity . Perhaps they have once felt tempted to throw in the towel, it happens to all of us”, said the singer-songwriter who came from Madrid to give away an unforgettable night in which paradoxically “we were happy singing sad songs”.