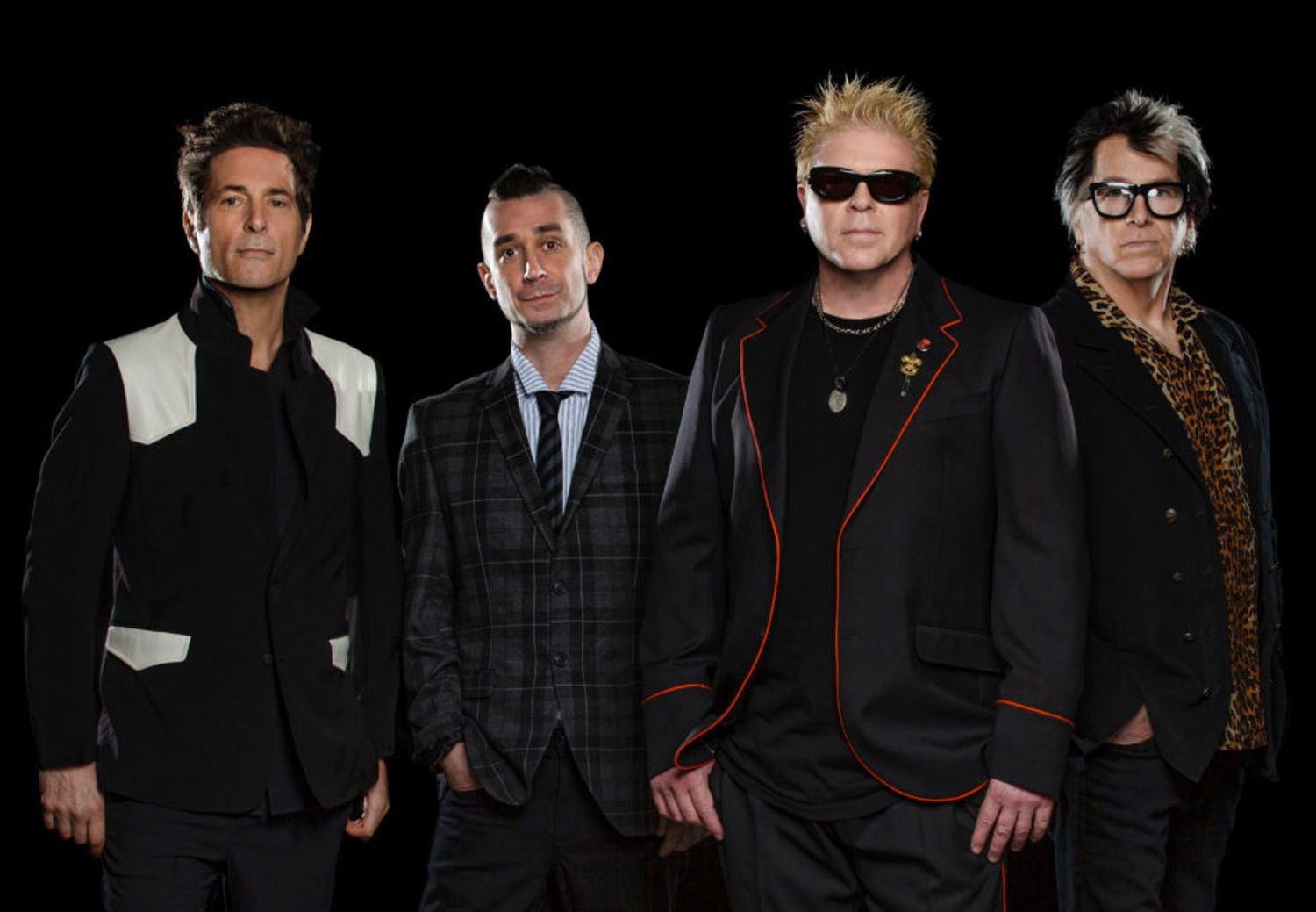 Dexter Holland and Noodles say it all on Let The Bad Times Roll.

On the occasion of the release of Let The Bad Times Roll10th album by The OffspringDexter Holland (singer and guitarist) and Noodles (guitarist) gave an interview to OUI FM to talk about the creative process of the record, their vision of the current world and their relationship with French fans.

We are in a funny time to release an album. How do you feel about this?

Noodles : We weren’t sure if we should release it now or if we should wait until we can go on tour. We were close to finishing this album when the world stopped, so we decided to change a couple of things. Since the record was ready, we decided to release it, because the fans wanted to hear it.

dexter : We thought it was the right time to release this record. It may not be the time for the world, but for us it is good! [rires]

Why did it take so long to get out Let The Bad Times Roll ?

Noodles : We write music all the time. We knew an album was going to come out eventually. We had thought about releasing an EP or other singles when Coming For You came out five years ago. But we continued to work on music with the aim of releasing a record. Rock ‘n’ roll is albums, singles are mostly for pop artists. But this record took longer to find its time. But he eventually found her.

How did you know it was his time?

dexter : These are the songs. There’s been a lot to write about over the past few years and it’s inspired us. There are a lot of things happening, the social crisis, the addiction, what’s happening with our leaders, and it always happens, we didn’t want to wait until it was over to release this record.

Noodles : We were afraid that everything would suddenly be better and that this record would no longer make sense! [rires] We hope things get better, but we can’t count on it. By releasing this record now, fans immediately understand the context. There is a joking side, but also a desire to give people hope.

dexter : There’s definitely a message of hope in this record, but I think it’s interesting to reflect on what’s happening to us, but we’re not out of the woods yet! There are always problems in the world.

Noodles : The only thing that seems to be coming to an end is the pandemic, but there are still economic, racial and social injustices, there are still issues worth talking about.

dexter : Did you notice that there were no more shootings at the moment? Because if you’re an armed madman, you still don’t want to catch the Covid, so you stay at home! But it’s starting to come back. The news was about something else, but it’s starting to come back. Even terrorists don’t go out anymore! The situation is serious, but the absurdity around it all makes us laugh.

Noodles : I already miss the pandemic!

How did you manage to maintain consistency on this record after taking so long to write it?

dexter : We write music all the time. Most of the tracks on this disc were written in recent years. We write songs without worrying about where they will go later, but we put them together at the end, like a puzzle, and see which ones go best together.

Noodles : That said, Coming For You was released five years ago, but may be doing better now than when it came out.

You re-recorded Gone Away more than 20 years after its release, in a much quieter version, why?

Noodles : We did an acoustic version with piano live, it brought a quieter moment, but with a lot of emotion. And the fans were happy, they had been asking for that for a long time. We started doing this five years ago and they wanted a studio version of this version of Gone Away. So we did.

Do you intend to extend this on a whole album?

dexter : We don’t intend to stretch that over an entire album. We did a few acoustic gigs recently, it’s very different from what we usually do, it’s usually done in small venues, we like it, but we don’t want to do that on an entire record. We are a rock band above all, we will stick to that.

Tell us about your recovery Hall of the Mountain King.

Noodles : We found it funny, to take a piece of classical music that is over 150 years old. The classic is often on a pedestal and you shouldn’t do anything with it.

dexter : So we made a punk version of it! We made a funny mix between this classic melody and this punk rhythm. That’s the good thing about making albums, you couldn’t afford to do that in a single. It’s part of the personality of the group.

Noodles : It would be fun to do it in concert! Fans are going to think “what is that? » [rires] It’s the moment a little anything from the concert. And you also need that kind of moment in the records.

dexter : We are going to help young people to get into the classics. The future of punk is in the classic! And I sincerely believe it! [rires]

How does it feel to be on your 10th record?

dexter : We didn’t realize that! I don’t see it like that, I don’t count the records, but I started to realize when people told us about it a few months ago. It’s something to realize, but it’s not a trophy to hang on the wall.

Noodles : I wanted a big Roman numeral “X” on the cover! [rires] When we drink together, no one tells me that I’m on my 10th beer!

Noodles : Oh you know, it’s a Thursday night for me!

dexter : We should take out a beer on this occasion!

dexter : But yes ! We’re holding something there.

This is your third album produced by Bob Rock. Tell us about your relationship with him.

dexter : We’ve worked with Bob for 12 years and our relationship continues to evolve. But we hit it off right away.

Noodles : A lot of people don’t know that he started out in punk rock in Vancouver. He had access to a studio, so the bands that recorded with him were punk bands. And when he was with the Payolas, since it was new wave and at the time people didn’t know where to classify them, he played with punk bands.

dexter : So he had this background and when we started working together, we immediately understood each other because we had a common vision on music, how to make good records. And his knowledge of sound is encyclopedic!

Noodles : And when he doesn’t know, he’s not afraid to experiment! We really enjoyed trying new things with him.

What did you experience on this record?

Noodles : Mostly guitar sounds. Look at the riff of Army Of One, for example, we had to look for a lot of ways to give it depth while making it unique. There is a surf side, but at the same time a bit rough.

dexter : It’s not easy to describe a sound with words. It is best to cite references. For this guitar sound, our starting point was We Want The Airwaves by the Ramones. And when you say that to Bob, he says “Ok”, he makes adjustments, and he makes sure that we can appropriate this sound.

Did you have any new influences on this record?

Noodles : We listen to new stuff, but we always come back to the music we fell in love with in our youth, the old punk bands that helped us find our place in the world.

dexter : Our influences don’t necessarily come from particular bands or musicians, but more from styles. Sometimes we try to give our songs a rock feeling, but this time we wanted to give a direct Offspring side, therefore more punk oriented.

You haven’t played indoors in France for nine years. Have you already thought about your next tours despite the situation?

Noodles : We want to play as soon as possible, but the virus is holding us back for now. For now, everything is on hold. In the United States, with the vaccine, we are starting to gain ground, there are 100 million doses that are distributed. Apparently half the population will soon be vaccinated. We hope the rest of the world will do the same, so we can get together again. I don’t think everything will return to normal all of a sudden, there will necessarily be a transition period. People are going to have to get used to it again and when it’s good, the concerts will start again.

dexter : I hadn’t realized that we hadn’t played indoors in France in 10 years. It was at the Bataclan, so it touched us to learn what had happened there, as we had been there.

Noodles: There had been another shooting in San Bernardino not long after, and it didn’t affect me as much as the one at the Bataclan. We have to come back to the theater soon. We have a lot of great fans in France since the days of Smash, we love them.

dexter : The other bands who toured in Europe told us “Germany was great, but France isn’t as good”, but for us, it went well from the start! We know that the French love Rage Against The Machine and Nirvana, and we managed to make our place in it.

Noodles : We are a bit of a mix of these two groups! [rires]

dexter : We can’t wait to go back anyway. In the next dates, it will be mostly outdoors, but we love the intimacy of indoor concerts, there is another unique proximity.