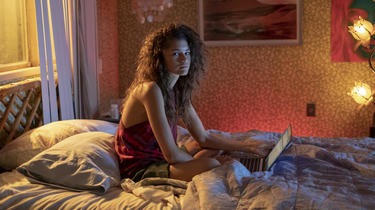 Lottie Moss, the sister of famous model Kate Moss, has revealed she is in rehab in a video posted to her TikTok account in which she mentions the ‘Euphoria’ series.

We can see the young woman (who recently lost her modeling contracts by stripping naked on paying sites like OnlyFans), singing the lyrics to the song “Mount Everest” by Labrinth, with the caption: “When everyone glamorizes drugs, but you’re literally in rehab.” The young woman adds “having taken Euphoria a little too seriously”.

Does she insinuate by this that the series encouraged her to consume drugs, or that it on the contrary helped her to make the decision to stop by entering a cure? This mention of Lotti Moss adds fuel to the fire in any case in the heated debate between the teams of Euphoria and the detractors of the series, who denounce its violence and its darkness and especially accuse it of inciting young people to use drugs.

I think I took euphoria too literally u guys

Euphoria in the crosshairs of anti-drug associations

The association DARE (Drug Abuse Resistance Education) thus criticizes the program for promoting drugs. She believes that the series with Zendaya offers a glamorous image that makes young people want to consume it.

A mistaken point of view according to Zendaya, who plays the main role. “Our series is in no way a moral tale to teach people how to live their lives or what they should do,” she explained in an interview with Entertainment Weekly. “On the contrary, the sentiment behind Euphoria, all we have and what I have always tried to do is to help people feel a little less alone in the face of their experience and their pain”, adds the one who delivers the masterful performance of a drugged high school girl.

According to Zendaya, the series does not promote drugs and can even be a support for young people who are going through difficult situations. “And maybe they don’t feel like they’re the only ones going through or managing what they’re going through,” says the young actress, who won an Emmy Award and then talks about an episode that was particularly marked the public, episode 5 of season 2 which was recently unveiled on HBO in the United States and OCS in France.

“My biggest hope is that people can relate to this episode and that those who need to heal and grow with Rue hopefully by the end of this season feel that hope and feel this change in her,” Zendaya explains in her interview. “A lot of people have reached out to me and found so many parallels of all ages, from all walks of life,” she adds.

Lotti Moss’ ill-being is not new

Has Lottie Moss seen this episode 5? For the time being, we do not know how long the young woman must still remain in rehab. The influencer’s father, Peter Moss, told The Sun on Monday that her treatment was going “very well”.

Lottie had spoken in the past about her issues with anxiety and substance abuse. “I’ve struggled a lot over the past few years with myself and anxiety and stuff, right now is the first time I’ve put myself first and worked on myself to make sure I get the most out of my life. I feel like the best and truest version of myself!”, she admitted via Instagram in April 2020.

“My struggles caused me to act out of character and eventually I think I was becoming a person that I didn’t really like, which is why I forget myself with substances and belittle myself through neglect of my mental health and my general health.” Lottie said at the time that taking this route made it “very difficult” for her to get out. “I was surrounding myself with people who had a similar mental state to mine and I can see now that it wasn’t helping,” she added.

“I took Euphoria a little too seriously”: Lottie, the sister of Kate Moss, announces that she is in rehab