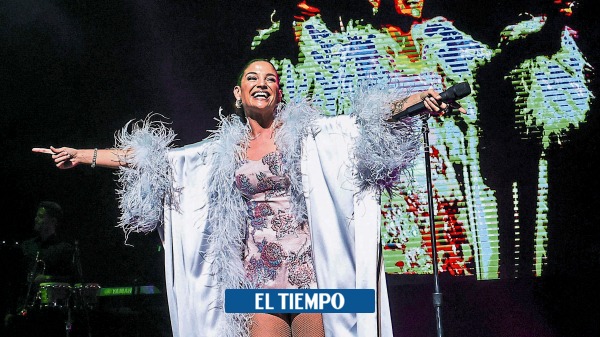 There are still many things left from that young woman who played and sang in the subway and in the streets of Madrid. Perhaps the most important is that popular imprint that she leaves in all her compositions, even those she did for La Quinta Estación, the group that made her internationally known and from which, in 2010, she separated in a “traumatic” and “traumatic” way. terrible”, in his own words, to pursue a solo career.

(Also read: The adventure of powerful female voices and a seductive piano, on HBO Max)

After living in Mexico —a country that believed in his voice, his compositions and his group, La Quinta Estación— for more than eight years, he went to Miami and fully immersed himself in his project as a soloist. This is how the album Natalia Jiménez was born, released on June 21, 2011 and which debuted as number one on iTunes Pop Latino. And there is no doubt that from that first album to today, Natalia Jiménez’s career has evolved. From ballads, pop-rock and ranchera, the artist —who settled permanently in Mexico— opted for the so-called regional Mexican genre, in which she has stood out as a great exponent.

This year, the Spanish singer-songwriter returns to Colombia, bringing her Anthology 20 Years Tour, which will be on March 23 at the Teatro de la Universidad de Medellín, and on the 24th of the same month, at the Movistar Arena in Bogotá. About this tour, which brings together the most important of her production, the singer-songwriter spoke with EL TIEMPO.

All projects start from an idea. What did she have in mind when she thought of ‘Anthology 20 Years Tour’?
​
Look, it was very curious because I was on the highway, going to a small town called Tapalpa, near Guadalajara, Jalisco, and I asked: hey, what year is this? And I started to do the math and I said to myself, wow, I’m going to celebrate 20 years of my career. And I said, why don’t we celebrate with a tour and a record and all that. We organized it, it took six or seven months and we started in August in Puerto Rico and we have already visited the Dominican Republic, Venezuela, Mexico, Miami, Texas and we have more dates in the United States to be confirmed. We will also be in Colombia.

What are we going to see in Colombia on this ‘tour’?
​
What we are doing is a tour of all my songs, from the beginning of my career to today. You’re going to hear all the hits and all the songs that I’ve made a video of.

There is also a very intimate moment during the concert, with family photos.
​
They will be able to see photos from when I was little, I take a tour out loud off through the images. The entire show of lights, costumes, graphics, the musicians, the musical arrangements. People leave the concerts happy and in the end we close with mariachi. That’s when everything goes to hell.

(You may be interested in: “Looking inward was something that claimed my life”: Carla Morrison)

How has the public received this tour?
​
Incredibly good. We carry 90 percent of the dates and they have been sold out, all concerts, packed to the brim. I see a lot of people excited to see me in concert again, to see me on stage again, and I am also very excited to see them again. It has been very emotional to be able to celebrate 20 years of my career and to know that I have an audience that still adores me and to be able to show them how grateful I am to them.

Of the young woman from La Quinta Estación, what has changed in Natalia?
​
That I am no longer so naive and that I no longer let myself be robbed (laughs), that every time they give me a contract I take it with a lawyer, I learned that and I learned that I am very comfortable alone.

It refers to his departure from La Quinta Estación. How was the retreat of the group that made you known?
​
It was absolutely traumatic, it was terrible, but to this day I am very happy with the decision I made, and in the end each one continued with their career and with their concerns. I wanted to continue being a singer and I have done it all this time. I’ve been a soloist for longer than the time I was in the group. I did what I had to do for myself, at the time.

It has been very emotional to be able to celebrate 20 years of my career and to know that I have an audience that still adores me and to be able to show them how grateful I am to them.

Much of your career has been developed in Mexico, why?
​
Because when I was in Spain, with the group, we took our ‘demo’ to a lot of places and nobody paid attention to us, nobody signed us, everyone gave a damn about our ‘demo’, and in the end a contact in Mexico interested him and they signed us directly with BMG in Mexico, and we went to live there. It was there that I started my career. I started as a singer in Madrid, but with the group we started in Mexico.

Something strange, being Spanish.
​
I think it was for the best. At the end of the day, although Spain may seem from a distance, I don’t know, I’m Spanish and I tell you that Spain is very small, and when you have a competition of twenty more artists who sound only in Spain and you have to go on tour, the truth is not you have a lot to go to, they are the same cities, the same places.

Why do you think this process has been better?
​
I am very glad that our career began in Mexico, because we began to go to Central America, South America and the United States. Suddenly you have hundreds of millions of people watching you, instead of just 45 watching you, that’s a much larger, more diverse audience. And from Spain it is difficult to go to other European countries. Right now it is easier because there is already a lot of immigration and in Germany there are Venezuelans, Colombians, Cubans, Spaniards, there is everything, but at that time, no. I am very glad that we were able to start our career in Mexico because it made us much more international.

He went from pop to regional Mexican music. Was it something logical living in Mexico?
​
What I’ve always wanted to do is what I feel like doing. When I was in the group almost all my compositions were directed to that genre, for example, Me muero is a mariachi song now, Something else is a song that is done in mariachi now, Me dueles, the Sin frenos album that was Grammy winner, I wrote half of it and that half of the record is very regional, very Mexican.

The interest in the Mexican regional is not from now.
​
I have always been interested in regional Mexican music, since I arrived in Mexico, and I always wanted to, but for some reasons or others I had not been able to, until I released the records from Mexico de mi corazón I and II, which became a hit I don’t want to move from there anymore because I love it and it’s what I always dreamed of.

It has taken from the Mexican sources.
​
Of course, the last two albums are all songs by Juan Gabriel, who was also sung by Rocío Durcal, many are also by José Alfredo Jiménez, because they are songs from the Mexican songbook that you can’t let go of. Juan Gabriel was the greatest composer of modern regional music. I admire him very much, I loved him very much and it was thanks to him that I was encouraged to do this. ‘Juanga’ told me, Natalia, you have everything to do it, why don’t you do it, why don’t you sing regional, and he gave me the ‘little kick’. He gave me great pleasure because it was a dream I had and in the end on stage I feel like the artist I always wanted to be.

He spoke at the beginning of a new tour and a new album. What is this new record about?
​
It’s of Anthology 20 years coming this year. It’s a record we’re making with Cheché Alara. The disc comes with all these songs in new versions. We have been singing the same songs for 20 years and I want to give them a refresh, we are going to dress them in a different way, we are going to dress them up, because it is 20 years since we have completed this great repertoire.

In this context, what do you think of reggaeton?
​
It seems very good to me that there is music for everyone, it seems good to me that whoever likes to ‘twerk’, well that ‘twerk’, in the end it is musical variety. Now with networks and applications we have the opportunity to listen to what we want at the time we want. Now you hear what you want. If you want to listen to reggaeton, well, listen to it, if not, then why bother?

“I learned that I am very comfortable alone”: Natalia Jiménez