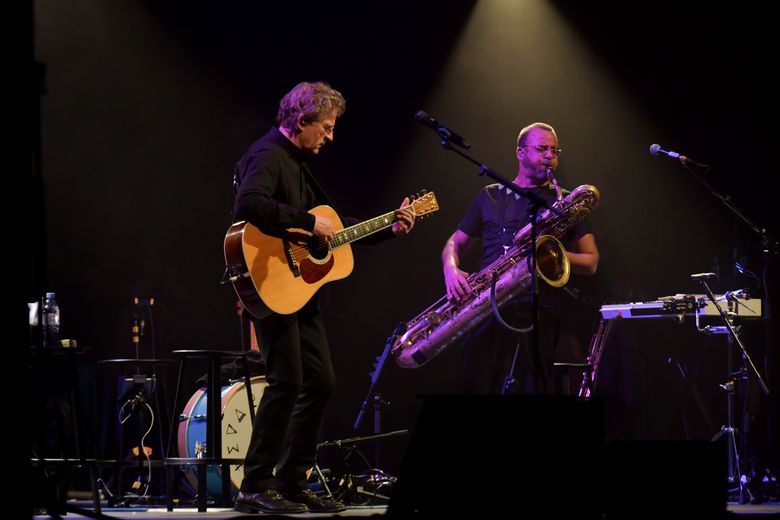 Forty years after his last visit to our city, Hubert-Félix Thiéfaine was a resounding success on Saturday evening at the Parc des Expos with his “Unplugged” concert.

“Unplugged”, or “unplugged”. It is an acoustic tour that the artist offers, in a small committee: just him and four musicians. The formula is effective, sober and appeals to the public. His latest album, “Géographie du vide”, released in October, lends itself well to this type of exercise.

From the first minutes of the concert, we felt an audience with support, won over to the cause of Hubert-Félix Thiéfaine. In opening, “The alley of the dead” announces the color: the singer is in good shape, his group is well established. We continue with “542 moons and about 7 days”, which he explains dates from 1990, written in New York, a period when he was trying to consider time in the manner of the Amerindians.

Hubert-Félix Thiéfaine is appreciated by the public for his very personal way of writing. His poetic texts are always so rich from year to year. The humor is not absent. “Animal in quarantine”, another title from the 90s, takes on almost another meaning after two years of the pandemic, and laughs as much, with a squeaky laugh. At this stage of the concert, coincidence or not, a bat flew above the stage, adding a bit of fantasy to the performance.

Always in terms of humor, the man then attacks “Pulque, Mezcal y Tequila”, “to celebrate my fourteenth year without alcohol! – ipse says.

The singer’s voice sometimes evokes Alain Bashung on his latest albums. He frequently accompanies himself on guitar and harmonica, like a French Bob Dylan. The musicians around him fascinate with their versatility: the drummer is also a very good guitarist, the bassist is a Jimi Hendrix of the cello, the keyboardist improvises as a drummer at the end of the evening, and the saxophonist impresses with his virtuosity and his superb improvisations, not to mention that he hits the tambourine with one hand while continuing to play the saxophone with the other!

Another character accompanies the artists: this strange bust posed near the piano, which represents Hubert-Félix Thiéfaine himself – the cover of his latest album.

The classics follow one another among lesser-known pieces. “Lorelei” (second passage of the bat in the spotlight), “I leave it to the wind”, “Vendôme Gardenal Snack”, “The crazy and the lost”, one of his nuggets, because as he sings a little later in “Early morning 4 10 hours of summer”: “Madness has always saved me and prevented me from being mad”. This passion for words, this way of turning them is his signature. As he explains to the Lot-et-Garonnais, “when you write, the words seem to be driven by a kind of force, an underground force. And in the end, they correspond to the reality of the world…”

An encore, and finally, “The Joint Cutter’s Daughter” arrives, giving the audience an opportunity to gather around the stage and do the backing vocals. A last moment of unity for a concert where the bond between Hubert-Félix Thiéfaine and his fans appeared stronger than ever.