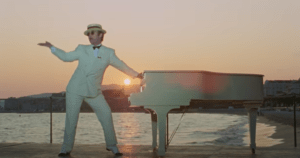 In this new Summer Diary dedicated to legendary artists, we tell you how Elton John fell in love with the Côte d’Azur. From the recording of one of his albums in Berre-les-Alpes, in 1979, to the improvisation of a concert in a restaurant in Cannes in 2021, we are talking about a serious story and not a just flirting. It must be said that the composer of Your song is still an honorary citizen of the city of Nice since 1997! A story by Nathalie Michet.

After more than 50 years of career, Elton John is about to hang up the gloves. The British artist is indeed on his last world tour. When this one is finished, it is likely that Rocketman will spend even more time than before in the south of France.

So comfortable in his adopted region, Elton John did not hesitate one day in the summer of 2021 to improvise a mini concert at La Guérite restaurant, on the side of the Lérins Islands, in Cannes. A totally unexpected live on Cold Heart; remix of several songs from the Londoner, with the voice of Dua Lipa, and orchestrated by PNAU. Let us underline that this is one of the biggest hits of the past year. A proof of the stainless power of Elton John. Besides, it’s not over: we are expecting a new version of Tiny dancer. This 1971 hit has just been re-recorded duet with Britney Spears. This single, whose release is scheduled for August, will mark the great return of Brit Brit to the front of the stage since the lifting of its guardianship.

But back to the Côte d’Azur. How did we come to see the 75-year-old star play the atmosphere on Ile Sainte-Marguerite? To begin, it must be understood that in our region, Elton John is really at home. Powner of a 1920s villa on Mont-Boron, the pop genius was made an honorary citizen of the city of Nice in 1997. A ceremony organized at the time by the former mayor, Jacques Peyrat, in the presence of HSH Prince Albert II. Decidedly pampered by the Town Hall, Elton John then had the mission, in 2001, to inaugurate the concert hall of the Palais Nikaïa.

Since then, Rocktetman has spent a lot of time around the Baie des Anges. However, the artist often invites his friends, anonymous or famous, to join him. Hugh Grant, Donatella Versace and Catherine Zeta-Jones were notably among the happy couple. And if ” Sorry seems to be the hardest word“, the singer did not hesitate, in 2012, to make his mea culpa in a Nice restaurant, the Little House, to reconcile with Madonna. A few days earlier, the Londoner had had very harsh words for the Queen of Pop. In an interview, he called Madonna ” funfair stripper“. Fortunately, the specialties of Nice and the sweetness of life on the Riviera will have made it possible to bury the hatchet.

An album recorded in Berre-les-Alpes

When we try to understand when the story between Elton John and the Côte d’Azur began, we get a little lost. However, it can be assumed that love at first sight dates back to 1979. That summer, the artist spent time in the region. Indeed, he invests the premises of the studio Super Bearin Berre-les-Alpes, to begin the recording of 21 to 33. This album, born in the hinterland of Nice, met with mixed success. However, during this stay, a new door opens in the career of Elton John.

A duet with France Gall

Indeed, between two recording sessions and a few vodkas and tonics, the Briton listens to the radio. The ear on the French FM, he hears for the first time the songs of France Gall and Michel Berger. Completely under the spell, Elton John contacted the two artists and offered them a collaboration. This beautiful idea quickly leads to a true friendship and a famous duet with France Gall released in 1980. Listed on the B side of the single Confessionsit’s good give to give which will meet with the most success in France. Michel Berger wrote the lyrics while Elton John composed the music.

A clip on the Croisette

However, this Francophile parenthesis hides a rather bleak picture. At that time, in the 1980s, the singer suffered the full brunt of his addictions to alcohol and cocaine. A constant celebrity but more irregular successes, tours that never end… This extraordinary life turns out to be exhausting. The getaways on the Côte d’Azur therefore bring comfort to Elton John. But also: they stimulate his imagination. The proof in 1983: the artist chose the Croisette and the Promenade des Anglais to put in images I’m still standing. Note that Monaco also appears at the opening of this crazy clip.

Under the blue sky Brilliant from the Côte d’Azur, Elton John and his dancers dynamite the hushed atmospheres of the Carlton and the Negresco. This whimsical and cheerful clip has gone down in history. And for good reason, it serves as the final scene in the film Rocketman, by Dexter Fletcher. The Elton John biopic, co-produced by Elton John, received a standing ovation from the public when it premiered in 2019. It was, of course, at the Cannes Film Festival.


You can view our social media profiles here as well as other pages related to them here.https://kjovi.com/related-pages/