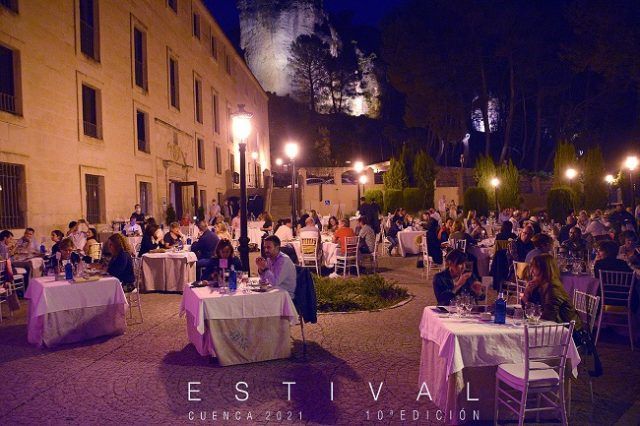 They will take place on Friday June 24 and July 1 on the Solán de Cabras stage of the Parador de Cuenca. Chef Miguel Ángel Martínez will be in charge of the menu

One more year, gastronomy, live music, solidarity and a World Heritage stage will have the space they always deserve in a musical and artistic festival. Thus and as it happened in 2021, Estival Cuenca 22 has scheduled two dinner-concerts in its eleventh edition. Both will take place at the Parador de Cuenca, will have groups from Cuenca as protagonists and have a charitable character.

PINCHOS, MENU AND RESERVATIONS. First of all, on Friday June 24, the duo Her Itage will perform in the Cloister of the Parador, pairing their feminine proposal with the selection of pinchos that the Bailén chef Miguel Ángel Martínez will prepare for the occasion.

For their part, Petit Swing, also from Cuenca, will do the same on Friday, July 1 at the Solán de Cabras Stage. Miguel Ángel Martínez will repeat as chef, although on this occasion he will prepare a special menu for this evening, which will have the Huécar river gorge, the Hanging Houses and the Cuenca sunset as exceptional guests.

Reservations can be made by sending an email to Cuenca@parador.es or by calling 969232320. In both cases, part of the cover will go to the NGO Menudos Corazones and another charity.

HER ITAGE. Her Itage (Her = her and Heritage = heritage) is a project for the recovery and dissemination of musical heritage in which women are protagonists as composers and performers. Through concerts, workshops and conferences, especially in rural areas, they make the various voices of music visible to promote more equitable and inclusive communities. The project is led by Elena Martínez (Quintanar del Rey, voice, clarinet and melodica) and Marta Aparicio (Vellisca, Spanish guitar, electric guitar and choirs)

MIGUEL ANGEL MARTINEZ. Born in Bailén, he passed the exams in Paradores in 2003. He has worked in the Paradores of Nerja, Baiona, Carmona, Málaga Golf and Cuenca, where he has held the position of Head Chef since 2016. Among the prizes and awards he has received in his career, the “Excellent Bailenense” Award in 2009 stands out. the Young Award for Bailén (2016) or the Best Pintxo of Madrid Fusión 2017 thanks to its Cuenca garlic-mortar and black garlic. Its premises and values ​​are the defense of updated traditional gastronomy, defending and promoting the products and producers of the area, the province and the community.

You can buy the subscription for 9 days and 17 concerts until May 31 for only 140 euros, less than 8 euros per concert:

Link to the purchase of season tickets for Estival Cuenca 22

You can also buy individual tickets for the concerts at this link: