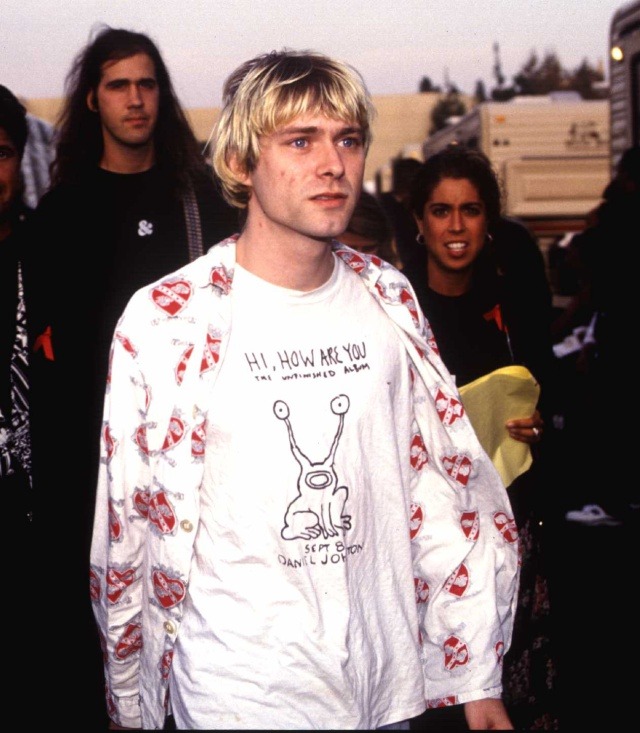 Guns N’ Roses had tried to get close to Nirvana. They admired them. But it was not a reciprocal feeling. For Cobain “it was a band that had absolutely nothing to say” and did not approve of their behavior. Despite the invitation, they refused to share a tour with them. And Axl Rose, offended, displayed all his verbal crudeness. On September 8, 1992, the face to face took place… and the dialectical war broke out.

The admiration was not mutual

Despite their marked differences – in sound and attitude – Nirvana and Guns N’ Roses were two great rock bands with a fundamental influence on the 90s. They could have hit it off, or even worked together. But events took a very different turn. When, in 1991, Nevermid catapulted the Aberdeen band into the musical sensation of the moment, they quickly made sure they weren’t lumped in with the Californian band. Cobain was a recognized defender of equality and feminism, far removed from the sexist lyrics that Axl sang with his group.

Rose, however, was an avowed Nirvana fan and had repeatedly begged for a collaboration with the representatives of alternative rock. Even during an interview filmed during the shooting of the video for Don’t cry, Axl Rose wore a blue baseball cap with the NIRVANA logo on the front. The same hat that, in a scene of the clip, appears next to him when he is lying in the psychiatrist’s office. Unfortunately, it was unrequited love. The admiration was not mutual. And the response she received was not what she expected.

Kurt Cobain was determined to distance himself by pointing to Guns N’Roses as the antithesis of Nirvana’s values ​​and spirit.. As Metallica guitarist Kirk Hammett would later say, he wanted nothing to do with Axl, “because I didn’t approve of his behavior”. This quote from Kurt during a promotional tour is famous: “We are not like Guns N’ Roses, the typical band that has absolutely nothing to say”.

Even though Nirvana went to great lengths to publicly display their animosity, Axl Rose did not give up on his efforts and proposed to open the concerts of his stadium tour with Metallica (between July and October 1992). As expected, Cobain’s group declined the offer. “…they wanted us to open for them,” recalled Dave Grohl. “So Axl had been calling Kurt non-stop. One day, we were walking to an airport and Kurt said, ‘Shit!. Axl Rose doesn’t stop calling me’. I think this represented something else. Nirvana didn’t want to become Guns N’ Roses, so Kurt started spouting garbage in interviews, and Axl started talking back to him. It was like an exchange of teenage nonsense.”

“Both should go to jail”

Axl Rose was enraged and tired of the disrespect he received from his colleagues. On September 2, 1992, during one of the stops of his tour with Metallica at the Citrus Bowl in Orlando (Florida), he displayed incredible cruelty on stage. A story in the American tabloids accused the Hole singer of using heroin while she was pregnant. Axl pushed all limits saying: “To me, basically, he’s a fucking junkie with a junkie woman. If the baby is born deformed, I think they should both go to prison.” (By then, little Frances Bean had been born two weeks)

An unavoidable face to face

The fuse, already quite hot, exploded just a week after Rose’s unfortunate comments. On September 8, 1992, the MTV Music Video Awards were held and, coincidentally, both bands were nominated and they coincided at the Pauley Pavilion in Los Angeles. His performance was also planned during the gala: Nirvana played Lithium and Guns N’ Roses closed the event with a duet with Elton John from November Rain. The meeting was inevitable.

Kurt Cobain in a photo from 1992 / Getty Images/Paul Harris

The Metallica guitarist was caught in the middle and he remembered the face to face in an interview for Revolver: “I was sitting backstage, talking to Kurt, and suddenly Axl appears, he looks at me, and he looks at Kurt. And I thought ‘Oh no!’ And he went right up to Kurt and said, ‘What’s wrong with you, you son of a bitch? which problem you have?. And Kurt said, ‘Whatever, man’. And Axl, ‘I’m going to kick your ass! Come on. Let’s go!. And Kurt kept saying, ‘Anything, man.’ … Axl stormed off and Kurt looked at me, ‘Man, I don’t know. This guy is crazy’. I was shocked. I told him, ‘I have to get out of here.’ And he’s like, ‘Yeah, it’s all been so weird.’”

“Shut up your bitch or you’re going to end up on the floor!”

The most notorious verbal dispute occurred when Courtney Love asked Rose (mockingly) if he would be the godfather of her newborn baby. “She yelled at him, ‘Axl, Axl, you’re going to be her godfather!’” Krist Novoselic (bassist) wrote after her. “When she heard it, Axl got really angry, he walked over to Kurt and threatened him.” “Shut up your bitch or you’re going to end up on the floor!” Cobain walked over to his wife and sarcastically yelled, ‘Shut the fuck up, bitch!'” Courtney and Stephanie Seymour (then Rose’s girlfriend) also exchanged some insults and the musicians of both bands (Krist Novoselic and Duff McKagan) almost came to blows moments before Nirvana came on stage to sing Lithium.

“I spit on Axl’s keyboard, it was either that or beat the crap out of him”

Later, when preparing the two pianos for the final performance of Guns N’Roses with Elton John… I spit on Axl’s keyboard, it was either that or beat the crap out of him. Cobain said. “I saw his piano there, and I had the opportunity to spit all over the keyboard.” But he was wrong. The piano that ended up with Kurt’s saliva was Elton John’s. He had been shot in the butt. In response, several members of the Los Angeles crew tried to overturn Nirvana’s trailer, but the only ones inside were newborn Frances Bean and her nanny. Supposedly, as soon as they found out, they stopped, but the ‘joke’ could have had a dramatic ending. At least neither band walked out that night empty handed.

Of course, the confrontation did not end there. For example, in an interview with The Advocate (LGBTQ + publication) Cobain argued with a fan who asked him to reconcile with his “enemy”: “No, kid, you’re completely wrong. That guy is a fucking sexist and a racist and a homophobe, and you can’t be on his side and be on our side at the same time.”

For its part, Axl Rose burned his famous Nirvana logo baseball cap. She did it in public, at one of the Use Your Illusion tour concerts, and organized an entire cremation ceremony. When the garment was engulfed in flames, he deposited it on the stage, smiling. Smells like teen spirit sounded in the background.

Guns N’ Roses vs. Nirvana: an “impossible love” that led to fierce hatred and a war of insults


Check out our social media profiles as well as other pages related to themhttps://kjovi.com/related-pages/