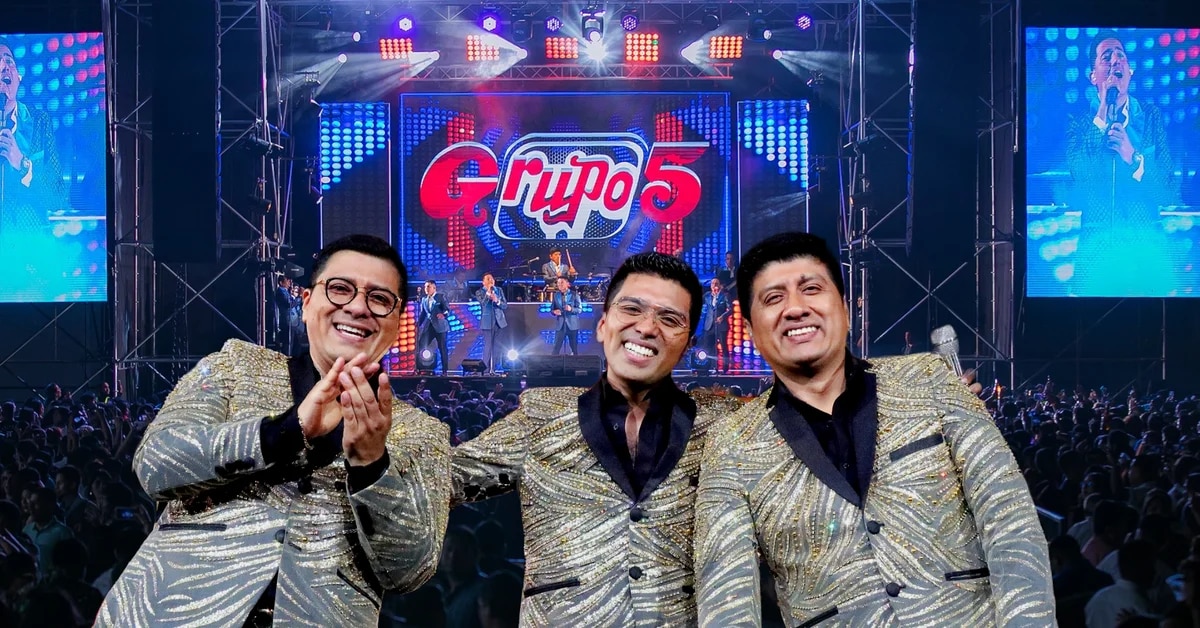 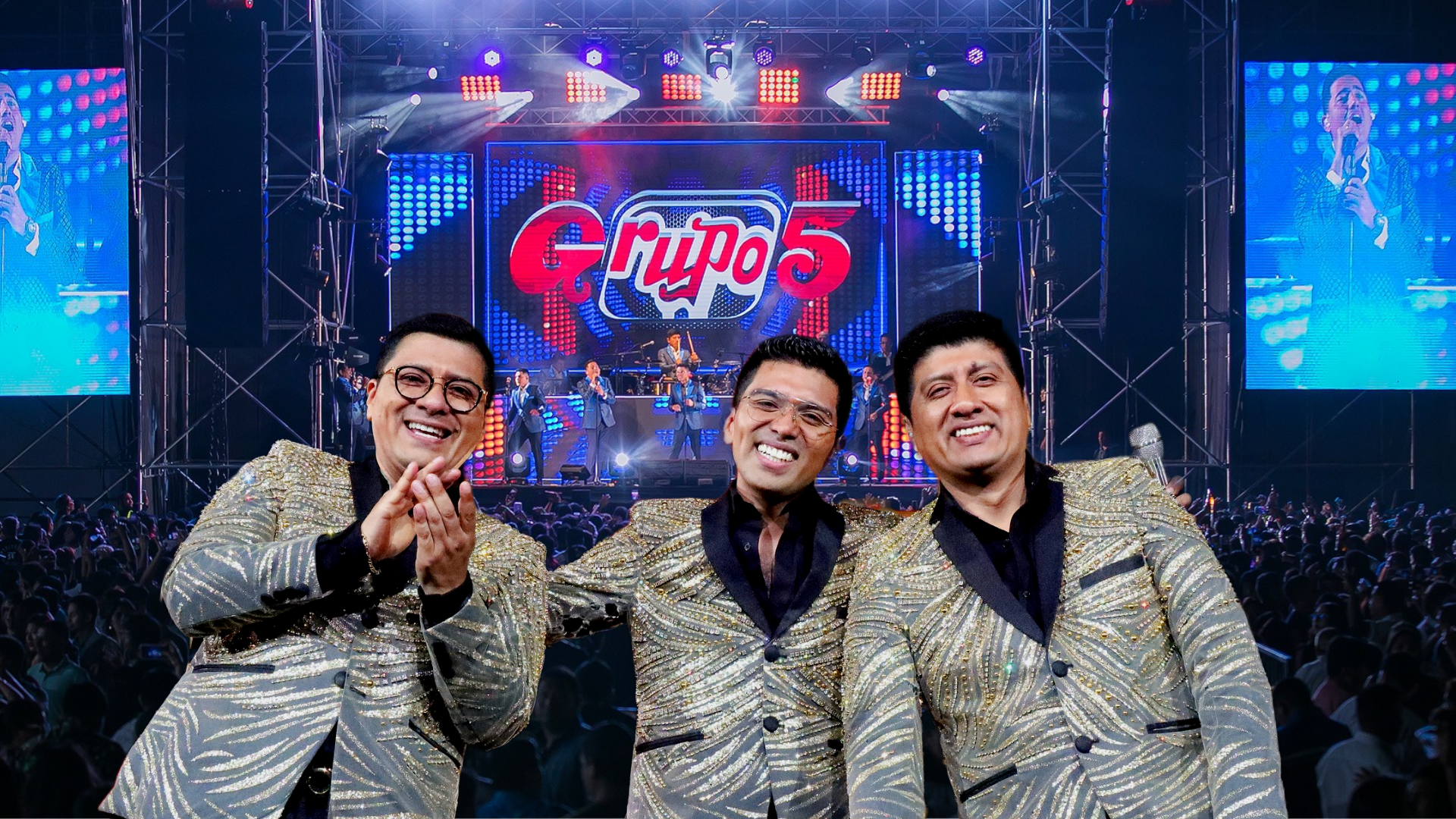 Grupo 5 fans will be able to enjoy a special show for their anniversary.

The “Gold Group of Peru” will make his fans dance for three days. Cumbia is one of the favorite genres of Peruvians. If there was any doubt about it, the interpreters of “Mix así se goza” are a clear example that in just a few hours they can make a sold out by presentation.

His musical legacy of Team 5 it not only has a national impact, but also abroad. To celebrate 50 years of formation, the group, created by the brothers Elmer and Víctor Yaipén Uypánthey will organize a mega event that will last three days.

Fans will have three opportunities to listen to their popular songs, such as “Motor and motive”“The rhythm of my heart”, “The lover”, “Pure heart”, “You leave”, “What a pity”, “Who heals”, “Your hypocrisy”, among others.

It may interest you: Grupo 5 achieves a record with ticket sales for its concerts for its 50th anniversary at the San Marcos Stadium

If you have already secured your ticket for one of the dates, we present a guide that will help you calculate how much money you are going to invest in this party of Team 5. We share the approximate prices of what the transportation will cost to get there, merchandisingfood, drinks, and more.

On January 31, 1973, Chiclayo witnessed the beginning of one of the cumbia phenomena that has had the most impact in the country. Since that time, they have not stopped filling locals and adding followers of all ages.

To celebrate this anniversary, the group will carry out three concert at the San Marcos stadium. These have been scheduled for Friday March 31, Saturday 1 and Sunday 2 April. All shows will start at 7:00 pm

Peruvians who wish to attend one of the dates will have to purchase one of the tickets that have been divided into seven categories, ranging from platinum (the most expensive) to popular zone (the cheapest).

So that you can build your budget, prices range from S/49.00 to S/385.00being the regular amount without any discount with a bank.

42 thousand people will enjoy more than 1 hour of concert at the San Marcos stadium in Lima, Peru. 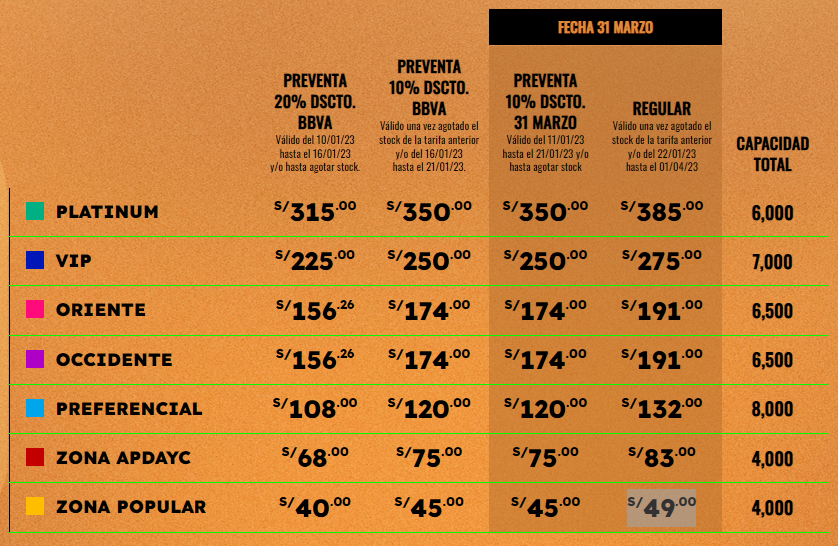 Those who have experience attending concerts, in large or small venues, know that you must come with an additional budget to buy drinks and food. There are fixed stalls that are in charge of offering these products and there are also vendors who walk through the areas, carrying sandwiches, beer, sweets and more.

If we take an approximate, taking into account events such as Bad Bunny, Karol G, Arctic Monkeys, among others, a glass of beer can cost between S/20.00 and S/25.00. In the case of bottles of water and/or soft drinks, they have a value between S/15.00 and S/20.00

What about the sandwiches? This is another of the products that circulate the most before and during the show. A bread with chorizo, accompanied by creams and without potatoes, It can have a value between S/15.00 and S/18.00

In some events, these values ​​may increase or decrease. Even, on some occasions, when the show ends, buns with chicken, hamburger, among others, are offered at less than their initial cost.

It may interest you: Quackity on Twitch is excited to hear Grupo 5: “they are ‘rolotas’ with feeling”

For these shows there is an official sale, promoted by the same artist or the organizers. The other side of the coin is the sale of products offered by entrepreneurs, who prepare in advance to stamp polo shirts, caps, and gather items such as glasses, stickers, and other accessories.

In the surroundings, we can find poles from S/35.00 or S/40.00 The value may increase depending on the quality of the fabric, the design, among other factors.

This is also an opportunity for Peruvians who want to generate income with their creations. They even use social networks, such as tiktokto indicate in which area they will be, what they will take and the method of payment they receive.

Whereas the fans of Team 5 they will arrive from different destinations in Peru, already being in Lima, there are some alternatives to go to the San Marcos stadium, located at Av. Venezuela 3450-3452Surrounded by Lima.

– By bus: depending on the route and the destination of origin, the trip can last between 40 and 60 minutes. The Moovit platform allows us to know that the ticket is from S/1.50 and there are seven bus stations near the concert venue. Here check the lines that run through various districts and arrive at San Marcos.

Routes to get to San Marcos. (Moovite)

If you come from the interior of the country, the first thing is to know the state of the roads and check if the transport companies maintain the routes. Similarly, with air flights, since in some cities airports have been temporarily closed.

Considering that the first Grupo 5 concert will be held in the capital in March, we recommend that you make your hotel and ticket reservations in advance so you don’t have to worry about it at the last minute.

If it is your first time in the City of Kings, you can review our list of tourist destinations in Lima that you should meet at least once in your life.

Group 5: the memes of the fans who did not get tickets to the concert
Christian Yaipén thanks sold out and the second pre-sale for the ‘Group 5’ concert is enabled
“My last chance”: fans excited for the second date to see Group 5

Group 5 Concert: how much a fan will spend on tickets, tickets, beer and more