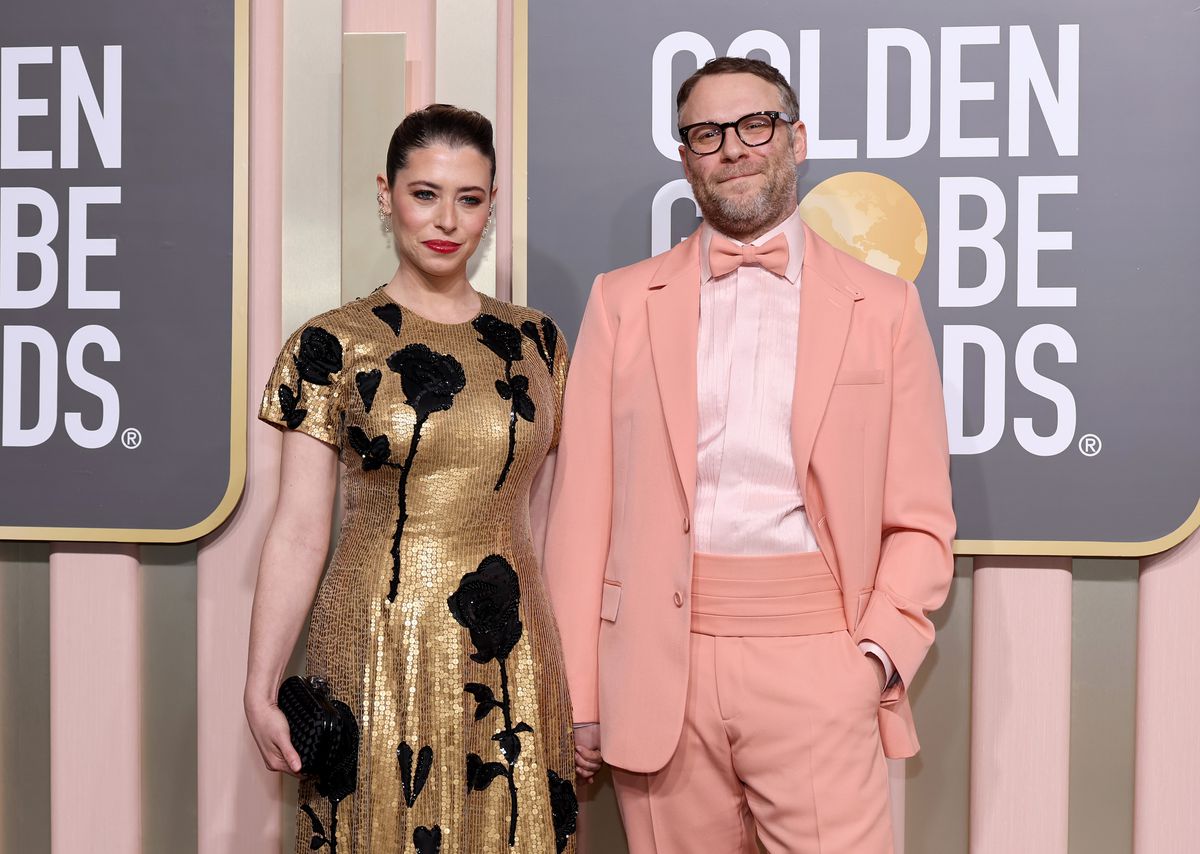 Seth Rogen’s pink tuxedo, like an American prom from the eighties, and signed by Dior, has been one of the great protagonists of the gala of the 80th edition of the Golden Globes. Rogen, confessed consumer between seven and eight joints a day, appeared on the red carpet hand in hand with his wife, Laurie Miller, and demonstrated, once again, that the adolescent nerd that in 2007 dazzled with Superbad He has grown into an unapologetic adult. And an unsuspected icon of men’s fashion. His looks create trends: the penultimate one, with a cardigan and Birkenstok clogs, has been described by the fashion website Highsnobiety as “the bookseller cool whom we would all want to emulate”.

Rogen entered the industry very young, sponsored by the king of American comedy, Judd Apatow. He signed him in the series Freaks and Geeks, which over time has become a work of worship. In 2012, Rogen himself explained the reasons why he was chosen for this role, in an interview conducted by Vanity Fair: “At the time I was confused, you know, because I hadn’t gotten any girl to sleep with me yet. I was incredibly angry and repressed, and I think they saw me as weird and sarcastic and started writing about it. But then they got to know me and they saw me as a nice guy, and that revealed itself as the story went on. Show”. Rogen rose to fame thanks to his starring role in a embarrassing mess (2007), which showed that he could lead the comedic bet of a major studio. An opportunity that he claimed by making his first scripts that he had written together with his childhood friend Evan Goldberg when they were both in high school: Superbad (2007) and super smoked (2008).

Many of these films fit into the category of stoner movie, a film subgenre whose plots revolve around the recreational use of cannabis. Rogen is a huge advocate and user of marijuana. Recently, director Steven Spielberg declared his admiration for these films by Rogen, whom he chose to play the role of Uncle Benny in his latest film (and a great winner of the Golden Globes), The Fabelmans: “Since I’ve never gotten high, I don’t see them as stoner movies. I see them as movies about a police officer giving sound, sensible advice to a young, impressionable person,” Spielberg explained.

In fact, in 2019, Rogen, together with his inseparable Goldberg, created The Houseplant, a company dedicated to selling both cannabis and home accessories for smokers. It is a luxury brand that sells, in Rogen’s own words, “the marijuana that he would like to smoke.” Also the objects (from lamps, handmade ceramic ashtrays specially adapted to leave the joint resting, rolling trays, or music vinyls to listen to while under the influence of marijuana) are the creative expression of Rogen’s love of marijuana. In recent years, the actor has gained great popularity on social networks by posting videos in which he appears manufacturing and consuming joints using his own products. But nothing to do with the big Lebowski: the image that Rogen offers is wrapped in impeccable contemporary design.

Until now, it was common to see parades through galas and movie premieres dressed in checkered shirts on the outside or the typical borrowed suit. There were few differences between the person and the boy-next-door character he played in his movies. According to his account, it was after the filming of Almost impossible (2019), with Charlize Theron, when she decided to renew her wardrobe. “I realized that he was going to be with Charlize in a lot of photos. That image came to my head. Beyonce next to Ed Sheeran dressed in a T-shirt and I didn’t want that.” He attended that premiere in a pink Paul Smith suit, with characteristics similar to the one he has worn at the last Golden Globes.

Since then, numerous men’s fashion publications have focused on the new style of the actor, who definitively abandoned the image of “comic friend to all your friends” to become a genuinely cool Hollywood actor. Just five months ago, a photo of Rogen shaved bald, dyed platinum blonde and dressed in a flowered shirt, tan pants, espadrilles and transparent glasses was described as “rabidly elegant” by highsnobiety. In 2019, S Fashion he applauded his stylistic turn for being interesting without “looking orchestrated by a Hollywood stylist,” alluding to the stars with perfect bodies and impeccable suits, but little personality, who populated the red carpets.

In 2023 the panorama is richer, as the Golden Globes catwalk has shown: impeccable tuxedos continue to abound (Eddie Murphy’s deserves a special mention), but Eddie Redmayne’s, from Valentino and with a large satin flower on the the lapel, no longer makes headlines, and the boasts of freedom queer figures like Billy Porter are happily integrated into the picture.

The case of Seth Rogen is a return to the origin: we are talking about a forty-year-old man with gray hair, glasses and a large complexion, but with an unexpected nose for fashion and enough self-confidence to cultivate it. Someone who assumes his age and his body and expresses his personality without fearing attention. It sounds cliché but the most obvious is always the most difficult.