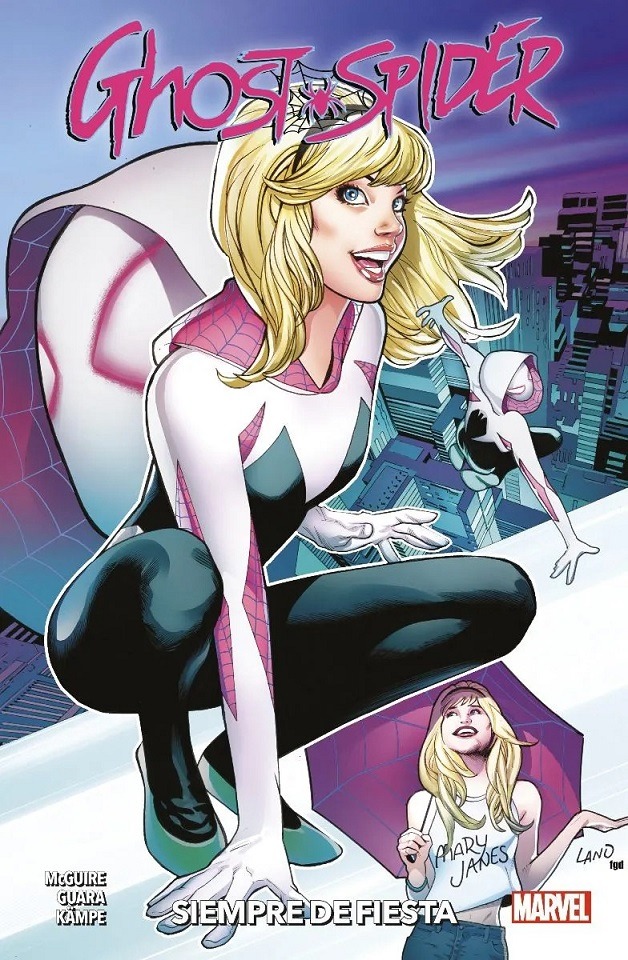 Be careful who dresses as a lamb, because it may be the biggest wolf you’ve ever seen.

This is a bad idea.
(And having a super sense for bad ideas, that’s saying a lot.)

Previously in Ghost-Spider, our dear Gwen managed to enroll in the ESU of Earth 616 thanks to Peter Parker and the Stark scholarship. However, Miles Warren noticed her and discovered that she was very much like the Gwen Stacy that he loved so much. While Gwen learned to keep her suit stable through food, she attended classes and made new friends, but it was all a plan of the Jackal.

Warren transformed one of his students to go after Gwen, but it didn’t do him much good and the Jackal killed him. Unfortunately, Miles Warren of Earth-65 found a way to stop Ghost-Spider and the Jackal of Earth-616 found a way to follow Gwen to his Earth. There, the two Warrens teamed up and captured Gwen Stacy. When the two argued about the romantic issue they had over her and that Warren-65 might take away her powers, the Jackal of Earth 616 killed Miles Warren-65. At that time Gwen Stacy’s friends arrived and she recovered her powers to be able to capture him with her networks – although she tried to use MJ as a hostage -. However, The Jackal fled and proposed to the leader of the Werewolf’s organization the services of him.

: Below is a brief summary of the plot arc. Skip to the next red warning if you want to avoid spoilers.

In the current story arc, a flashback opens about how the Storm brothers take some photos and then go to Latveria. Some time later, a little Gwen hears on television about her disappearance. In the present day, Gwen takes MJ and her friends to see her favorite group in alternate Earths. When they get home, they all prefer to ride in the car than on the swing, and Gwen feels that she is connecting with them more. Then, in the middle of the night, Ghost-Spider would help out with a hostage robbery, even though his dad didn’t like it, and then he’d go home to dinner and have her suit recharge. However, that same night the Storm brothers arrived after four years of being missing. According to their statement, they suddenly appeared in New York and did not know that so much time had passed between their stay in Latveria and their arrival. Soon after, her mother arrived and questioned George Stacy’s parenting abilities over her daughter Ghost-Spider — when she took advantage of her children by making them models after separating from her husband on multiple counts of murder —.

In the morning, Gwen worried about not seeing her father and went to the police station and there she found out about the Storm’s return. Later, fighting crime, he saved a woman and her dog, but noticed a beam of fire, prompting him to consult Reed Richards for multiversal possibilities as we see The Maker appear to be in the background as he seeks to recover your universe. When she finishes, Gwen travels to Universe 616 and goes to ESU. At the end of class, Peter tells her about the Kamala law and she Gwen gets upset at how they underestimate her when she can do a lot of good and when Spiderman himself was a teenager when she started. Since there was no solution and she needed a tutor, she Gwen passed the subject and warned Peter that she would not look for trouble, but if danger does look for her, that would be another matter.

Arriving disappointed on her Earth, Gwen used Gweneno’s suit to save lives in a fire, which caught the Storm’s attention and they made a video to form an alliance with Ghost-Spider. In the morning, she argued with her father about heroic issues and she claimed her right to be a heroine. When they calmed down, he understood her and she went her way. After seeing the Cellar Bandit, Ghost-Spider agreed to ally himself with the Storm brothers and met them and asked them some questions which they avoided. When they were ready, Ghost-Spider led them to take down an illegal shipment of drugs.

In a little flashback, we saw that the Storm brothers did arrive safely in Latveria and Doom helped them to have powers, and when Sue was ready she killed Victor and posed as him for a while. In the present day, some time after the collaborative fight, the Storm brothers met with Ghost-Spider to demand that he leave the city as there was not enough room for three superheroes. Gwen was outraged and refused, so they started a fight until Johnny asked to speak and explained that they don’t want to hurt her and they made him an offer: Sue would not show a fake video of the hit on the drug shipment and her reputation would remain good and good. not a criminal if she walked away and left the city with them.

Finally, Gwen accepted the offer and they gave her time to say goodbye to her loved ones. So, she told her father what happened while she was crying and left a voice message for MJ telling him that she was going away, but that she would come back, since she had a plan.

In general, we are facing an innovative, convincing, tough plot, and with a devastating closure for our beloved Ghost-Spider that hints at an incredible future to come — if Marvel Comics brings her a new and great regular series, except for cameos and Spider-Gwen: Gwenverse, to continue this story —. In the first instance, everything seems to be beautiful and a brilliant stage for Gwen Stacy along with her friends, but there always has to be one of lime and one of sand in the lives of all spider people, since none is completely happy in their two types. of life and it is that in her life on Earth 616 she is crushed by the Kamala Law of CUNA, which makes her feel undervalued, after everything she has lived.

Then, what she would think would be an act of luck would be the return to public life of the Storm brothers who were missing and now have powers. This part of the comic is just one of the best parts of the story, as it shows us how people who are looking for something can become and what they can do. Because of this, this whole part has us with our hearts in our fists, waiting to know what the final resolution is for Ghost-Spider and, once we know it, our response and theirs can be nothing more than to bow our heads and know that the protagonists do not always have a good life and do not always win. But, from our point of view and what we have learned with The Amazing Spider-Man, Spider-Man Universe and Spidergeddon… a battle may be lost, but the war remains to be seen.

As for the characters, Ghost-Spider, Peter Parker tries to explain as correctly as possible the new situation that Gwen is going to have to face in Universe 616, but he utterly fails to connect with her and to empathize with her, which could Explain himself by how recent the situation is and by the resemblance to his Gwen, although that does not excuse him. Captain Stacy becomes a policeman again, but becomes more distant with his daughter as he understands the serious danger that his daughter is in continuously, which is something that worries him every day, as well as the return of the Storm brothers . However, he does make attempts to understand her daughter after several talks with her. Sue Storm and Johnny Storm act as great influencers all the time, both before disappearing and after – although they have a moment in which they must recover -. However, if there is something that differentiates them, it is that Johnny has a little more humanity than his sister and tries to stop her when she thinks she is going too far with her cold methods, which is something laudable and that could be a good rope from where throw in a future for him to act correctly.

about the rhythm, Sean McGuire It begins with some balanced beats and then goes in crescendo until giving us the coup de grâce at the key moment, which makes the volume

On an artistic level, Ig Guara does a fantastic job of representing the world of Ghost Spider, so the background design continues to feel different from 616 and at the same time very characteristic, and the character design is quite remarkable and excellent at times, providing a good dynamism, details that make us pale because of how well placed they are and facial and body expressions that often leave us impressed by how they humanize the characters. In addition, his collaborative work during a chapter with Rosi Kampe serves the volume as a whole, since the cartoonist is in charge of necessary, remarkable parts, and that end up giving an equal result, which does not make it seem that we are facing two very different styles in such an obvious way, which is something that usually annoys readers and more in the same chapter.

In short, this is an excellent stage closing volume that makes us feel many emotions and makes us hope that the next Ghost-Spider collection that follows the plot will continue to leave us with that emotion that characterizes it.

• Gwen enjoying her two lives, if only for a while.
• The twist of the Storm brothers, especially Sue.
• Ghost-Spider demonstrating what it is to be a superhero, regardless of CUNA’s ideas.

• Not seeing the repercussions of the Jackal as a member of the Werewolf Gang, which we saw in the previous issue and there might be some effect here.

A remarkable and great closure of the stage that will not leave anyone indifferent.

You rate: Be the first one!