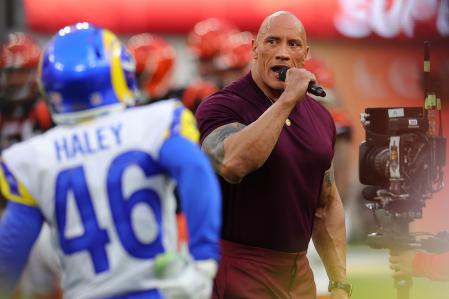 It is the most anticipated sporting event at the beginning of the year, and it is not for less, because the final of the National Football League (NFL) cup, the Super Bowl, which this year has been played between the Los Angeles Rams and the Cincinnati Bengals; It is a show that manages to keep not only the United States on edge, but also a large part of the international public, who eagerly await the meeting and the performances that enliven the event before, during and after.

A festival of sports, music and creativity that nobody wants to miss, neither the spectators from their homes nor the lucky ones who got a ticket to experience it in person from the SoFi Stadium, in Inglewood (California). Many fans of American football, among whom were many famous people. We tell you who was present to see how the Los Angeles Rams took the victory after a movie comeback.

If anyone knows how to win over a crowd, it’s Dwayne ‘The Rock’ Johnson. The actor displayed his usual charisma and, as in his best days in WWE, he knew how to put the public in the pocket with his fantastic presentation of the event with an emotional speech before the start of the match.

Prince Harry and Princess Eugenie in the house at #SBLVI pic.twitter.com/uKyIdqIFmE

The Super Bowl also caused an unexpected reunion for the English royal family: that of Prince Harry with his cousin, Princess Eugenie, daughter of Prince Andrew and Sarah Ferguson; who traveled to the United States to enjoy the event with his cousin.

The singer Justin Bieber and his wife, the model Hailey Baldwin, did not want to miss the massive event. In a box practically at the foot of the track, the singer intensely experienced both the game and the applauded halftime show, proving once again that he is an unconditional fan of Eminem.

Another video of Justin Bieber singing Eminem’s “Lose Yourself” at the #HalfTimeShow of the #SuperBowl 🔥pic.twitter.com/3KfLbpZIkW

Accompanying the Biebers was one of their best friends, supermodel Kendall Jenner, Kim Kardashian’s sister, who turned the event into a double date by being accompanied by her partner, basketball player Devin Booker.

Kanye West and his older children

Ellen DeGeneres and Portia De Rossi did not hesitate to attend the game. The 64-year-old presenter and his 49-year-old wife went to the stadium, where they were able to remember that ad they starred in a few years ago on the occasion of the sporting event.

Caught by chance, the singer Drake could also be seen going completely unnoticed in one of the boxes, where he stayed to watch the match.

Who also wanted to go unnoticed was the singer Shawn Mendes, who went to watch the game alone, although once at the stadium he was seen with his great friend Niall Horan, singer and former member of one direction.

The South African actress Charlize Theron did not want to miss the great sporting event either, although she tried to go unnoticed wearing a cap, her hair up and sunglasses.

Rebel Wilson showed up to the event fully equipped for the moment, wearing a Los Angeles Rams jersey and carrying a football under her arm. The Australian actress drew attention to her new look, with which she is happy after losing no less than 35 kilos of weight to improve her health.

From Prince Harry to Kanye West and Justin Bieber: the celebrities who lived the Super Bowl live