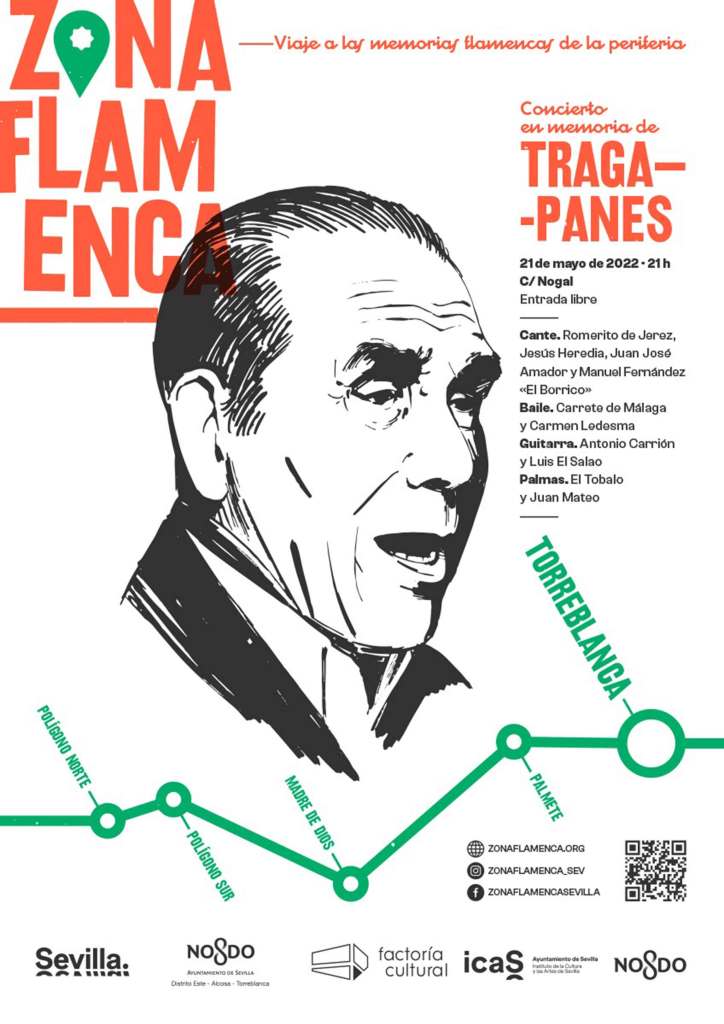 ‘Zona Flamenca’, an initiative promoted by the City Council of Seville through Factoría Cultural to bring culture to areas of social transformation, faces its final stretch with the last two concerts, which will be held on the 20th and 21st in Palmete and Torreblanca , respectively. The proposal, materialized in a series of free concerts, is part of the municipal strategy of bringing culture to all the city’s districts, as has also been done with major events such as the Seville Ancient Music Festival, the Flamenco Biennial , the Christmas program or ‘Summer in the City’, among others.

Through these shows, the initiative, which began on April 1, proposes to recover the memories of the periphery to extol figures in the history of flamenco from the second half of the 20th century belonging to the gypsy people and the working classes of Seville, which suffered the stigma and exodus from the historic neighborhoods of the city (Triana, San Bernardo, Macarena or Alameda) to others on the outskirts and, in this way, redefine the presence of the traditional flamenco repertoire in urban environments far removed from mythologies.

Specifically, the figures that have been recovered in the project correspond to a historical period that includes between the 40s and 80s of the last century and includes names such as Antonio Núñez Montoya ‘El Chocolate’, Pepa la Calzona, Carmen la del Titi, Bizco Amate or Tragapanes.

Two great figures for the end

After having passed through Polígono Norte (Plaza Río de Janeiro), Polígono Sur (Utopia Street) and Tres Barrios (Madre de Dios), Zona Flamenca now stops at Tres Barrios (Palmete) to pay tribute to Bizco Amate (Enrique Guillén Cascajosa) next Friday, May 20. Born in the neighborhood that gave him his name, he is an example not so much of the mobilization of the gypsies and the working classes from the center to the periphery, but from the periphery to the center and back. His fandangos are testimony to his radical political commitment, which led him to sleep more than one night in jail, and his way of singing them created a school in Seville.

Figures such as the bailaora Asunción Pérez ‘Choni’, or the cantaores El Turry and Manuel Gerena will take part in this show in his memory. On guitar will be Granada-born Manuel Campos, a regular accompanist for cante and baile figures Estrella Morente or Antonio Carbonell. Closing the poster are the audiovisual creators Los Voluble, present with their pieces at events as notable as the Bienal de Flamenco, and the cantaora Alicia Acuña.

The last of the shows will take place the following day with José Rodríguez Lara ‘Tragapanes’ as the protagonist. On this occasion, the stage moves to Torreblanca, which will host a recital in memory of this singer linked to the great families of singers and bullfighters from Triana, such as the Caganchos, and who achieved great visibility with Triana Pura.

A concert with a lot of art

This concert will bring together cante figures who have reached a certain age but are still active and have much to offer. They are artists from Seville, Jerez and Malaga, among whom are the singers Romerito de Jerez, noted for his facet as a flamenco singer; Jesús Heredia, who has devoted practically all of his cante to the accompaniment of baile, although he also has an extensive discography; Juan José Amador, born into one of the oldest gypsy families in Triana (the Amadors); and Manuel Fernández ‘El Borrico’, descendant of the family that has given more artists to Jerez, the Fernández Rincones.

At the dance there will be one of the living legends of flamenco, Carrete de Málaga, who at 82 years old has just fulfilled his dream of dancing in New York; and Carmen Ledesma, one of the most renowned teachers and performers of the Sevillian bailaora school. They will be accompanied by the guitars of Antonio Carrión, one of the accompaniment guitarists most requested by the leading figures of cante jondo in recent years; and Luis El Salao, who has played for names like La Tana, Rancapino, Juan Villar, Duquende or Carmen Ledesma, among others. The palms of El Tobalo and Juan Mateo will complete the picture.