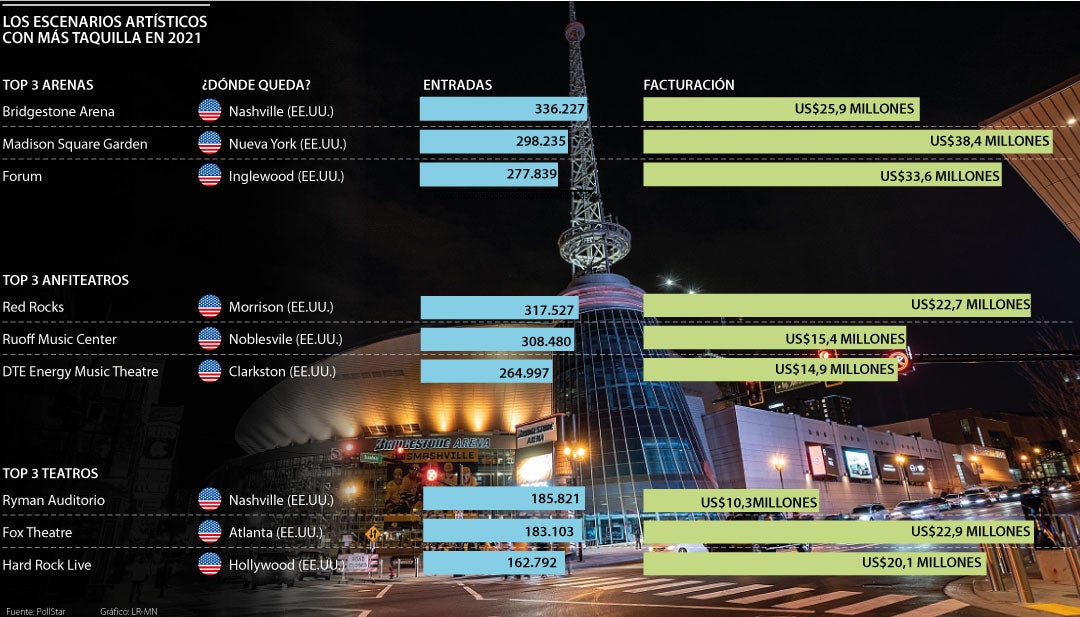 Live shows returned (or even surpassed) to the fury of the pre-pandemicand in that journey, some locations around the world have stood out more than others, reaching billings above US$38 million, according to PollStar figures.

In the case of venues, the Bridgeston Arena, located in Nashville, USA, was the one with the highest box office last year: 336,227, which represented more than US$25.9 million.

This year, the place has a tight schedule and expects performances by various artists such as Bon Jovi on April 30; Megadeth & Lamb of God on May 6; Justin Bieber on May 18; OneRepublic on July 13; Pepe Aguilar on August 7, among others.

Luz Ángela Castro, director of Ocesa Colombia, explains that when putting on a live show, not only the artist influences, but also the entire environment, with which “infrastructure makes it easier to build experiences and make productions with certain standards feasible. “, He says.

With what a good stage, although it is not directly related to the quality of the show, it will allow producers and artists to incorporate more elements, such as scenery, lights or projections, to amaze the audience.

The iconic Madison Square Garden in New York is another arena on the list with 298,235 tickets sold and US$38.4 million billed in 2021 (see graph).

For the remainder of 2022, its programming ranges from opera to reggaeton, with performances by Billy Joel on May 14; The Who on May 26; Big Time Rush on June 30; Twenty One Pilots on August 23; Ben Platt on September 27; Wisin y Yandel on October 8 and Andrea Bocelli on December 14, among others.

In Inglewood, USA the KIA Forum is the third highest grossing arena in the world for last year. The place managed to raise US$36.6 million with the sale of 277,839 tickets. This year will be the scene of Maná; Robert Carlos; Camila & Sin Bandera; Bleachers; Justin Bieber and Daddy Yankee, among others.

But what should a cultural space have to attract artists and fans? Francisco Martínez, general manager of Architecture and Concrete, says that worldwide, these places always have “a spectacular infrastructure that draws attention and becomes a benchmark in the city.”

That characteristic is fulfilled, without a doubt, by the Red Rocks amphitheater located in Morrison, Colorado (USA). Although this space is partly the work of nature, it has the ingenuity of the architect Burnham Hoyt and more than five years of work, until its inauguration in 1941.

Suitable for cultural events and with a capacity of 9,545 people, this rocky structure offers unique and memorable acoustics, which have been used for both concerts and live recordings.

Among the artists and groups that have played there are The Beatles, Jimi Hendrix and Neil Young. In 2021, it sold 317,527 tickets for US$22.7 million.

Also on the list is the Ruoff Music Center, which sold 308,480 tickets for $15.4 million, and the DTE Energy Music Theater, with $14.9 million and 264,997 tickets. The latter awaits the performances of The Lumineers on June 10; Train on July 12; Pitbull on August 31 and Five Finger Death Punch on October 5.

Finally, when reviewing the stadiums, the Rayman Auditorium takes first place with 185,821 tickets; the Fox Theater follows with 183,103 and Hard Rock Live closes the top three with 161,792 and US$20.1 million.

The public and the artist are the focus behind each live show
Despite the fact that the same locations can receive artists of all kinds, the requirements for each show are always different depending, mainly, on the target audience, the musical proposal and what you want to transmit.

“It is different to do an electronic music show aimed at an audience of 18 years on average, in which even getting wet is part of the plan and for no reason sitting down would be an option, to an event for adult audiences in which comfort and counting with a chair it is necessary”, specifies the director of Ocesa Colombia, Luz Ángela Castro.