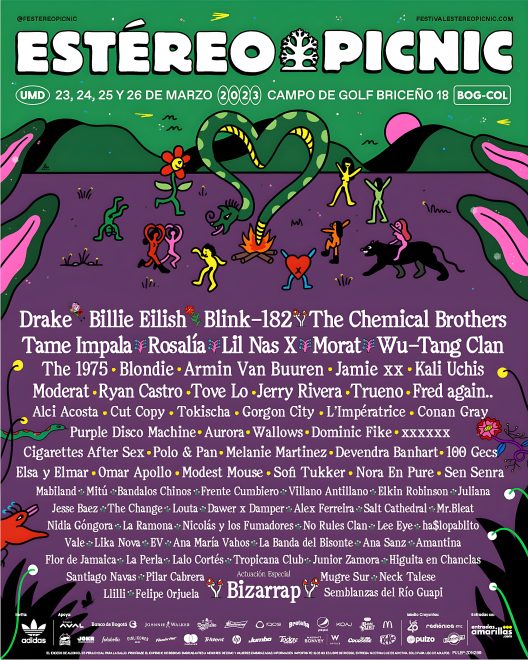 Advertise in El Planteo, the most read cannabis medium in the Spanish-speaking world.

Today we are different. Today we are the same. Today we celebrate that we are all different. The March 23, 24, 25 and 26 the Briceño 18 Golf Course will receive the twelfth edition of the Stereo Picnic Festival with one of the best festival lineups of 2023: Drake, Billie Eilish, Blink-182, The Chemical Brothers, Wu-Tang Clan, Rosalía, Tame Impala, Blondie, The 1975, Morat, Kali Uchis, Moderat, Bizarrap, Lil Nas X and other protagonists of #FEP2023. All together in the definitive liberation of our hearts.

More than 110,000 people enjoyed the FEP Comeback and now there will be many calls to live an extra day in A Different World. Thousands of freed hearts will celebrate with the continent’s hottest headliners list. Drake, the biggest artist of the 2010s, arrives riding the crest of a career that has cultivated multiple Grammy Awards, billions of streams across every possible channel, and an indelible mark on 21st century pop culture. Billie Eilish, the brightest diamond of the Zillennials: seven Grammy Awards, two Guinness Records, an Oscar, a Golden Globe and the adoration of the entire planet. Blink-182 with the unexpected, the original lineup in full: Tom DeLonge, Travis Barker and Mark Hoppus; punk rock as the soundtrack of the turn of the millennium, as the leitmotif of the Y2K generation, humor as a concept in a sound that thousands tried to copy but that no one could match. The Chemical Brothers: in 2020 we had them and in 2023 we will live them; one of the electronic cornerstones of the last 30 years will give us one of the wildest shows of our lives. Rosalía:´Tamo Worldwide with machete, blue flowers and carats; Rosalía Vila Tobella is going to be at the Festival Estéreo Picnic 2023. Because we look forward to your visit, Wu-Tang Clan: hands in the air, forming a W, singing “Wu Tang Clan Ain’t Nuttin ta Fuck Wit” and celebrating 30 years of Enter the Wu-Tang (36 Chambers). Along with these names, another half dozen headliners complete this cardiac release.

In the largest lineup in the twelve editions in the history of the Festival, more than 90 artists and groups will perform. Legendary and EFF-exclusive acts like Blondie and Moderat. A selection of the most exquisite of the Argentine street such as Bizarrap, Trueno and Louta. Hip hop of all flavors with Drake, Lil Nas X, Wu-Tang Clan, No Rules Clan, Ha$lopablito or Lee Eye. Pop avant-garde in the voices of Billie Eilish, Kali Uchis, Rosalía, Morat, Dominc Fike, Tove Lo, Melanie Martínez, Omar Apollo, The 1975, Elsa and Elmar, Juliana and Mabiland. Intense perreo with Ryan Castro, Tokischa, Jesse Báez, Dawer x Damper or Villano Antillano. Electronic delights for the dance, the heart and the neurons in the hands of The Chemical Brothers, Jamie xx, Cut Copy, Armin Van Buuren, Purple Disco Machine, Mitú, Fred again… or Polo & Pan. Rock of all cuts like Blink-182, Tame Impala, Modest Mouse, Devendra Banhart, Wallows, Nicolás y los Fumadores, La Ramona, Lika Nova, Cigarettes After Sex or Alex Ferreira. Great Latin artists like Jerry Rivera, Frente Cumbiero, Bandalos Chinos, La Banda del Bisonte or Mr. Bleat. And after seeing Grupo Niche and El Binomio de Oro on stage, the Colombian legend at #FEP2023 will be the maestro Alci Acosta. In short, the guests confirmed to the celebration of our times.

Oscars, Rock&Roll Hall of Fame, Grammys records, hymns in all languages, a journey through the sound hearts of dozens of thousands of inhabitants of a different world. This time, the Estéreo Picnic Festival will be bigger than ever, for four days and nights where the we will all be different.

#ExperiencesAval, the entertainment platform of Bancos Aval: (Bogotá, Occidente, Popular, Av Villas) and Dale!, celebrates eight years of commitment to the FEP and reaffirms its support for promoting culture in the country by announcing today the Exclusive pre-sale of Combos 4 Days (j,v,syd) and Combos 3 Days (v, syd) for your clients, from this moment and until October 13 at 8:59 AMbuying tickets at TicketsYellow.com. The general sale will be from October 13 9:00 AM. Soon more information about Piggy Banks, international sales and daily lineup.

All about Estereo Picic 2023 in Bogotá, Colombia

When is Estereo Picnic Bogota?

Where is Estereo Picnic Colombia?

How are tickets purchased?

Estereo Picnic Festival 2023 in Bogotá: When, Where, Tickets, Headliners and More | The Planting