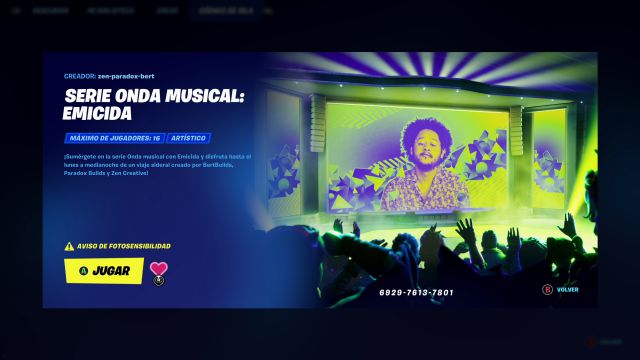 The concert from emicidal in Fortnitewhich is part of the series music wavewill hold its first session on Saturday April 30, 2022. Just below we tell you what are the dates, Schedule Y how to watch live new event of the Season 2 from Fortnite Chapter 3:

When is the Emicida concert in Fortnite?

The first session of Emicida Musical Wave concert in Fortnite will take place on Saturday April 30, 2022 at 00:00 CEST. Just below we leave you a list with the dates and times for several Spanish-speaking countries:

The Emicida concert will be held continuously for 72 hours after the start of the first broadcast, so you should not worry if for some reason you cannot attend the first concert. All sessions will be the same, with the same songs in the same order.

How to watch the Emicida concert in Fortnite

To see Emicida’s concert inside the game, we will have to enter the game mode “MUSIC WAVE SERIES: EMICIDA” (or enter the island code 6929-7613-7801 starting Saturday, April 30, 2022 at 00:00 CEST). If you can’t make it in time to witness the first session of the concert, don’t worry: this playlist will play the concert uninterruptedly for 72 hours.

At the same time on the same day, the “Triumphant” gesturefrom Emicide:

Epic Games reminds us that Emicida is just one more in the list of several invited artists for the concert series of Music Wave in Fortnite. After their event, from April 30 to May 3, 2022, and dates yet to be confirmed, other artists such as Gen Hoshinoproducer and Japanese pop star, and Franco-Malian singer Aya Nakamura.

The Musical Wave concerts are part of a series of festive and musical Fortnite collaborations. In our complete Fortnite Battle Royale guide we talk about more game techniques, such as which weapon is better, or how to complete all the missions.

Emicida concert in Fortnite (Musical Wave): dates, times and how to watch it live