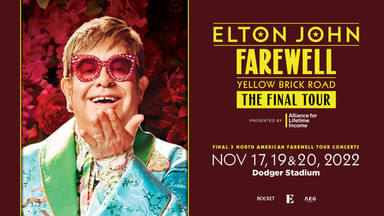 Elton John will say goodbye to the United States with a concert that will be broadcast live on Disney+. In addition, the show will be completed with content from the documentary “Goodbye Yellow Brick Road: The Final Elton John Performances and The Years That Made His Legend” that will come from the hand of R. J. Cutler, nominated for the American Film Academy Award, and the director David Furnish. The official documentary Elton John It will be made up of unpublished images of the musician’s concerts during the last 50 years, handwritten diaries and current material from him and his family. After passing through various festivals and a limited theatrical release, the film will be available exclusively at Disney+.

The broadcast of the concert

Let us remember that after those three concerts at Dodger Stadium in Los Angeles (USA), and the broadcast of the last one (November 20), Elton John will continue with its international tour and months later arriving in Stockholm (Sweden) as the last stop on July 8, 2023. From there, his live break would come to, as always, continue working on music, his life.

“Goodbye Yellow Brick Road: The Final Elton John Performances and The Years That Made His Legend”

Based on the tour “Farewell Yellow Brick Road Tour” by Elton John, the documentary feature film chronicles the final months of Elton John’s tour culminating in what will be one of the best farewells in rock and roll history. As we indicated, this is John’s last North American concert that he will place in the Dodger Stadium next November. The film will also recapture the first five years of John’s career when, between 1970 and 1975, he released his 10 iconic albums, seven of which reached #1 on the Billboard chart, making him a worldwide phenomenon.

“There are not enough words to describe Elton John and his impact on music and culture. It can only be said that he has no rival”, assures Bob Chapek, CEO of The Walt Disney Company. “Like Disney stories, Elton’s music has universal appeal and the ability to connect with audiences on a deeply personal level. Elton John has been a member of the Disney family since 1994 when he helped make ‘The Lion King’ an instant classic, so we’re thrilled to collaborate with him on this new documentary.”.

“Goodbye Yellow Brick Road: The Final Elton John Performances and The Years That Made His Legend” will bring together exclusive new interviews and clips from performances at Madison Square Garden, London and other concert venues. The documentary is the definitive portrait of one of the most successful musical artists of all time who has inspired several generations of audiences and musicians.

In addition to directing R. J. Cutler will also produce the film with his company, This Machine Filmworks, as well as David Furnish, with the company next to Elton John, Rocket Entertainment. Trevor Smith will also serve as producer. John Battsek, Jane Cha Cutler and Elise Pearlstein join as executive producers.

R. J. Cutler ensures that “As for many, the music of Elton John has had an important meaning for me for decades. So the opportunity to make this documentary represents a milestone and a privilege in my career.“.

Let us remember that this director, RJ Cutler, is an award-winning filmmaker and author of some of the most important documentaries and television series of the last quarter century. Thus, we point out that he is the director, producer and screenwriter of the documentary feature film “Billie Eilish: The World’s a Little Blurry”, nominated for four Emmys and shortlisted for an Oscar. His other documentaries include Critics’ Choice Award-nominated “BELUSHI,” Oscar-nominated “The War Room,” Emmy-nominated “A Perfect Candidate,” Sundance Award-winning “Vogue September Issue,” “Listen to Me Peabody Award-winning and Oscar runner-up Marlon,” Grierson Award-winning “Thin,” and “The World According to Dick Cheney.”