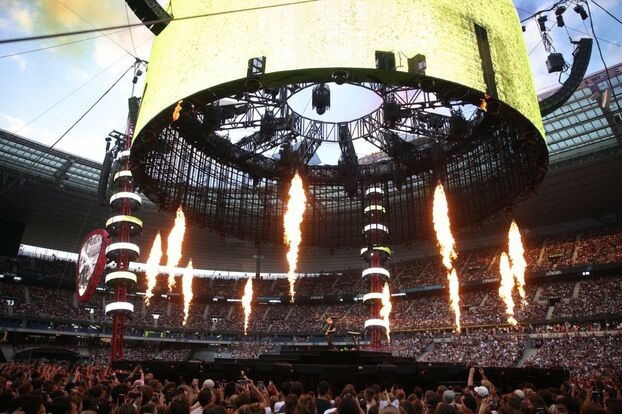 Arms outstretched, eyes fixed on red and golden fireworks piercing the sky, Ed Sheeran greets the spectators at the Stade de France: “Vive la France! he shouts. It is 10:30 p.m. this Friday, July 29 and a few moments earlier, the 31-year-old English singer chained his hits “Shape On You” and “Bad Habits”.

Between the two, the circular screen that crowned the stage like a giant lampshade descended to the ground. When he got up, the public discovered the star wearing the blue jersey of the French football team. Ed Sheeran grabbed a tricolor held out by a spectator and waved it before carrying it in a sling, triggering howls from the crowd.

A guitar and a loop pedal

” It was really great ! enthuses Lauriane, 27, leaving her seat. Coming from Marseille with her mother Christine, 63, the pretty brunette loved “the lights, the choice of music and the atmosphere”. 49-year-old Italian Biagio was impressed by the “scenography”, while Tessie, 20, whose artist is “the favorite singer”, found his idol “dazzling”. Like Alizée, 34, and Priscilla, 35, who made the trip from Bordeaux and La Rochelle, most spectators highlight the performance of Ed Sheeran, who held the stadium “all alone”, almost without musicians.

In the middle of a scene in the form of a disc which turns on itself, the Briton was indeed accompanied only by his guitar and the loops of music which he recorded live with a pedal. During a single song, we saw musicians on the screens, installed on side stages, but otherwise, the guitarist singer, who also writes for Justin Bieber, Taylor Swift, Robbie Williams or James Blunt, did indeed lead solo dance. And the man with fiery hair gradually raised the temperature of a concert that started at 8:30 p.m. in broad daylight in a thick heat.

All in black, flanked by a “PARIS” t-shirt, the singer paced the gigantic stage and urged his audience to applaud, give voice or turn on his mobile phone to illuminate the Stadium with a shower of glitter. On his hit “Shivers,” hands rose rhythmically into the pit like a throbbing heart. “It’s my biggest show in France,” said Ed Sheeran. And the singer says that when he started out, he thought the French weren’t interested in his music: “Here, I was singing in front of 100 people… In 2011, I played at La Cigale. Now it’s my best fanbase in the world. »

88,000 spectators according to the singer

As the screens projected animated images, the waltz of a couple or the lizard drawn on the forearm of Ed Sheeran (the singer is said to have more than a hundred tattoos), the center of the stage sometimes unfolded to form a cruciform staircase. During the very romantic “Perfect” – “my favorite song among all those that I wrote”, specified the artist – drawings of flowers climbed on the screens. Little by little, night fell and the public came alive. Until the electric reminder of “You Need Me, I Don’t Need You”… “It feels good to be at 80,000 and party, with people of all ages”, smiled Angelina, 15 years old and Noella, 41 years old.

After Coldplay’s 300,000 spectators (in four evenings at the Stade de France), Lady Gaga’s 76,000 (at the same place) and the Rolling Stones’ 60,000 (at the Longchamp racecourse), Ed Sheeran’s concert – which claimed “88,000 spectators” on stage – was added to the very fine musical line-up for the summer in Paris. And it’s not over: from this Saturday evening, the young Briton returns to the Stadium to wet the jersey again.

Ed Sheeran made the Stade de France vibrate solo: “It feels good to be at 80,000 and party”