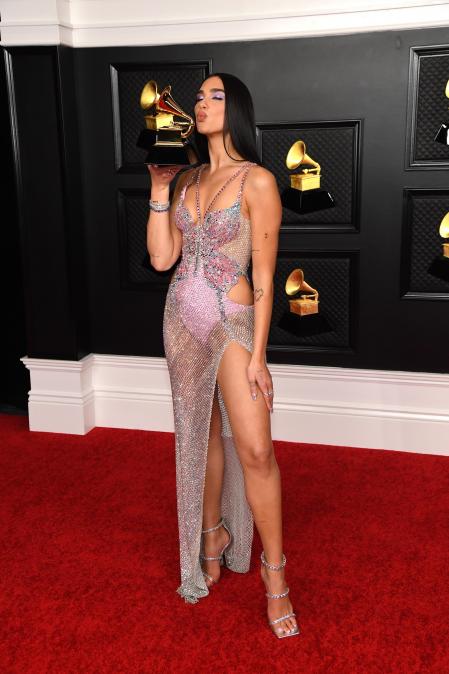 Dua Lipa is obsessed with butterflies. For more than a year, the singer has worn various designs with the insect as the protagonist. A nod to the aesthetic of the 2000s, known as the Y2K style, which was once worn by artists such as Mariah Carey or Christina Aguilera.

The British artist’s crush on butterflies began at the Grammy Awards in March 2021. The interpreter of Levitating appeared on the red carpet in a spectacular beaded Versace dress that drew attention to a large butterfly in different shades and a skirt with a side slit.

An impressive design that made her one of the best dressed of the night and with which she began this obsession that continues today. Recently Dua Lipa has launched the bathing season with a bikini that, how could it be otherwise, has the butterfly as its protagonist.

It has been the profile of Leslie Amon, the brand that signs the group, in charge of showing the new signing of the British on Instagram. The 26-year-old has debuted a white bikini top that incorporates the trendy straps that wrap around her abdomen and has a butterfly in the same shade in the center of it.

This top, which on the website has the name of britneycosts 107 euros and is still available from size XS (very few units left) to L. XL is no longer for sale. Dua Lipa combines it with a basic high-waisted panty, also with the same name, which is priced at 66 euros.

A set that could advance the trend of butterfly bikinis for this summer, a fashion in which the British is an expert. As we said at the beginning of the article, throughout this last year there have been several occasions in which the interpreter of loveagain has opted for dresses and tops with this insect as the star.

After hitting the Grammys, Dua Lipa celebrated her birthday in a new Versace dress, with sequins and an asymmetrical skirt, reminiscent of the design of the spring-summer 1999 collection that Naomi Campbell wore that year, at a party with Kate Moss.

Weeks later he wore for the first time a crop top asymmetrical in the shape of a butterfly, in pink and lilac tones, which confirmed this peculiar crush on this trend of the 2000s.

Another of his most commented styles was the total denim look from Blumarine’s spring-summer 2022 collection that, of course, had the butterfly on the top and on the pants, combined with a metallic belt with the same insect.

The same brand was the one that signed an original bubblegum pink two-piece that Dua Lipa wore to enjoy Adele’s concert in London. It consisted of a top with straps and a beaded butterfly in the center and a skirt with a side slit that also incorporated small embroidered butterflies.