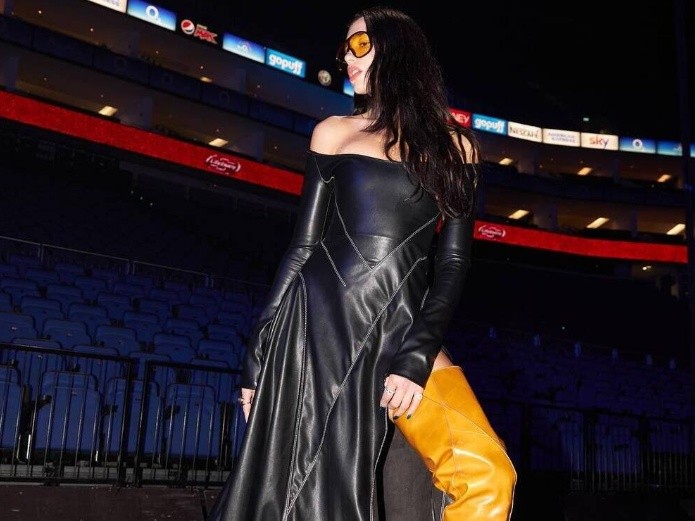 The successful singer Dua Lipa is working on her Future Nostalgia Toura tour that was accompanied by the second studio album that is under the same name, whose musical project came out in 2020 during the pandemic, so the tour had to be postponed due to the whole issue of confinement, however in As soon as the expected 2022 arrived, the 26-year-old artist started with the dates.

Being a success so far, seeing iconic scenes, then accompanied by a flirty wardrobe where the beautiful singer shines during the show, now, the album of Future Nostalgia apart from bringing us an international tour, Dua Lipa launched merchandise: sweatshirts, socks, key rings, caps, blouses, comfortable pants, thermos, bags, among other things.

So recently in the Instagram post, the British would be portrayed with one of the outfits that she took out with the merchandise of the album, being a black sweatshirt with a detail of a heart on the left side, in the middle is the name of the album in neon green letters.

You may also be interested in, Woman protests without her top on the red carpet Festival de Cannes

Now, on the back of the sweatshirt, is a list of some of the cities to which Dua Lipa included on his tour, the bottoms are black pants with the same heart motif but on one of the legs, in the same color.

The top, currently out of stock in her store for all sizes small, medium, large, extra-large, and extra-extra-large, sold for $175. While the pants have a cost of $130 dollars, since it is still available and in all the sizes mentioned above.

With five photographs the interpreter of “Don’t Start Now“, one of them with the model Rosie Amanda Viva, both are sitting embraced wearing their outfits for the camera and in the other four photos the singer is presumed alone.

Some of their merchandise also has necklaces with the word “sugarboo“, which is part of the iconic song of “levitating“in gold and the calligraphy a little in italics. Now, going back to the clothes, in other designs there are the t-shirts with the word”Physical“, which is also the name of another of the successful singles of Dua Lipa.

BY CLICKING HERE you can see the post of the singer.


Studying a degree in Secondary Education in the Spanish Area at the age of 21, venturing into the world of writing by entering Show News last March of this year, working on the writing of media notes for the shows with the purpose to entertain, at the same time as to inform the readers who follow the page. He is a lover of music and cinema, so writing about it is entertaining. Aiming to graduate to acquire a major in literature