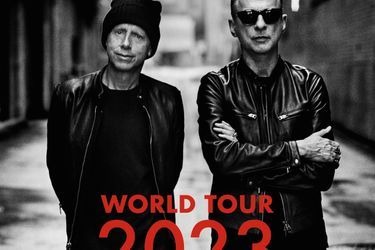 Now reduced to the Martin Gore-Dave Gahan duo, the English group has announced a new album and a stadium tour. The singer tells us what to expect.

1. What does Fletch’s passing change?

The announcement of Andrew Fletcher’s death on May 26 plunged Depeche Mode fans into an abyss of perplexity: could the group exist without one of its founding members? “We asked ourselves the question, admits Dave Gahan. But
we had already started recording our next album when we learned of his passing, and we felt we had to continue.” The disappearance of the musician was a shock especially for Martin Gore, to whom he was very close. “Fletch was Martin’s constant support,” notes Gahan. He was even sometimes his spokesperson within the collective. But he hadn’t been involved in the creative process for a long time. »

It’s a new era that opens for us

2. What will ‘Memento Mori’, the group’s next album, look like?

“We are an electro group”, recalled Dave Gahan during the Berlin press conference. “The record is almost finished,” he continues. There will be twelve songs, including three composed by me, and the album will be released in March. The title, “Memento mori” (“Remember that you are going to die”), was found by Martin Gore a month before the death of their accomplice.

“For Martin, this title is above all a celebration of life, which shows that you have to take full advantage of it as long as you are still here. This fifteenth album is the first entirely made for two. “It’s a new era that is opening up for us. But the important thing for me is to make music with Martin. Just coming to sing his songs would be pointless. No, I need to talk to him about my ideas, about my proposals. Even if he clearly explained to me that he wanted to remain the author of the majority of the compositions. »

We have a record to finish before preparing the tour

3. Why stadiums rather than arenas?

Let’s face it: if Depeche Mode impresses in 20,000-seat halls like Bercy, the group has often disappointed in the stadium, due to a scenography not suited to gigantism. The “Memento mori Tour” will first stop in America for ten dates
in arenas, before arriving on May 16 in Europe. “We have a disc to finish before preparing the tour”, explained Martin Gore in Berlin. “But Anton Corbijn is already working on proposals for visuals, images and videos. We will enter this process once the album is finished. » Dave Gahan, says that « I immerse myself, each time, in our discography to see what we could unearth. The new titles must mesh well with the old ones. There are songs, like “The Sun and the Rainfall”, that we haven’t played since the 1980s and that we could give a chance this time around. »

If only 42 concerts have been announced, it is already rumored that a second burst of dates, in theaters this time, is planned for 2024.

“No, a new one,” smiles Dave Gahan. Music makes me feel good. Doing it with someone is a source of comfort for me. I know how destructive success could have been for not measuring how lucky I am to still be there, to still live from music. For us, this duo step is interesting, because it pushes us to find another way of working. You will see, you will be surprised…”

On tour May 31 in Lyon (Groupama Stadium), June 22 in Lille (Pierre-Mauroy stadium), May 24 in Paris (Stade de France) and July 4 in Bordeaux (Matmut Atlantique).