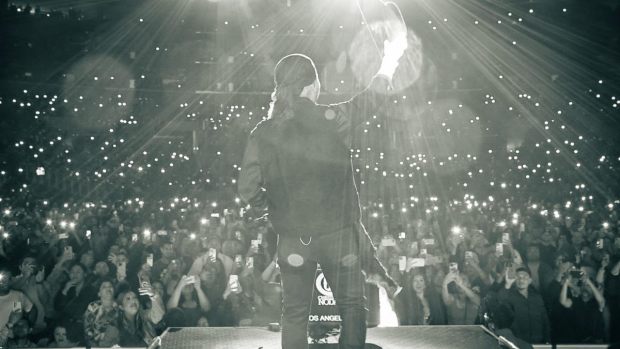 Christian Nodal captured the hearts of those present during his presentation at the Crypto Arena in Los Angeles, achieving a full attendance on Saturday, October 7 as part of his ‘Forajido Tour’.

A night where the public accompanied Nodal for 3 hours singing many of his hits such as “Ya No Somos Ni Seremos”, “Adiós Amor”, “De Los Besos Que Te Di”, among others,

And just before performing one of his greatest hits: “They didn’t tell you wrong”, Christian expressed himself with these words.

“Congratulations to the good human beings who did not take revenge, but I am going to tell you something that happened to me too and I took revenge, and you know what I told him? They didn’t tell you wrong, I’m not going to deny you, if we kiss, we give ourselves up, but that’s all, “she expressed using the lyrics of his song.

It would be with or without dedication to his previous relationship with Belinda, we don’t know, but Nodal continued until the end of the song with great emotion.

Dressed in black, boots and hat, with a charismatic smile he stole many sighs. Just as he was attentive to his audience signing autographs during the course of the concert, even giving away his hat that he threw into the crowd.

“My dream was to live from music and we passed that goal a long time ago and you have invited me to dream home once again to fulfill more dreams, thank you very much. The blessings that are in my life I owe to God and to all of you. Thank you for accompanying me my people for believing in me and for connecting with my melody and my lyrics, I love you very much”, said Nodal.

Christian Nodal continues to reap hits and ‘SOLD OUT’ shows with his ‘Forajido Tour’.

This past weekend he rocked California with three unforgettable concerts. It started in Ontario, followed by Los Angeles, and culminated in Sacramento.

This coming weekend he will be in Texas, on Friday October 14 in Hidalgo, on the 15th in San Antonio and on Sunday in Houston.

Born in Caborca, Sonora, Mexico, Christian Nodal is the fastest growing artist in the regional Mexican music genre, fusing the classic sounds of mariachi music with the accordion to create “mariacheño,” a term he himself coined.

To check the dates of upcoming concerts visit: ticketmaster.com