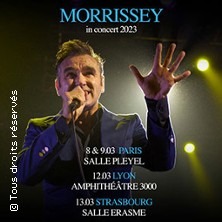 Founding member of The Smiths, Morrissey returns in 2023 for 4 exceptional dates

British singer-songwriter Morrissey has recorded 16 UK Top Ten albums, as well as 9 Top Ten albums with his former band The Smiths, of which Morrissey was a founding member. In the United States, Morrissey recorded two Top 10 albums and eight Top 20 albums. In 1991, Morrissey broke the Hollywood Bowl filler record held by the Beatles. In 2006, Morrissey was voted the second greatest living British icon by BBC viewers, ahead of Sir David Attenborough and Sir Paul McCartney. In 2007, Morrissey was voted “The Greatest Northern Male” in a poll conducted by a national newspaper. In 2012, Morrissey received the keys to the city of Tel Aviv. In 2013 Penguin Classics published Morrissey Autobiography which became the second best-selling autobiography in British history. The book spent six weeks at number 1, five weeks at number 2, four weeks at number 3, and is a continuing UK bestseller.
Morrissey’s songs have been covered by David Bowie, Nancy Sinatra, the Killers, Marianne Faithfull, Chrissie Hynde, My Chemical Romance, Thelma Houston, Christy Moore, among others. Morrissey was the lead singer and lyricist of The Smiths for 6 years and has been a successful solo artist for 35 years. In 1994, his album “Your Arsenal” was nominated for the Grammy Awards. Born in Manchester, England, Morrissey is of Irish parents and, more specifically, of Dublin lineage.

Morrissey, The smith…. If for the youngest, these names may not necessarily mean much, The Smiths were nevertheless one of the major rock groups of the 80s and had enormous success in the world. whole, especially in the United States where Morrissey is completely idolized. With 6 successful albums to their credit, the Smiths broke up in 1987 when Marr decided to leave, shortly after the release of their last album “Strangeways, here we come”. Morrissey then embarked on a solo career leaves an album in 1988 which will however not reach the success of Smiths. Between a lack of inspiration and conflicts with the former members of the group, he went through a difficult period from which he emerged in 92 when he obtained consecration with the rockabilly album “Your Arsenal” for which he surrounded himself with a new duo of guitarists: Boz Boorer and Alain Whyte. Driven by the hit I know it’s gonna happen someday the album allows the singer to taste glory again. “Vauxhall and I” released in 1994 prolongs the pleasure, but the commercial failures of “Southpaw Grammar” (1995) and “Maladjusted” (1996) plunge him into a new crossing of the desert which will last for many years. Based in Los Angeles , Morrissey finally made his comeback with “You are the Quarry” in 2004, undoubtedly one of his best albums to date, confirmed in the process by a live disc “Morrissey Live at Earls Court” (2005) and “Ringleader Of The Tormentors” his latest album released on April 4, 2006. Through songs that combine great sensitivity and witty cynicism that make him an icon, Morrissey marks an entire generation and leaves an imprint in the world. history of rock, still influencing groups of the current scene such as the Babyshambles, The Rakes, The Strokes, Oasis or Good Charlotte.