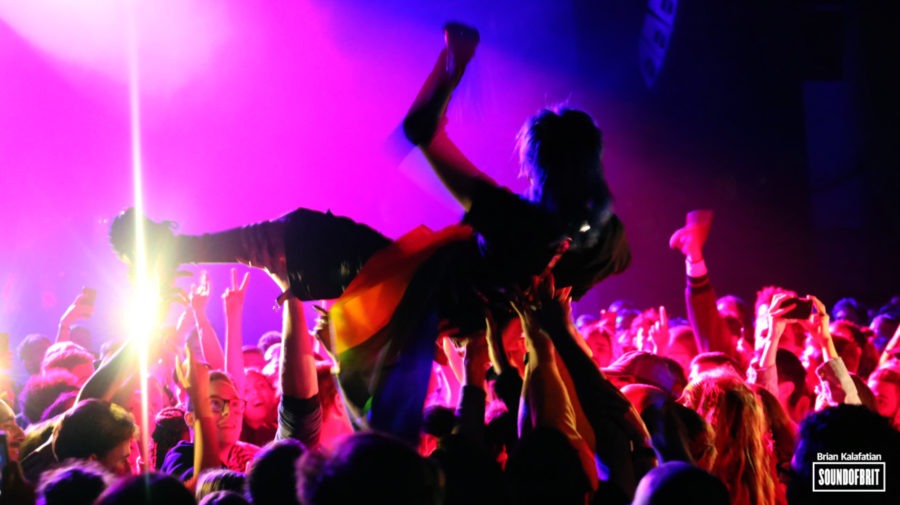 
Throwback to his headline concert at the Transbordeur on Sunday November 17th.

The announcement of the arrival of Charlie XCX in Lyon was somewhat surprising as the English singer is unfortunately not often in the provinces. This date at the Transbordeur follows his visit to Paris as part of the festival pitchforkwhich we tell you here.

We start the evening directly with a first part more than faithful to the new musical horizons of XCX. We discovered Dorian Electra, later called a “superstar” by Charli. The young American will have known very easily how to put the public in the pocket as his music is close enough to the last pieces of his host for one evening.

Not hesitating to jump into the pit to offer himself a more than successful crowdsurfing, he will proudly tackle an LGBT flag to win the hearts of many. Electra will even be entitled to a small crowd at the merchandising stand at the end of its promising concert.

The Charli XCX community continues to grow album after album. This has notably been demonstrated by leaving an ear trailing in the discussions of its Angels in the front rows: many were also present at the pitchfork. The lights go out at 9 p.m., and Charli’s voice rings out to get us in the mood, and tell us she’s going to take us to heaven.

Next Level Charliethe first title of his latest album Charlie that we loved, is launched. Hundreds of smartphones then rise to welcome the star of the evening. However, we are surprised to see only one press photographer in the crash… us. Rather surprising to think that other photographers did not move.

For 1h20, a pop wave will cover an almost complete Transbordeur. The last push Charlie will almost be played in full: 14 titles out of 15 in total. We were a little worried about the large presence of featured songs in the setlist, but XCX is not afraid to sing the verses of others, or else has been able to rearrange the original versions more than well.

Despite being in Hangover » (would she have taken a short break in Paris after her date in Cologne?), XCX takes her time to discuss with her audience, notably evoking the dangers of Instagram. In encouraging French, she obviously does not forget to tell us how much she loves us.

It was a real party from start to finish. We weren’t afraid from the beginning to release our most beautiful hip hop steps on Clickand to believe oneself at the wheel of a racing car on Vroom Vroom. Alas no Chris on Gone as was the case in pitchforkbut the Lyon public has very well replaced our national pride.

It didn’t take long for us to enter this proposed futuristic universe, with a huge cube right in the middle of the stage. The lights are ideally worked, and so well calibrated to the setlist. With glasses that she rarely left unfortunately, Charli ensures by her charisma and a flow that would make many pale.

Unlike her oldest tours such as Lollapalooza Paris in 2017, we find our Englishwoman now alone on stage, without any musicians. But she invests her space ideally, sometimes by dancing on the right as on the left, or by monopolizing the attention in the center with her microphone stand. On I Don’t Wanna Knowthe room will even sublimate with a multitude of lit flashes.

Some scene departures are notable, but to come back even better. One of his returns with the tricolor sparked a great fan reaction, floating in the air thanks to the installed fans. His favorite moment shake itwill then see the arrival of four people who will ignite the LGBTQ+ community (and not only!) present en masse this evening.

Boys, in a candy pink atmosphere, was one of the most successful. Indeed, the old tubes are not all set aside: the triangle It (I Love It, Unlock It, I Got It) will not miss the call. The fence on 1999 will even see about twenty people sitting on the shoulders of others. ” I’m Charli XCX, bitch” as if to remind us that we haven’t seen anyone on this Sunday evening.

We still regret the absence of the old Break the Rules or boom clap, but these shortcomings demonstrate all the great evolution of Charli. However, we dare to hope that for the festival tour we will find his monstrous hits with mura masa, Mr Oizo or David Guetta.