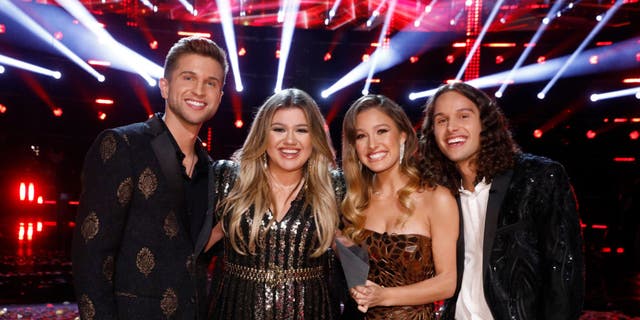 Camila Cabello will join the coaching panel and replace Kelly Clarkson in the fall for Season 22 of NBC’s popular singing competition “The Voice.”

The former Fifth Harmony member made her big reveal through song as she raised her head in a clip shared to Twitter, in which Gwen Stefani, Blake Shelton and John Legend were also confirmed to return to the show.

“Warmly welcome your vocal coaches,” the tweet read before tagging each vocal powerhouse in a duet video in which they sang Mika’s viral hit song “Grace Kelly,” which recently made a resurgence thanks to TikTok.

Camila Cabello will join the coaching panel and replace Kelly Clarkson in the fall for Season 22 of NBC’s popular singing competition, “The Voice.” The former Fifth Harmony member was seen at Variety’s Power Of Young Hollywood in 2019.
(Morgan Lieberman/FilmMagic via Getty Images)

In the social share, Stefani rocked a colorful tie-dye sweatshirt with jeans, while Legend and Shelton tuned in to sing the song from 2007 album Life in Cartoon Motion by Mika with Cabello for NBC. a big announcement.

Another announcement on Twitter showed the stars’ names in bold white type with the famous red chairs seated in the background.

Clarkson previously coached for eight seasons and won four times, most recently in season 21 with the act, Girl Named Tom.

Additionally, she finalized a bitter divorce from ex-husband Brandon Blackstock after seven years of marriage. The former couple have two children together.

This isn’t the first time Cabello has seen ‘The Voice’ stage, as she previously served as an advisor alongside John Legend’s team last season.

“Camila has all the experience she needs to be the perfect advisor for our team. She once entered a singing contest and did really well,” Legend told Extra at the time.

“She was in a band, and in this battle setting, where performers fight in pairs, that’s a very important skill to have.”

He added: “And obviously she’s an incredibly successful artist and performer in her own right, and everything she’s learned over these years is going to be so important to our team.”

Cabello is no stranger to reality TV competitions and debuted with girl group Fifth Harmony on X-Factor in 2012. At the time, the group also included Ally Brooke, Normani, Dinah Jane and Lauren Jauregui. .

While they placed third on the show and found commercial success, the women later went their separate ways and continued their solo endeavors after Cabello left the group in 2016.

“I wouldn’t be where I am today if I hadn’t auditioned for a show like this,” Cabello said on “The Voice” last season. “It really gives people an opportunity, which I find so amazing, so beautiful.”