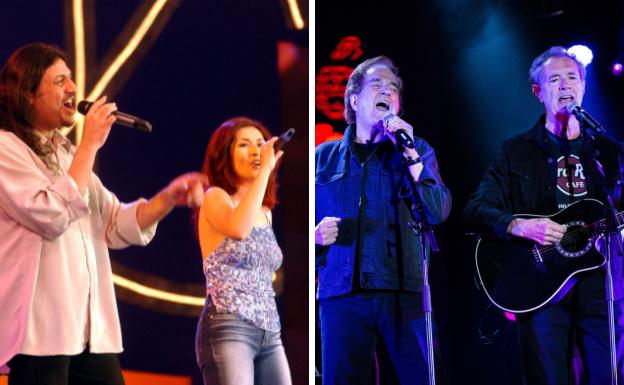 Camela and the Dynamic Duo, in concert. / CE

Sestao will celebrate San Pedro again after two consecutive years of cancellation due to the pandemic. The program of activities will last from June 23 to July 3; will therefore be eleven days of fun to recover the joy lost in recent times. Both the Culture area and the groups that make up the Festival Committee have put all their enthusiasm into preparing the festive program that was presented this Tuesday at a press conference together with the poster that will announce the festivities.

The last time that the residents of Sestao enjoyed the San Pedro festivities was in the summer of 2019. «In 2021, a small alternative program of activities was organized in the Plaza del Kasko, keeping the sanitary measures that were in force in that moment, but now the celebrations are back in full”, explained Ainhoa ​​Basabe, mayor of the municipality.

The current situation does allow the festivities to be recovered with their traditional essence, and with the new normality the barracks, the txosnas venue, the crews, the concerts, the children’s activities, the Bilbao dances, the carrefocs and the famous fire bulls among others will return. Other events. In total, the neighbors will have about a hundred activities.

Within the musical section, this year Sestao will offer a poster for all audiences, with relevant groups and a careful staging. Thus, bands such as Camela (June 28), Dvicio (June 30), Huntza (July 1), Dúo Dinámico (July 2), El Mentón de Fogarty (June 24) and a pilgrimage with Korrontzi and groups from Sestao (June 23), to name a few of the musical performances that are already guaranteed.

For all these acts there will be a central stage in the Plaza del Kasko, where the big concerts will take place. There will also be an additional one in Plaza San Pedro, intended for street theater and smaller performances, and a last one at the Begoñako Andra Mari school.

There are no parties worth their salt without town criers. On this occasion, the entity that will have the honor of reading the proclamation will be AFISES in recognition of its long history, the mayor has announced. It is an association that has spent years contributing to the visibility and improvement of the quality of life of people with functional diversity.

«After so much time we all want to recover the illusion, the joy and the desire to have fun. For this we are now finishing closing a diverse program, with the aim of enjoying our sanpedros again, which will be made public the week before the holidays, ”said the councilor and the councilor for Culture, Eduardo Abad.

During her speech, the mayor also wanted to mention and condemn the sexist aggression that took place last weekend during the Ortuella festivities. “We hope that the tragic events that have occurred recently will not happen again in the celebrations of any of the municipalities. Hopefully it will be the last of these cases that women are suffering, “said Basabe.

Eduardo Abad, Councilor for Culture, and Ainhoa ​​Basabe, Mayor of Sestao, pose next to the festival poster /


In the same way, the San Pedro festivities already have an advertising poster whose author is Ricardo Del Rio Serrano, from Sestao, winner of the contest organized by the Culture area. The jury’s decision was unanimous and the work has different festive elements from Sestao represented. “It gives off joy, which is what we need right now,” Abad commented.

To conclude, the mayor of Culture has wanted to appeal to tranquility to be able to have fun during the celebrations but without affecting the neighbors. “We know that there are concerts in which we will receive people from outside, but we will try to prioritize people from the municipality. We want these parties to be enjoyed and to be enjoyed », he has expressed.

Camela and the Dynamic Duo, between the concerts for the Sestao festivities