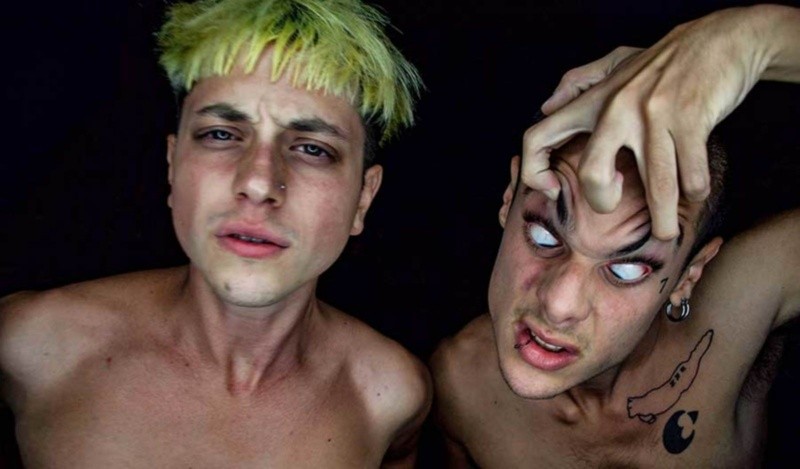 Is named Catriel Guerrero, even though everyone knows him Ca7riel. The 27-year-old artist, one of the most representative artists on the scene in our country, spoke with Jules Leiva for a new edition of black box.

His passion for music was born thanks to the family barbecues, where he played the guitar with his father. At the age of 6, she met Ulysses Warriorknown as Paco Loving, with whom he established a friendship beyond the four walls of the school.

“Paquito and I, two little sprouts. I remember the very intelligent guy, very intelligent Paquito, he knew all the neighborhoods, all the accounts, in the first year when the teacher made you come in to demonstrate your skills and I didn’t. He was a boy who already had a street, the guachín knew where the subways sent you, he knew everything, I imagine so much that he accompanied his mother to work. At that age I used to climb it, she shook it, she was a real climbing boy, “she recalls.

His path continued on Juan Pedro Esnaola School of Musicwhere he learned classical music, which defined it as the closest thing to Hogwarts, in reference to the movie “Harry Potter”.

“It was national holidays and we kids took over the patio and that day there were very few classes, and we played in the patio, we took out the drums, we all organized ourselves so that everything sounds, so that it is plugged in, so there was a thing of great union between musicians and little tiny artists and we grew up in that. The street was given to me by the schoolyard”said the artist.

Together with Paco Amoroso they formed the band Astor, which combined progressive rock, funk and reggae. It was in force for seven years, and in 2017 they presented their EP “Holidays all year.”

“I wanted to have a drummer, and everyone played the drums at my school, but I wanted a friend of mine to break it up and I sat Paquito on the drums and he started, he was bad bad until he started getting into it and he was great at the months and we became the band and we all learned together. Something that I learned much later from Paquito is to speak the language of trap, he writes very well and his head is not a bard when it comes to writing, so in that we are the yin and the yan. I am a bard to write, not now, but because I learned it from him”, he confesses.

Among his great references that marked his path, as he confesses, is Luis Alberto Spinetta: “I know entire Spinetta songs on the guitar, but I don’t know any song, any lyrics, because what was happening musically represented me terribly, because it’s all very difficult and I was a very nerdy music kid, so that I was interested in playing it, but I didn’t understand the lyrics, they didn’t represent me”.

To date, released the album “Cve7e” and the EPs “Povre”, “Livre”. Along with Paco, he published songs that became hits, such as “Not Me”, “Jala Jala”, “Ouke”, “Ola Mina XD”, “My Shadow” and “Ice Cone”. Last year they appeared at the Works Stadium, show that is now available on Youtube.

How was the idea of ​​singing together in a duo born? “I was on the terrace of my house in Nazca, avenue, quilombo, I remember that Paquito looked me in the face and said ‘I know all your songs, you are alone on stage, it would be better if there were two people’, and I was very excited because suddenly Paquito appeared, he vibrated and he threw that at me. I started throwing some props, we locked ourselves in a studio, the mattress of my house with the computer on the floor, we did a song and it broke it to another level, and That’s when the guy decides to set himself on fire and break it. There everything happened naturally, the guy caught fire, I was on fire, and we were just together, and we burned all the things that were around as we went and it was great, “he says. .

As for criticism or opinion on social networks, he comments: “The ‘cringe’, those things that give you an impression, is in fashion, it’s trending. That’s why tiktok exists and we’re all opening tiktok and out there laughing at beings that simply are. So, what about us, are we scoundrels? Better, if we anger him, better because that’s art, art causes things, happiness, anguish, anger. That’s art, provoking things and we’re not ashamed of anything.”

The artists were invited to participate in a tribute to Gustavo Cerati in it Colon Theaterwhere they performed the theme “Crime” along with an orchestra and an incredible staging. You can relive that moment here.

“I was upset about entering the Colón, I think I have rarely been so afraid of a stage. I’m not afraid of almost anything, I’m very afraid of heights and being in the Colón. It’s something I would revive because it was a tribute to Cerati, the entire Cerati family was watching in the front row, we had to sing ‘Crimen’ with a fucking orchestra. They had made a preparation for us to enter and that things were going to be that way. As soon as we set foot on the stage, Colón fell down and destabilized me and made me even more afraid, but it’s good to feel afraid because it makes you do things that you might not want to do, jump into the pool, and I love it jump into the pool,” he confessed.

In the case of Ca7riel, he also participated together with Fito Paez on his new album. “Fatal photo re confite with Fito”, said the young man on Instagram, who was one of the guests along with Lali Esposito, Hernán “Bad Fame” Coronel and Mateo Sujatovich.

“My mother, when she sees that Fito endorses me, or that ill fame what is coming Juana Molinoh choose to do a song with me or just be, my mom says ‘ah, my son is doing things right’, even though I don’t see him that much. I’m really good, I don’t mess around at all,” she says.

In addition, the artist accompanied wow with the guitar: “I met him shooting freestyle, he was always Wosito, I was there doing what I could, but I was bankrupt. There with Wosito he was tremendous in one and one day he needed a guitarist or someone to help him do songs, because he’s a freestyler, he’s the best at that. And he contacted me, told me to get together to do things and I don’t know what happened, but I ended up producing a song for him, although I didn’t produce anything for him, I just put the microphone in front of him, I told him ‘this is the autotune’, you can shout and it will be good, you will never go out of tune, “he said.

“The same is the Wos, it always was. ‘Caravana’ is a classic of Argentine music, I feel like a godfather of that album. I was there inflating the eggs there while they were recording. They are so good, they ride the wave so well that I was just surfing behind them. It’s a classic because it’s in the DNA of millions of people in Argentina, when music gets into the DNA of a people it’s a classic, a classic of Argentine rock. You don’t even know what rock is anymore, don’t come to tell me, “he continued.

However, he affirms that he decided to focus his energies and concentration on his project as a solo artist: “I’m so handy that I need it. The Wos has such a heavy project, the two projects are so heavy, that they don’t give me the hands to hold anything. I would have loved to continue with Wosito until death, I would have loved to arrive in Japan with Wos, but I would also love to arrive in Japan on my own, then we’re going to meet each other in Japan one day,” followed.

One of the constant references in his songs is to The Simpson. “As Bart Simpson you sold your soul”, he says in his song “Dust” that he published this year; in “Ola Mina” he appears dressed as the yellow family.

“The Simpsons is a folklore, I don’t know if it’s worldwide, but in Argentina it hit a lot. They were on open television, not paid and in my house we didn’t have paid TV and we watched the Simpsons. We all have Simpsons jokes in our DNA, Don’t come to tell me that you don’t know the Simpsons, because you do know them. I feel very identified with Bart Simpson, the Simpsons is a bible with all the characters that can be in a city. I love them, they are world folklore I think”, Explain.

What is your vision of the current urban scene in our country? “A year of trap is rock, it’s the new rock. Before they told you ‘you lack rock & roll’, now you lack trap. A whole year of trap, being on stage, being up all night making a mess, not sleeping, of living at an accelerated pace, that’s what I call trap. Over there for another person it means something else, but for me ‘trap’ is that, living it to the fullest, as much as possible, and there is a damn habit of not sleep, which brings capitalism and trap, which is all the same shit for me, but shit that I love, so I think it goes that way, “he analyzes.

For him, trap “is a language” with which many people feel represented, although he clarifies that he doesn’t like pigeonholing his music into genres: “I think I’m very degenerate, I don’t have a genre, the music I make doesn’t have a genre and the kids who are musicians too, aren’t going to do a genre because it’s boring, we don’t pigeonhole ourselves. If there is someone who pigeonholes it, it’s not even the people, it’s the one with the microphone in hand, the journalists perhaps, but I don’t pigeonhole myself as anything. Who knows what I am ” .

“Trap helped me… I learned to write much better because I come from writing a lot of lyrics. Being a ‘rapper’, a lot of lyrics and explaining a lot of thingsand the trap is summed up in a few words, air and dance, a few words and air, and that taught me to sharpen my aim and say what I want with a few words”, he concludes.

Ca7riel: “Before they told you ‘you lack rock & roll’, now you lack trap”