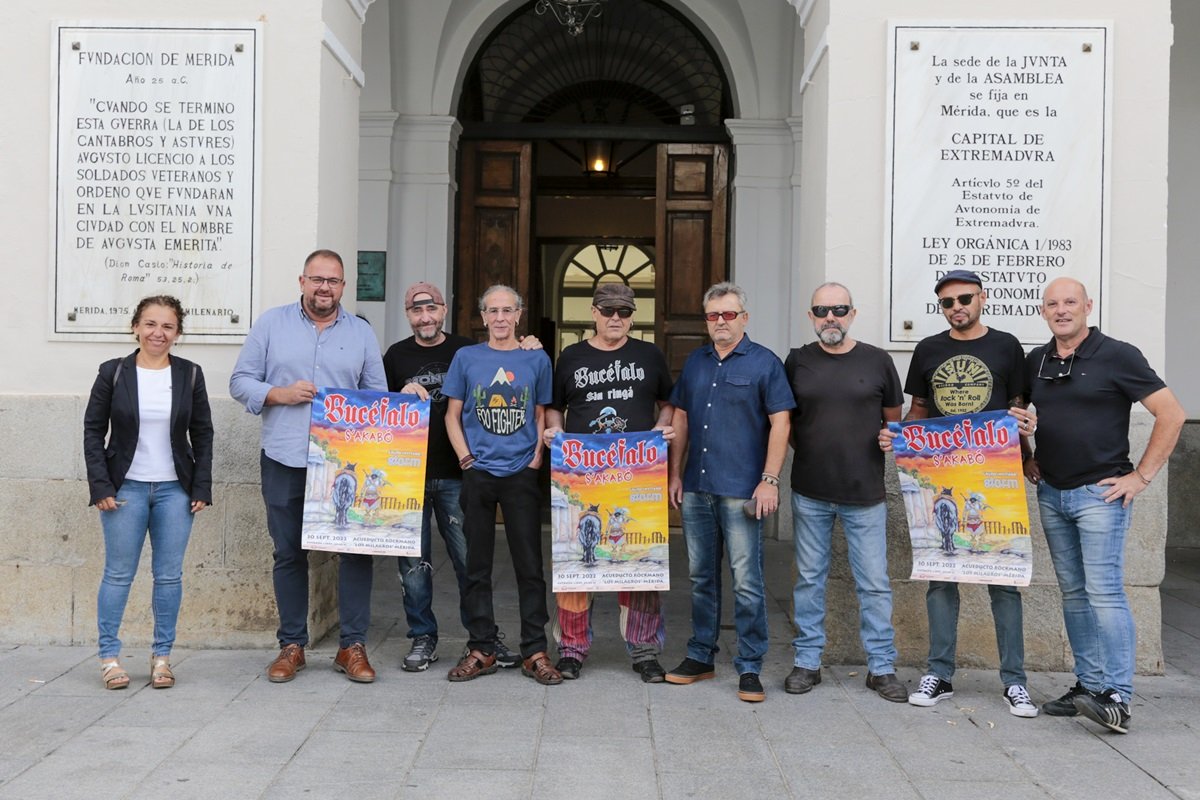 “It will be a first-rate event, very important for the city” highlights the mayor who has accompanied the group in the presentation of the show S´Akabó. “Bucephalus it is part of the history and heritage of Mérida; they are quite an institution” affirms Antonio Rodríguez Osuna.

“This concert is a recognition of the work and effort to maintain rock and culture in the city.” Antonio Rodríguez Osuna adds that “it will be a great show in a mythical place for culture and for the band like the Los Milagros Aqueduct”.

For his part, Carlinos Masegosa, from Bucephalus, explains that “already the rider stops riding but very calmly; the time has come, it is a stage that ends in which we have had the privilege of playing with almost all national and international bands, such as Scorpions; to say goodbye we have chosen a space that we inaugurated in 2008 and to this day the most beautiful space in the city for concerts”.

Bucephalus, one of the most recognized rock bands in the city of Mérida, says goodbye to the stage with a special concert in the city that saw them born after almost forty years in activity. With fourteen records, four nominations and an Honor Award at the Extremeña Music Awards, being the Golden Shield of the City of Mérida and having countless collaborations with the best rock groups on the national and international scene. (Rosendo, repeat offenders, Scorpions…), the founders of “Rockastúo” say, after a long musical career, their last goodbye.

For this, the Acueducto de los Milagros will witness the tribute that the band wants to pay to all its members, from the group’s precursors to its current members. And it is that, from the first recordings in the eighties to the last compilation of 2018, they are about forty years old.

The journey of the Bucephalus It began, back in the eighties, in the Sala Trajano de Mérida. At that time, the band was taking its first steps in the rock scene in Merida and Extremadura, with humble recordings on cassette. The last record work published by Bucephalus it is 35 (2018), a compilation CD of the group’s legacy from its birth to date.

Bucephalus ends its journey. At its last stop, at the “Rockmano” Aqueduct in Mérida, at 8:30 p.m., the group will give a show that will include Blas Barroso, Juan Flores “Chino”, Candi Sánchez Osuna, Vicente González, Joaquín Mora, Fali Gil , Paco Mata, Juan L. Parra, Javi Montero, Javier Cid, all the collaborating musicians of the group throughout all these years and, of course, with Carlinos Masegosa, mythical voice of the band.

The concert will also feature a performance by the historic Andalusian hard rock group Storm (8:30 p.m.). It will also count on the collaboration of the Youth Orchestra City of Mérida —directed by Pilar Vizcaíno Balsera —, by Nano Jiménez —drummer from Las Hurdes—, Manu Herrera —guitarist from magic queen —, and Alberto David —guitarist of Synkope —. A unique and special concert, which will put an end to the history of the band.

There will also be a contribution of funds for the Regional Parkinson’s Association, through solidarity glasses that will avoid plastic waste.