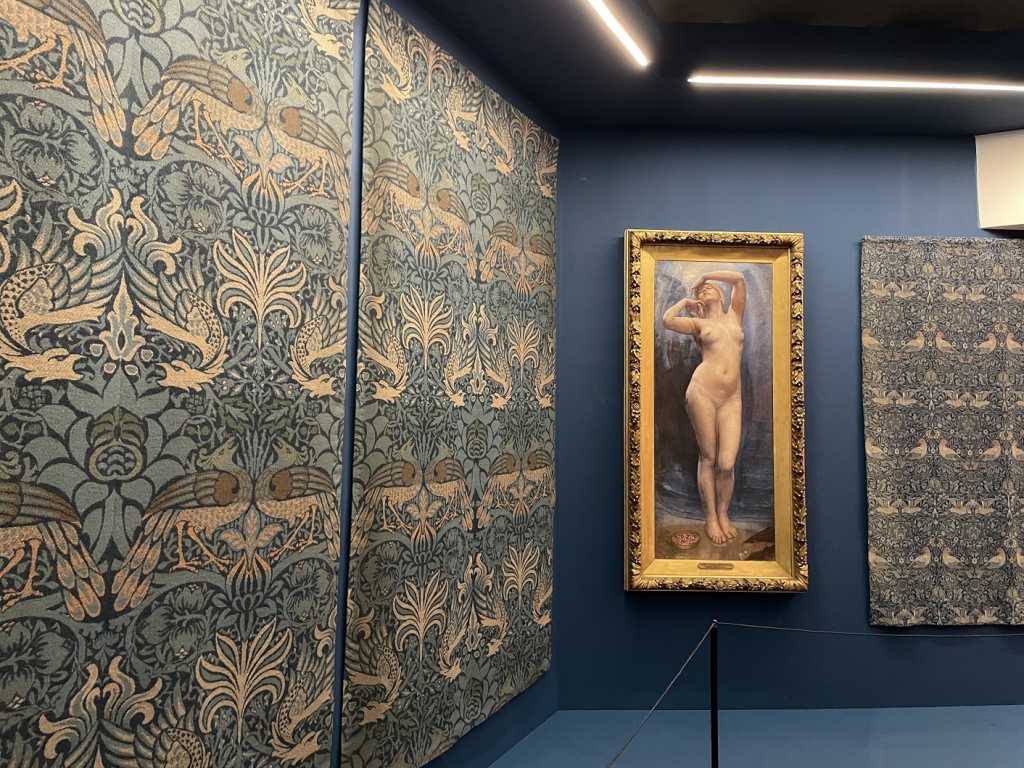 Until January 8, the Roubais museum dresses in the colors of England, through an unprecedented season of eight exhibitions. With in the center, the visionary and militant artist of the 19th century and around, contemporary artists, archives and works illustrating the historical link between Roubaix and the country across the Channel.

The next time you think you’re overwhelmed, think William Morris. The English artist has had a thousand lives and putting him in a box is like summing him up in a hair of a beard. In 62 years of existence (1834-1896), he was a fierce socialist-ecologist-feminist militant, a textile designer, a writer, a theoretician, a draftsman, an architect and we will stop there because the list is still long.

Honestly, we don’t even know if the 19th century artist had time to sleep. “He even created three typographiessays Sylvette Botella-Gaudichon, the curator of the exhibition. His doctor said he died of “having been William Morris”, that is, of having had too full a life..”

And for the first time, this multi-tasking and visionary artist is exhibited in France. At La Piscine de Roubaix to be exact, which offers an immersive 600m² exhibition including a hundred of his works and that of his band of Pre-Raphaelites (inspired by Italian masters before Raphael).

Attention, here when we speak to you about works, we speak to you about paintings but also about wallpapers, drawings, plan of a house with red bricks (the red house), books, sideboard,… “William Morris was part of a movement known today as Arts & Crafts, which championed art for everyone and in everything, including crafts. It is a current of thought born in reaction to the industrialization of the countrycontinues the exhibition curator. Morris spent his life in the Victorian era.”

Morris and his contemporaries

The museum does not stop there, since it offers around William Morris, a whole host of other exhibitions that connect him to his contemporaries in his ideas, his vision and his art. We thus discover the work of five artists working in Roubaix:

Luke Newton, the British artist who spends his life between Paris and Roubaix, echoes the commitment of William Morris against overconsumption and other failings of our society. “Morris is one of the first to have written on the concept of degrowth, on the fact that we were already consuming too much during the industrial era and that we were screwing up nature“, explains Sylvette Botella-Gaudichon.

Subjectively, what he does is as beautiful as it is disturbing. We can see skeletons and skulls made up of cardboard boxes, a guillotine whose blade is replaced by a heart… But also firearms in colored pencils, which will remind some of the Charlie Hebdo attack .

If one day you have the opportunity, take a walk a stone’s throw from the museum in the Green House where Hugo Laruelle’s studio is located. But before that, head to his exhibition at the Piscine, where the artist-photographer presents in a first room a collection of photos merging portrait and nature (and furniture), which gives the impression of being in an enchanted world…And which recalls one of the books by William Morris which gives the name to the exhibition.

In the cabins on the floor of the basin, we discover the clothes of the young designer of the “Maisons de la Mode”, who claims to be “out of fashion”. Worshiper of vintage, former rock critic, she offers a collection that finds its inspiration in the movement Arts & Craftsin culture clubbingwith references to Art Deco and Biba.

Humor, poetry and extravagance. This is what can sum up the artistic game of Pat le Sza (to be pronounced with a hair on the tongue) who has several people compose a sentence without any of them knowing what his or her collaborator has chosen previously. Nonsense british who criticizes the abundant and absurd consumption (it’s done with magazine sentences)…And who makes us all look like birds.

The artist offers a small world made of hypnotic ceramic plants that give the impression of being in a garden (or vegetable patch). With her, we cultivate our garden while taking care of nature.

The eight exhibitions are to be discovered at La Piscine de Roubaix until January 8th. The museum is located at 23 rue de l’Espérance. It is open Tuesday to Thursday from 11 a.m. to 6 p.m., Friday until 8 p.m. and Saturday and Sunday from 1 p.m. to 6 p.m. Count 11€ in normal price, 9€ in reduced price and it’s free for job seekers and social minima. More details on the museum website, Facebook and instagram.

At La Piscine de Roubaix, the season is intended to be “very British” with the artist William Morris