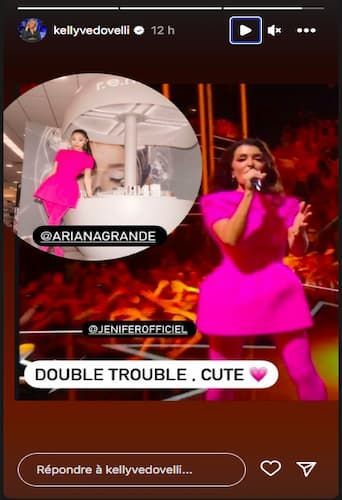 Icon of the program launched twenty-one years ago by the first channel, Jenifer made her big comeback this Saturday, October 15 on the stage of the “Star Academy”. In front of the thirteen new candidates who, from 18 to 28, could not know the first edition, the singer dazzled the public with an intense pink outfit to the tips of her nails. A “capsule” dress from designer Valentino’s new collection which displays the low price of 2,900 euros as well as incredible matching platform boots that can be afforded for the modest sum of 950 euros. A successful and radiant entry for the 39-year-old young woman, delighted and moved to perform a medley of her emblematic or more recent hits: “Ma Révolution”, “Au soleil”, “Give me time”, “J’ wait for love”, “Our idyll” then his last title “Sauve qui amour”… His performance, colorful, ignited the networks where one can read in particular: “Yaaaas queen Jenifer! All dressed in Valentino”, “Jenifer who wears Valentino the same outfit worn by Zendaya she said “it’s my moment”, “Jenifer in full Valentino … MAGNIFICENT“, “Jenifer who recovered the Valentino fall winter collection 22 is not possible”, “Jenifer who sings her biggest titles in Valentino, queen” as evidenced by Twitter. This evening really celebrated in style the big comeback of Jenifer, then in full promotion of her latest album.

For the occasion, and at the microphone of Nikos Aliagas, Ambroise Fieschi’s wife then turned to the new “academicians” to give them tender advice: “You’ll see, it’s going to be great, it’s going to be so interesting ! You have to use all the encounters you are going to make.” While also reminding them that it is above all necessary to have fun, to fully live the present moment, that even if it is a competition it is above all against oneself and that it is necessary to remain united with each other and finally… not projecting too much. Could she herself have imagined, 21 years ago, all the beautiful journey that awaited her? Under the influence of the collective emotion due to his magical reunion, no one then dared to imagine that there could be any trickery hidden behind this unique moment! No one except… Kelly Vedovelli! Indeed, the columnist of “TPMP” on C8, far from giving in to the general excitement haloing Jenifer’s original outfit, did not hesitate to draw a story on her Instagram revealing “the pot-au-rose”: the singer has completely pumped her look to Ariana Grande, photo in support! We had already spotted the dress on Zendaya, the shoes on the feet of the Kardashians, but the flashy pink integral has already been worn by the incredible 29-year-old American singer and actress! A minor fashionable event, some will judge, but which ultimately fits quite well with the recycling spirit currently reigning on television.

They dared to wear blue hair!