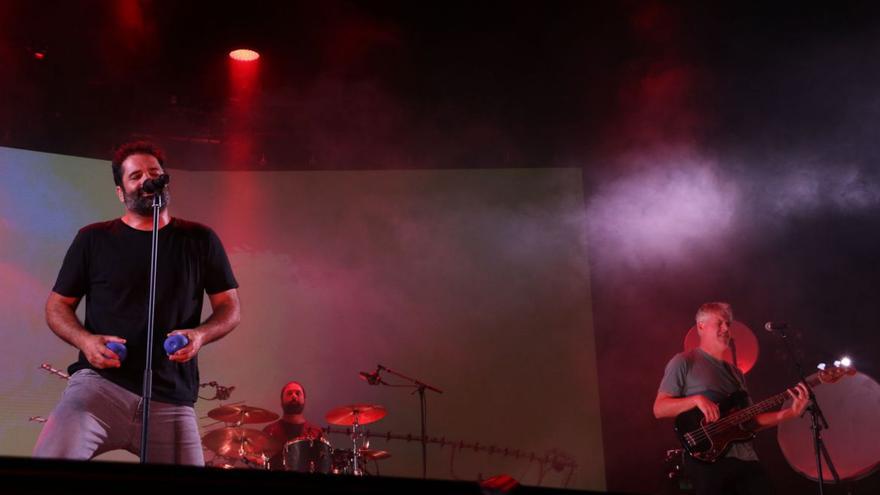 The Palau Sant Jordi in Barcelona has brought together this Saturday night one of the most anticipated concerts of the year: that of Antònia Font. The Mallorcan group unleashed the joy of the 15,000 attendees who sang at the top of their lungs with their great ‘hits’ such as Joy, Bathyscaphe Kattiuscas either I have spare paragraphs as if no time had passed. For more than two hours the galácticos have been linking one song after another with hardly any pause, as if they were in a hurry to include the most outstanding pieces of their extensive repertoire. According to their leader and guitarist, Joan Michael Oliver, With this performance the quintet reaches the “high point” of his career after eight years of silence. Next year they plan to perform another six concerts, still no date.

Past and present of the group have gotten along well live. They have stopped at their last job, One minute strobe, and they have treated the public to the best moments of their extensive songbook, with obligatory references to their compositional peaks, such as Clint Eastwood, Wa yeah!, Bamboo’, Vitamina Sol, Alpinistes-Samurais either Calgary 88.

Antònia Font enlairant the ‘Bathyscaphe Katiuscas’. And the public lived the song as if it were the last of our vines. Tremendissim tot. pic.twitter.com/oY7OIUTWTc

Among the public there were so many people who followed them from festival to festival in their beginnings, as well as young people who had never seen them live and who had discovered them through their parents. Minutes before the concert, some attendees told ACN what they expected to experience inside the stadium. Maria, a young woman who met the group through her motherI was expecting older and newer songs: “They’ll play a little bit of everything.” Alba, on the other hand, has celebrated being able to go to the concert with her daughters, to whom she has said that they are “very excited”. “We followed them for years when we were very young and our daughters, unfortunately, had not yet been able to see them live,” he explained.

This Saturday was not the first concert by Antònia Font de Joaquim, who has detailed that he already saw them a few years ago when they played at the Gran Teatre del Liceu, of which he has “a spectacular memory”. For this reason, he was “super happy” with the reunion of the group “and being able to see them live”. Also Júlia has said that she had already seen them before “perhaps ten years ago quietly” in the main festival of Terrassa, so the show at Sant Jordi makes him “illusion”.

to all of them, Oliver has thanked them for having “continued to work in silence to maintain the flame of Antònia Font” and make it grow “much more”. “The best of the scenarios that I had imagined was to fill the Palau Sant Jordi”, he celebrated. He has agreed in statements to the Catalan News Agency (ACN) the vocalist, Pau Debonwho He has assured “exultant” that the reunion has “exceeded all expectations”. “We knew there would be people, but we did not expect such an intense reception,” he summarized.

This Saturday’s Antònia Font have been at the same level as yesterday’s. They have been able to move both interpreting their best-known songs and the songs from their latest album, which have appeared scattered among the extensive repertoire of this long-awaited event that has lasted more than two hours. The attendees who have lived the concert, in which they have almost played forty songs, like a great party.

This was the second time that the band led by Joan Miquel Oliver, Pau Debon and company performed in Barcelona after eight years of silence. The first was in the summer, during Primavera Sound, which lasted just over an hour due to the time requirements of the festival. On this occasion, the quintet from the islands have been able to enjoy more extensively their reunion with the public. After performing at Primavera Sound, in Inca, in Valencia and this Saturday at the Palau Sant Jordi in Barcelona, ​​the group plans to perform six more concerts next year. For now Antònia Font has not wanted to reveal any details of these six performances that, in principle, will put an end to the career of the band led by Joan Miquel Oliver.